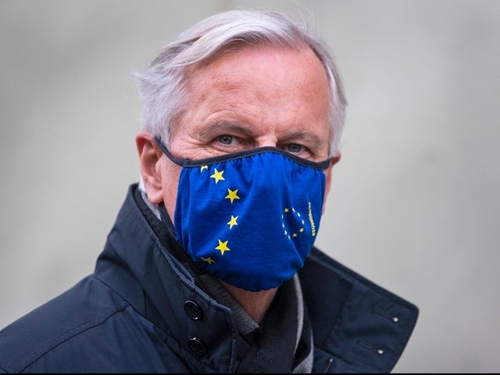 On October 15, the leaders of the 27 member states of the European Union, meeting as the European Council, took stock of the stalled negotiation between the EU and the UK that aims to conclude an agreement in regard to their future relationship in time for it to be ratified by all  parties and take effect when the UK leaves the EU’s single market and customs union at midnight on December 31. After hearing from the EU’s chief negotiator, Michel Barnier, the leaders invited him to continue negotiations in the coming weeks and called on the UK “to make the necessary moves to make an agreement possible.”

Not surprisingly, that comment, contained in the European Council’s written conclusions issued after the meeting, nearly derailed the negotiation. Lord David Frost, the UK’s chief negotiator, expressed his surprise and disappointment that the EU apparently was not only no longer interested in working intensively to conclude an agreement as had been agreed with European Commission President Ursula von der Leyen on October 3—the word “intensively,” referring to the negotiations and included in a draft of the conclusions, had been omitted from the final version—but evidently also believed that, in order to get an agreement, “all future moves must come from the UK.” It was, he said, “an unusual approach to conducting a negotiation.” He said Prime Minister Boris Johnson would set out the UK’s reactions and approach the next day.

The next day Johnson said that, in light of the European Council’s conclusions, the UK would proceed on the assumption there will be no agreement with the EU that will take effect after the UK leaves the single market and customs union. Referring to the EU’s Comprehensive Economic and Trade Agreement (CETA) with Canada, he said, “from the outset we were totally clear that we wanted nothing more complicated than a Canada-style relationship, based on friendship and free trade.” But “to judge by the latest EU summit in Brussels that won’t work for our EU partners. They want the continued ability to control our legislative freedom, our fisheries, in a way that is obviously unacceptable to an independent country. And since we have only ten weeks until the end of the transition period on January 1, I have to make a judgment about the likely outcome and to get us all ready. And given that they have refused to negotiate seriously for much of the last few months, and given that this summit appears explicitly to rule out a Canada-style deal, I have concluded that we should get ready for January 1 with arrangements that are more like Australia’s based on simple principles of global free trade….For whatever reason it is clear from the summit that after 45 years of membership they are not willing—unless there is some fundamental change of approach—to offer this country the same terms as Canada. And so with high hearts and complete confidence we will prepare to embrace the alternative…as an independent free trading nation, controlling our own borders, our fisheries, and setting our own laws.”

Immediately after the European Council meeting, Barnier said he had proposed that the negotiation continue in London and then in Brussels over the next two weeks. But after Johnson spoke, Frost told him not to come to London. Johnson’s spokesman later said, “There is only any point in Michel Barnier coming to London next week if he’s prepared to address all the issues on the basis of a legal text in an accelerated way, without the UK required to make all the moves….If not, there’s no point in coming. Trade talks are over. The EU have effectively ended them by saying they do not want to change their negotiating position. There was accordingly no basis for negotiations in London as of Monday.”

But the talks weren’t in fact over; several days later, on October 21, Barnier delivered a speech to the European Parliament in which he said the EU respects the UK’s sovereignty and that any agreement will require compromise by both sides. He told the MEPs the European Council “reaffirmed to our British partners and friends that, as we have always said, the EU wants an agreement that is to the mutual benefit of each party, that respects the autonomy and sovereignty of each party and that reflects a balanced compromise….We will seek the compromises that are needed from both sides to reach an agreement up to the last possible day….And as we stressed after the European Council, we are prepared to intensify discussions on all the issues and to do this on the basis of legal texts.”

After noting the EU’s principles in the negotiation – that the agreement respect its decision-making autonomy, the integrity of its internal market, and its long-term economic and political interests, Barnier said, “these principles are of course compatible with respect for British sovereignty, which is a legitimate concern of Boris Johnson’s government. What is at stake today in these negotiations is not the sovereignty of one side or the other. We have made it clear since the Political Declaration that any future agreement will respect the decision-making autonomy of the EU and the sovereignty of the UK….We have understood the red lines set out by Boris Johnson: on the role of the European Court of Justice; on the UK’s legislative autonomy; on fisheries. For nearly four months we have been working at the negotiating table to see how these red lines could be reconciled with our own principles and interests and with the desire to reach common agreement.”

Several hours later, the UK government issued a statement in which it said it heard in Barnier’s speech the “fundamental change in approach” it required in order to continue the negotiation and was ready to welcome the EU team to London. Barnier and Frost agreed the negotiations would be intensified, conducted across all of the issue-focused negotiating tables concurrently and conducted on a daily basis including weekends unless both sides agree otherwise. They also agreed the chief and/or deputy chief negotiators would meet in a restricted format as needed in order to consider the overall progress of the negotiations and particular issues arising from the negotiation tables. And they agreed that the initial phase would take place in London starting the next day through the end of the week and, thereafter, in London and Brussels either in person or via teleconference. Barnier arrived in London the next day, October 22, and the talks resumed and continued there until October 29, when they moved to Brussels.

On Wednesday, Barnier briefed the member states’ ambassadors to the EU and then the MEPs on the thirteen days of negotiation and it was apparent that, notwithstanding the intensified negotiation, the two sides are still sharply divided on the key issues standing in the way of an agreement. One involves the EU’s insistence that the UK maintain a “level playing field” for EU and British firms wherever they compete by adhering to EU rules pertaining to state subsidies and labor, health, and the environmental standards versus the UK’s insistence that it not be obliged to adhere to EU rules and standards, not be prevented from lowering those rules and standards through “non-regression” clauses, and, conversely, not be required to match any increases in EU rules and standards through “evolution” or “ratchet” clauses. A second key issue, less important in terms of the overall economy, given that it accounts for less than one percent of the British and EU GDPs, but highly important politically—and economically, for the people and ports that depend on it for their livelihoods—is fishing, which pits the EU’s insistence that the UK allow continued access by EU fishermen and women to British territorial waters and agree to negotiate multi-year basis quotas for catches of the more than 70 kinds of fish found in those waters versus the UK’s insistence that it be able to limit the access of EU fishermen and women to its waters, that quotas for EU catches in its waters be negotiated on an annual basis, and that the UK be able to reduce or eliminate EU quotas if the stocks of fish or livelihoods of British fishermen and women are threatened. A third key issue on which the two sides remain sharply divided involves the overall governance of agreement and, in particular, the means by which trade and other disputes between the EU and UK would be resolved and the role, if any, of the European Court of Justice or other EU institutions in the process of dispute resolution. The great hope of many that some kind of package deal could be agreed that exchanged concessions by one side on the level playing field issue for concessions by the other side on the fisheries issue has proven—thus far at least—to be illusory.

On Wednesday, Barnier tweeted, “Updating @Europarl EN & Member States on negotiations today. Despite EU efforts to find solutions, very serious divergences remain in Level Playing Field, Governance & Fisheries. These are essential conditions for any economic partnership. EU is prepared for all scenarios.” Frost concurred; he tweeted soon afterwards, “We’ve just finished two weeks of intensive talks with the EU. Progress made, but I agree with @MichelBarnier that wide divergences remain on some core issues. We continue to work to find solutions that fully respect UK sovereignty.” The talks have been paused for several days so that both sides can take stock of where things stand in the negotiation.

When the negotiation began, it was widely assumed that, in order for an agreement to be considered and approved, as it must be, by both the European and British Parliaments and then ratified by all of the EU member states in time to take effect at midnight on December 31, it would have to be completed by mid-October at the latest. As the negotiation continued, the target date shifted to the end of October. And now to sometime in November. The EU believes that if the European Parliament is to have sufficient time to review the agreement and the member states are then to have sufficient time to review and ratify it so it can take effect on Jan. 1, 2021, it will have to be completed at the very latest, within two weeks. Von der Leyen and Johnson will speak by phone tomorrow afternoon and take stock of the negotiation and what is needed in order to reach an agreement within two weeks. And on Sunday the talks will resume in London.