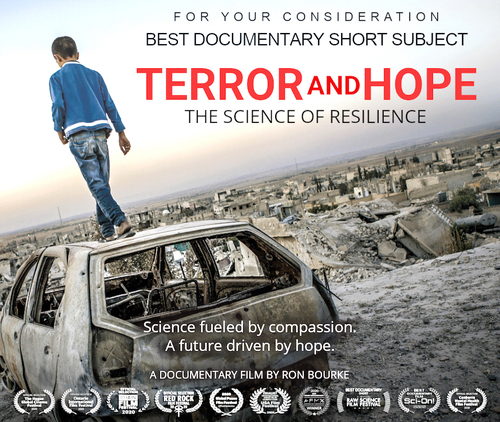 The short documentary Terror and Hope: The Science of Resilience won the Best Documentary Short jury award at the Raw Science Film Festival. Drawing from the pioneering work of an international team of scientists led by Catherine Panter-Brick at Yale University in partnership with Mercy Corps, We Love Reading, and international and local scholars in Jordan, the film offers a singular view into the impact of war on children. The 38-minute documentary was filmed by award-winning filmmaker, Ron Bourke.

“The science of stress and resilience now underpins the most effective mental health interventions,” said Professor Panter-Brick, the Bruce A. and Davi-Ellen Chabner Professor of Anthropology, Health, and Global Affairs. “And it clearly makes a difference to understand more about resilience—those who speak in the film tell us a story about trauma, but also about recovery and change. The film tells us about the brain, body, and soul responding to adversity.”

In the film, Mr. Bourke wanted to show to a general audience how science works on behalf of refugees in humanitarian settings. He showcased an example of ground-breaking research bridging academic and humanitarian sectors. The documentary features the voices of scientists, humanitarian staff, and Syrian refugee families who had been displaced to Jordan for over three years.

Terror and Hope premiered on World Refugee Day 2020 (June 20, 2020) in a global online screening. Since then, the film has garnered several Best Documentary awards with screenings at film festivals across the U.S. and internationally.

To read a review of the film and learn more about the research, visit the website.

On the issue of resilience and mental health, Professor Panter-Brick has been a keynote speaker at the United Nations, contributed to international media broadcasts, and presented to iNGO dissemination events, the World Health Organization, the World Bank, and the United States Institute of Peace. She leads research initiatives to develop effective partnerships between scholars, practitioners, and policymakers. At Yale, she directs the Program on Conflict, Resilience, and Health at the MacMillan Center, the Program on Stress and Family Resilience in the Department of Anthropology, and the multidisciplinary Program of Global Health Studies at the Jackson Institute of Global Affairs. She serves as Head of Morse College, one of Yale’s 14 residential colleges. She is also the Senior Editor (Medical Anthropology) of the interdisciplinary journal Social Science & Medicine and the President of the Human Biology Association.