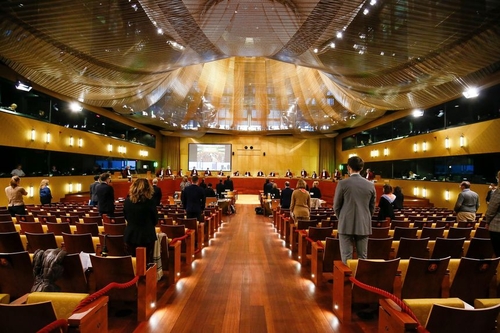 On Wednesday, the Court of Justice of the European Union (CJEU, more commonly ECJ) ordered Poland to pay the EU Commission a daily penalty of €1 million for failing to comply with an order on July 14 to adopt a series of interim measures pertaining to the Disciplinary Chamber of the Supreme Court. The order, coming as it does after Poland’s Constitutional Tribunal ruled in July that the ECJ could not impose interim measures pertaining to the country’s judicial system and then ruled earlier this month that several articles of the Treaty on European Union are inconsistent with Poland’s Constitution, further deepens the chasm that exists between Poland and the EU in regard to the rule of law. The penalty will remain in effect until Poland complies with the order or, if it fails to do so, until the Court delivers its final judgment in the case.

In December 2017, the Polish government, controlled since the 2015 election by the conservative and nationalist Law and Justice Party (PiS), enacted a law on its Supreme Court which took effect in April 2018. In April 2019, the Commission launched an infringement procedure against Poland on the grounds that the new disciplinary regime for judges described in the law undermined their judicial independence by not protecting them from political control. In particular, it said the new regime didn’t guarantee the independence and impartiality of the Disciplinary Chamber of the Supreme Court, which reviews decisions taken in disciplinary proceedings against judges. In October 2019, the Commission referred the case to the ECJ and in January 2020, it asked the ECJ to impose interim measures suspending the functioning of the Disciplinary Chamber. In April 2020, the ECJ ruled that Poland must immediately suspend the application of the provisions in the law pertaining to the powers of the Chamber with regard to disciplinary cases concerning judges until the ECJ rendered its final judgment in the case.

Poland refused to comply with the ruling and last December the Commission sent Poland a letter of formal notice that added a new grievance to the case, taking issue with the continued functioning of the Disciplinary Chamber. After concluding that Poland’s response to the letter wasn’t satisfactory, in March the Commission informed the ECJ that Poland “violates EU law by allowing the Disciplinary Chamber of the Supreme Court—the independence of which is not guaranteed— to take decisions that have a direct impact on judges and the way they exercise their function.” It asked the ECJ to order interim measures to “prevent the aggravation of serious and irreparable harm inflicted to judicial independence and the EU legal order.” Specifically, it asked the ECJ to suspend the provisions empowering the Chamber to decide on requests for lifting judicial immunity as well as on matters of employment, social security and retirement of judges; to suspend the effects of decisions already taken by the Chamber; and to suspend the provisions preventing Polish judges from directly applying provisions of EU law protecting judicial independence and from seeking preliminary rulings to the ECJ.

On July 14, the ECJ issued an emergency order upholding all of the Commission’s requests until the final verdict in the case was issued. That meant, the order said, that “Poland is obliged to immediately suspend application of domestic provisions relating in particular to the powers of the Disciplinary Chamber of the Supreme Court.” The next day, the ECJ issued its judgment in the case. It said that, “taken together, the particular context and objective circumstances in which the Disciplinary Chamber was created, the characteristics of that Chamber, and the way in which its members were appointed are such as to give rise to reasonable doubts in the minds of individuals as to the imperviousness of that body to external factors, in particular the direct or indirect influence of the Polish legislature and executive, and its neutrality with respect to the interests before it and, thus, are likely to lead to that body’s not being seen to be independent or impartial, which is likely to prejudice the trust which justice in a democratic society governed by the rule of law must inspire in those individuals….It follows, inter alia, that, by failing to guarantee the independence and impartiality of the Disciplinary Chamber…, by allowing the content of judicial decisions to be classified as a disciplinary offence…, by conferring on the President of the Disciplinary Chamber…the discretionary power to designate the disciplinary tribunal with jurisdiction at first instance in cases concerning judges….and, therefore, by failing to guarantee that disciplinary cases are examined by a tribunal ‘established by law’…within a reasonable time…, and by failing to guarantee respect for the rights of defence of accused judges…, the Republic of Poland has failed to fulfil its obligations under the second subparagraph of Article 19(1), TEU.” Article 19(1), which is one of the articles that Poland’s Tribunal ruled earlier this month is “inconsistent” with the Polish Constitution, states, “The Court of Justice of the European Union…shall ensure that in the interpretation and application of the Treaties the law is observed. Member States shall provide remedies sufficient to ensure effective legal protection in the fields covered by Union law.”

In addition, the Court found that by “allowing the right of courts and tribunals to submit requests for a preliminary ruling to the Court of Justice to be restricted by the possibility of triggering disciplinary proceedings, the Republic of Poland has failed to fulfil its obligations under the second and third paragraphs of Article 267, Treaty on the Functioning of the EU.” Article 267 states that the ECJ “shall have jurisdiction to give preliminary rulings concerning: (a) the interpretation of the Treaties; (b) the validity and interpretation of acts of the institutions, bodies, offices or agencies of the Union; Where such a question is raised before any court or tribunal of a Member State, that court or tribunal may, if it considers that a decision on the question is necessary to enable it to give judgment, request the Court to give a ruling thereon. Where any such question is raised in a case pending before a court or tribunal of a Member State against whose decisions there is no judicial remedy under national law, that court or tribunal shall bring the matter before the Court.”

On July 20, Commission Vice-President Vĕra Jourová announced the Commission had decided to empower Justice Commissioner Didier Reynders to adopt measures to induce Poland to comply with both the July 14 order and the July 15 judgment. She said the Commission had sent a letter to the Polish government, asking it to confirm that it would fully comply with the ECJ’s July 14 order in regard to the Disciplinary Chamber and stating that it must inform the Commission about the measures it anticipates will have that effect by August 16. Failing that, she said the Commission would request the ECJ to impose a penalty payment on Poland. Jourová also stated that if Poland didn’t confirm that it would take measures to fully comply with the ECJ’s July 15 judgment, the Commission would launch an infringement procedure under Article 260(2), which would allow it to ask for additional financial sanctions in that matter as well. On August 16, the Polish government informed the Commission that it “plans to dissolve the Disciplinary Chamber in its current form” and draft new regulations concerning a disciplinary system for judges as part of a wider reform of the judicial system in the coming months. But it also reiterated its view that the EU has no jurisdiction to interfere with the way Poland’s judicial system operates and said it would submit a motion to the ECJ for revocation of the interim measures it ordered in regard to the Disciplinary Chamber.

On September 7, after studying Poland’s response, the Commission said it was not persuaded Poland would in fact comply with the ECJ’s July 14 order and July 15 judgment. In regard to the July 14 order, it said, “Poland has not taken all the measures necessary to fully comply with the Court’s order. In particular, the provisions concerned by the order continue to be applied. For instance, the Polish authorities recently opened a disciplinary investigation against an ordinary court judge who applied the order of 14 July in a case pending before him. Moreover, the Disciplinary Chamber continues functioning.” The Commission decided to request the ECJ to impose financial penalties on Poland, in the form of substantial daily payments, in order to persuade it to comply with the July 14 order. In regard to the July 15 judgment, the Commission said, “Poland failed to take the necessary measures to implement it. Poland informed about the intention to dismantle the Disciplinary Chamber in its current form, but without providing any further details. For example, the President of the Disciplinary Chamber continued to designate disciplinary courts of first instance to hear disciplinary cases of ordinary court judges. If the Commission finds that the Polish reply to today’s letter of formal notice is not satisfactory as a next step, the Commission may bring the case, once more, before the Court of Justice.” That could, of course, result in an additional financial penalty.

On October 6, the ECJ dismissed Poland’s motion to revoke the interim measures it had ordered on July 14. On Wednesday, after stating that, “Compliance with the interim measures ordered on 14 July 2021 is necessary in order to avoid serious and irreparable harm to the legal order of the European Union and to the values on which that Union is founded, in particular that of the rule of law,” the ECJ announced that, “As it has not suspended the application of the provisions of national legislation relating, in particular, to the areas of jurisdiction of the Disciplinary Chamber of the Supreme Court, Poland is ordered to pay the European Commission a daily penalty payment in an amount of €1,000,000.” The daily payments, it said, will continue “until such time as that Member State complies with the obligations arising from the order of 14 July 2021 or, if it fails to do so, until the date of delivery of the final judgment.”

Poland evidently believes the political gains from refusing to comply with the ECJ order and judgment outweigh the cost of losing €1 million a day in addition to the €500,000 a day it is being charged, as of last month, for failing to comply with an ECJ order to shut down its huge Turów mine near its border with Germany and the Czech Republic. But there is, of course, much more at stake: The Commission has made it clear that it won’t approve Poland’s application for €36 billion in grants and loans from the EU’s Recovery and Resilience Facility until it complies with the ECJ’s order and judgment and, more broadly, with the rule of law. As an American senator supposedly once said, “A billion here, a billion there, pretty soon you’re talking about real money.”