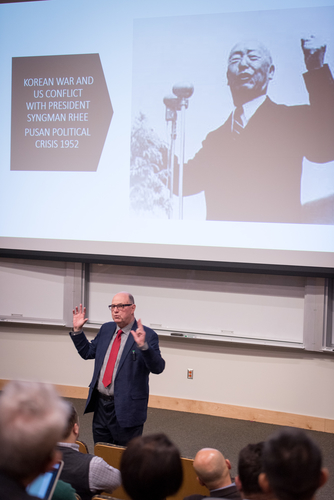 Professor Eckert was born in Chicago and trained in European ancient and medieval history at Lawrence College in Wisconsin and at Harvard. His Peace Corps experience in Seoul in the late 1960s and 1970s fostered in his interest in Korea and East Asia. After several years of working and studying in Korea, he returned to the United States for doctoral study in Korean and Japanese history at the University of Washington, Seattle. He has served as chairman for the Committee on Korean Studies for the Association for Asian Studies and on many other boards and committees including the Korea Foundation, the Asia Society, and the Korea Society.

A leading scholar in Korean Studies, Professor Eckert served as the director of the Korea Institute at Harvard for eleven years from 1993 to 2004. Under his direction and guidance, the Institute grew into one of Harvard’s most active and renowned international studies centers. Professor Eckert’s scholarship and service were recognized in 2004 by the Dean of the Faculty of Arts and Sciences at Harvard and he was appointed the first Yoon Se Young Professor of Korean History. Professor Eckert continues to serve the undergraduate community at Harvard in various commitments to education abroad programs and offering his popular course, “The Two Koreas.” Many of his graduate student mentees have continued on to head major Korean studies programs in North America and around the world.

Professor Eckert’s book, Offspring of Empire: The Colonial Origins of Korean Capitalism 1876-1945, won the John K. Fairbank Prize in East Asian History from the American Historical Association and the John Whitney Hall Book Prize from the Association for Asian Studies. He has also co-authored the widely used university textbook on Korean history, Korea Old and New: A History. Currently his research engages the study of Korean militarization and the rise of Korean militarism.

For the Seong-Yawng Park GRD ‘65 and Marguerite Clark Park Memorial Lecture, Professor Eckert’s talk was titled “Back to the Future in a U.S. Satellite: Park Chung Hee and the May 16 (1961) Coup: A Genealogy.” It centered around his current research on the roots of militarism in South Korea and its connection with South Korean national “modernization” as it was conceived and carried out under the Park Chung Hee regime of the 1960s and 1970s. The first volume of Professor Eckert’s project, Park Chung Hee and Modern Korea, is titled The Roots of Militarism 1866-1945. He linked South Korean militarism to the culture and practices of the Japanese-controlled Manchukuo Army where Park had served in the 1940s. He expanded upon this as the central focus on the second volume of his project where he explores the ways militarism was reinforced and reconfigured in the Republic of Korea Army and South Korea in the 1950s under American hegemony therefore providing a broader context for the 1961 coup led by Park Chung Hee.

The Council on East Asian Studies was excited to welcome Professor Eckert to Yale’s campus, and the warm reception that followed showed the growing interest in Korean Studies at Yale University as the Korean studies program continues to grow. Professor Eckert’s scholarship and contribution undoubtedly has left its mark on the community at Yale as it looks forward to continue forging strong relationships and building community with East Asia.