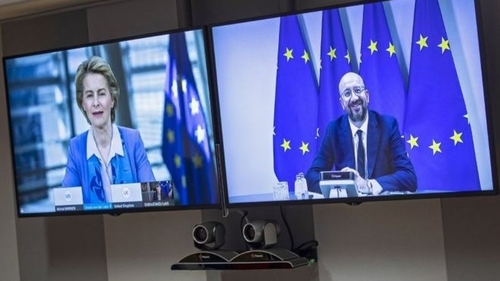 When the EU and UK concluded their fourth week-long round of negotiation of an agreement about their future relationship on June 5, it appeared the negotiation was stalemated. Michel Barnier, the EU’s chief negotiator, said, as he had after the earlier rounds, there was no substantial progress and, indeed, had been no substantial progress since the beginning of the negotiations. David Frost, the UK’s chief negotiator, likewise noted that, although the talks had been positive in tone, progress remained limited. Given that any agreement must be completed by the end of October in order to allow the governments and parliaments of the EU’s 27 member states sufficient time to examine and presumably ratify it prior to midnight on December 31, when the UK will exit the EU’s Single Market and Customs Union, it appeared increasingly likely the UK would exit without an agreement and, as a result, would suffer the dire economic consequences of a no-deal Brexit on top of the extraordinary impact of the COVID-19 pandemic.

That may of course happen. But after several developments over the past week—most notably, an important speech by Barnier last Wednesday that, while underscoring the position of the EU, suggested a willingness to compromise on one of the key points of contention; a decision last Thursday by the UK and EU to significantly intensify the negotiations and to schedule for today the high-level conference between Prime Minister Boris Johnson and European Council President Charles Michel, European Commission President Ursula von der Leyen and European Parliament President David Sassoli; and a reasonably productive meeting Friday of the Joint Committee, which oversees the implementation of the EU-UK Withdrawal Agreement—it seems more likely today than it did two weeks ago that the UK and the EU will, notwithstanding the lack of progress to date, conclude an agreement in time to avoid a no-deal Brexit.

Last Wednesday, Barnier gave a speech to a plenary session of the EU’s European Economic and Social Committee in which he updated the committee on the progress (or lack thereof) in the negotiation. He focused on four domains in which, he said, the British negotiators refused to engage in serious discussion with the EU—the level playing field (i.e., rules of economic and commercial fair play), fishing, police and judicial cooperation, and the governance of the future relationship—but noted also the UK’s “lack of ambition and engagement” in other areas such as foreign policy and defense, money laundering, cybersecurity, and, in regard to questions of mobility, mechanisms for consultation between the British and European parliaments.

After noting that he had proposed to Frost an intensification of the negotiations, he highlighted three essential points in the mandate the EU 27 had set for the negotiation—first, ensuring a level playing field between the UK and UK in their economic and commercial competition; second, rejecting any attempt by the UK to cherry-pick some of the benefits of the Single Market; and third, recognizing that, however good the agreement may be, the trade relationship won’t be what it is today and the UK will lose some benefits such as the financial services passports. After noting that an economic partnership as ambitious as the one being sought by the EU and UK must rest on fair and equitable competition—a level playing field—he said the British negotiators refuse to agree, as the UK did in article 77 of last October’s Political Declaration setting out the framework for the future relationship, to “uphold the common high standards applicable in the Union and the UK at the end of the transition period in the areas of state aid, competition, social and employment standards, environment, climate change, and relevant tax matters.” Importantly, he said he is ready to find compromises on that subject. But it is necessary that the British accept that the Political Declaration, which was negotiated point by point with Boris Johnson, is a precise text that must now be translated into legal form. He also made it clear that, in contrast to the UK’s demand that the EU change its mandate, the existing mandate is sufficiently flexible to find compromises and there’s no need to change or adjust it: “We can find the necessary compromises, on the condition that the UK changes its approach and accepts a proper balance of rights, benefits, obligations and legally binding constraints, based on the respect of the agreed Political Declaration of last October. That declaration is the only valid starting point for the negotiations.” His position with respect to the mandate was reaffirmed in a closed meeting with the EU 27 ambassadors.

The same day, the UK and EU agreed that the high-level conference between the leaders of the UK and EU called for in the Political Declaration to take stock of the negotiation would take place via video conference today, involving Johnson, Michel, von der Leyen and Sassoli. The EU had been pressing for some time for the UK to agree to hold the conference today but the UK had refused until the EU reconsidered its position on some of the more contentious issues—most notably, the level playing field issue. Although the EU reaffirmed its current mandate, after Barnier signaled in his speech a willingness to compromise on the level playing field issue and proposed a significant intensification of the negotiation, Johnson agreed to scheduling it today.

Last Friday, the Joint Committee, the body created by the Withdrawal Agreement, that oversees the implementation of the Agreement, met for the second time. The committee, co-chaired by European Commission Vice President Maroš Šefčovič and UK Chancellor of the Duchy of Lancaster and Cabinet Office minister Michael Gove, joined by Barnier as well as the representatives of 15 member states, met to take stock of the progress made since its last meeting in March in regard to the implementation and application of the Withdrawal Agreement. Emphasizing as it had in March the need for the UK to set out how it will fulfill its obligations under the Protocol on Ireland/Northern Ireland contained within the Agreement, it welcomed the UK’s publication last month of its Command Paper setting out its approach as an “important step in reflecting the commitment of the UK authorities in the implementation of this Protocol.”

In his press statement following the meeting, Šefčovič, noting that the Protocol must function as intended on Jan. 1, 2021, said the UK’s paper “does not provide sufficient operational details. We need to move from aspiration to operation—and fast.” Specifically, that means, he said, meeting all of the requirements of the Protocol, including putting in place all the necessary checks and controls for goods entering Northern Ireland from Great Britain, applying EU rules on customs and sanitary and phytosanitary protection, and—a controversial point—enabling the EU to effectively exercise its right to be present during any activities of the UK authorities related to the implementation and application of the customs provisions of the Protocol. That said, Šefčovič did thank Gove and his team for the constructive attitude and underscored the fact that the meeting took place in a “very good atmosphere” and arrived at “some positive results, which I believe would pave the way forward for the proper implementation of the Withdrawal Agreement.”

Article 132 of the Withdrawal Agreement allows the Joint Committee to adopt, prior to July 1, a decision to extend the transition period from December 31 to December 31, 2021 or 2022, and there have been calls for an extension from several leaders of other British parties, the Scottish and Welsh governments, and many others. But the UK has made it clear on many occasions that it wouldn’t ask for one and, to underscore that position, added a clause to the European Union (Withdrawal Agreement) Act 2020 that prohibits a minister—e.g., Gove—from agreeing to an extension in the Joint Committee. Almost as an afterthought in his statement after the meeting, Šefčovič noted that Gove had confirmed that the UK will not consider an extension. That being the case, he said he and Gove had agreed on accelerating the implementation of the Withdrawal Agreement and the work of the Committee—specifically its work in implementing the Protocol.

This afternoon Johnson, accompanied by Gove and Frost, met via videoconference with Michel, von der Leyen and Sassoli to take stock of the progress thus far in the negotiation and agree on actions to move forward in the negotiation. Following the meeting, they issued a joint statement in which they noted the UK’s decision not to request an extension of the transition period, which will therefore end on December 31, and welcomed the “constructive discussions” that had taken place in the four rounds of negotiation that have taken place since early March, despite the challenges presented by the pandemic. But they agreed that “new momentum was required” and supported the plans agreed by Barnier and Frost to intensify the talks in July and to create the most conducive conditions for concluding and ratifying a deal before the end of 2020. This should include, if possible, they said, “finding an early understanding on the principles underlying any agreement.” In concluding, they underlined their intention “to work hard to deliver a relationship, which would work in the interests of the citizens of the Union and of the UK” and confirmed their commitment to “full and timely” implementation of the Withdrawal Agreement.

The language in the joint statement is standard diplomatese and lacks specifics in regard to the issues that have divided the parties over the past three months. Nevertheless, it does convey their shared ambition to negotiate an agreement and their willingness to dramatically increase the intensity of the negotiation in order to achieve that objective. That doesn’t mean they’ll succeed. But after three months of hearing, after each of the four week-long rounds of negotiation, that there had been no progress, the agreement to dramatically intensify the negotiation is welcome news. It would, of course, have been much better if the UK had also agreed to extend the transition period to the end of 2021 or 2022. But perhaps the looming cliff-edge of a no-deal exit from the Single Market and Customs Union on December 31 will focus the attention of both sides on the compromises that will be needed if an agreement is to be concluded by the end of October.