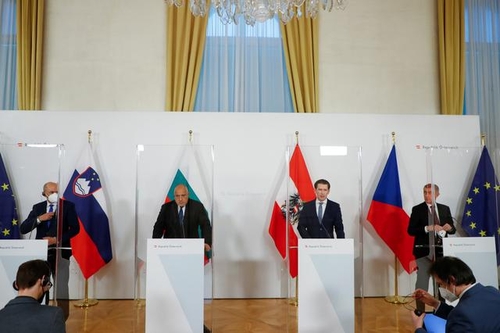 Speaking two weeks before the March 25-26 video conference of the European Council, the heads of state or government of the 27 member states of the European Union, Austrian Chancellor Sebastian Kurz levelled a strong critique of the EU’s system for distributing Covid vaccines among the member states. The vaccines, he said, were not being distributed by the EU’s vaccination steering board according to the agreed-upon pro-rata scheme based on population, there was no transparency or accountability in regard to the board’s decisions, and it was, in effect, running a “bazaar” – his word – in which extra agreements were being made between the pharma companies and some of the member states.

Several days later, on Mar. 16, after meeting in Vienna to discuss the issue and a possible “correction mechanism,” Kurz and the leaders of Bulgaria, Croatia, the Czech Republic, Latvia and Slovenia wrote to European Council President Charles Michel and European Commission President Ursula von der Leyen. Complaining that deliveries of vaccine “are not being implemented on an equal basis following the pro rata population key” and that if the current system continued it would exacerbate the “huge disparities” that already exist among the member states, they called for the issue to be considered at the upcoming European Council meeting and a “correction mechanism” to be adopted.

The Commission disputed what the leaders said, claiming there is full transparency in regard to the operations of the board and that it wasn’t running a “bazaar.” It pointed out that some countries have opted out of buying all of the vaccine doses they could have bought as they became available because they preferred, for reasons of price and/or ease of transportation and storage, to purchase doses produced by some other company – a reference to the decision by a number of central and eastern European states to opt out of possible purchases of the BioNTech-Pfizer vaccine in favor of the AstraZeneca vaccine, which was cheaper and didn’t have to be stored at extremely low temperatures but which has been plagued not only with uncertainty in regard to whether it may cause blood clots but also with very substantial shortfalls in deliveries. It also noted that the states had agreed that when states opt out of purchases, their shares can be allocated on a pro-rata basis among the other states willing to purchase them.

Whether by coincidence or in an effort to address the issue in advance of the European Council meeting, which already had a full agenda of difficult issues, including the shortage of doses caused by AstraZeneca’s inability to deliver the doses it had agreed to deliver in the first quarter and a strategic review of the EU’s relationship with Russia, on March 16 – the same day Kurz and the other leaders met in Vienna and voiced their concerns about the Commission’s distribution of vaccine doses – von der Leyen announced the Commission and BioNTech-Pfizer had agreed to accelerate the delivery of an additional 10 million doses in the second quarter. In February, the Commission had contracted with the company to purchase 200 million doses, of which 75 million would be delivered in the second quarter, with an option to purchase an additional 100 million doses. It exercised the option in order to obtain the 10 million additional doses in the second quarter.

Kurz and the other leaders immediately demanded that the additional 10 million doses be allocated to the six central and eastern European member states – a demand that, not surprisingly, was immediately rejected by several other leaders who reminded Kurz et al. of their earlier agreement that all doses would be allocated to all of the states that wished to receive doses on a pro-rata basis relative to their share of the EU population. The issue was discussed at considerable length – at times heatedly – at the videoconference meeting of the European Council on March 25. Kurz’s demand that more than half of the 10 million doses be allocated to Austria, the Czech Republic and Croatia was rejected by other leaders who argued that the additional doses should be allocated to the member states with the lowest rates of vaccination – for example, Bulgaria, Croatia and Latvia, all of which had rates well below Austria’s. After several hours of discussion, the leaders confirmed the pro-rata population key for the allocation of the additional doses and invited the Committee of Permanent Representatives “to address the issue of the speed of deliveries of vaccines when allocating the 10 million BioNTech-Pfizer accelerated doses in the second quarter of 2021 in a spirit of solidarity.”

Last Thursday, the Committee of Permanent Representatives met and considered a proposal put forward by the Portuguese Presidency that would allow for a “meaningful expression of solidarity through the distribution of close to 3 million vaccines to the member states most in need.” According to the proposal, which was eventually agreed by the Committee, the 10 million BioNTech-Pfizer doses will initially be allocated to all 27 member states on a strictly pro-rata population basis. But 19 of the 27 – Belgium, Cyprus, Denmark, Finland, France, Germany, Greece, Hungary, Ireland, Italy, Lithuania, Luxembourg, Malta, Netherlands, Poland, Portugal, Romania, Spain and Sweden – agreed they will then contribute one-third of their initial allocation to a pool of doses that will be allocated on a pro-rata basis to Bulgaria, Croatia, Estonia, Latvia and Slovakia. Those five will thus receive an additional 2.85 million doses as “solidarity vaccines” in addition to their initial pro-rata allocation of the 10 million doses among all 27 member states. Austria, the Czech Republic and Slovenia chose not to contribute one-third of their initial allocation to the “solidarity” pool and therefore will receive their full initial pro-rata shares of the 10 million doses. Austria said it rejected the proposal out of solidarity with the Czech Republic, which has one of the highest and most rapidly-increasing rates of Covid infection and death in the EU.

The effort by most of the EU member states to provide additional assistance to some of the states hardest hit by the Covid pandemic, at least in part because the vaccine doses they had counted on receiving from AstraZeneca weren’t delivered, is undoubtedly commendable. But it is only one small step – a reallocation of less than 3 million doses – and much more assistance is needed, especially for those states – most notably, Bulgaria, the Czech Republic, Estonia, Hungary and Poland – in which the already-high number of new cases reported each day is increasing rapidly.

The EU’s European Centre for Disease Prevention and Control (ECDC) reports the number of cases and deaths each day in each state. In order to allow a comparison of the rate of infection and death among countries that vary widely in population and to smooth out the inevitable day-to-day fluctuations in cases, it reports each day the 14-day moving average of the number of new infections per 100,000 population in each state. The ECDC reports that, as of last Thursday, the most recent 14-day average of the number of new infections each day per 100,000 of population was 1364 in Estonia, 1197 in Hungary, 1069 in the Czech Republic, 923 in Poland, 722 in Bulgaria, 704 in France, 687 in Sweden, 591 in Slovenia, 554 in the Netherlands, 547 in Belgium, 518 in Italy, and 481 in Austria. The ECDC also reported that the 14-day moving average of the number of daily infections per 100,000 of population in the UK was 110 and in the U.S. 253 – meaning that many of the EU member states are experiencing daily rates of infection that are several times the rates being experienced in the UK and U.S.

That many EU states have rates of infection that are substantially greater than those in the U.S. and U.K. reflects, to a large extent, the lagging pace of vaccinations in the EU that can be attributed, at least in part, to the substantial shortfalls in AstraZeneca’s delivery of its vaccine. The Oxford-based Our World in Data project reports that as of Friday, 46 percent of the British population and 31 percent of the American population had received at least one dose. The ECDC reports that as of last Friday 13.9 percent of all adults over the age of 18 in the EU had received a first dose and 5.9 percent had received a second dose. Those figures were 12.9 and 5.6 in Germany, 14.8 and 5.0 in France, 13.9 and 6.3 in Italy, and 13.6 and 7.0 in Spain. Among the countries hardest hit by new infections, the figures were 19.0 and 5.9 in Estonia, 25.5 and 9.8 in Hungary (an anomaly reflecting its extensive use of Russia’s Sputnik V vaccine despite the fact that it hasn’t been approved for use by the EU), 15.7 and 5.9 for Slovakia, which also received Russia’s Sputnik V vaccine (a decision that created a political uproar and led to the resignation of the prime minister), 13.0 and 5.1 in the Czech Republic, 14.0 and 6.6 in Poland, 13.4 and 6.5 in Slovenia, 11.4 and 2.6 for Croatia, 6.6 and 1.6 in Bulgaria, and 6.7 and 1.4 in Latvia. Austria’s rates of 16.3 and 6.0 were higher than four of the five – all but Estonia – that received the “solidarity vaccines.”

As von der Leyen has said more than once, Europe is clearly in the midst of a brutal third wave and has fallen badly behind the UK and U.S. in its pace and extent of vaccination. Some of the EU member states – most notably, several in central and eastern Europe that are experiencing unusually high rates of infection coupled with relatively low rates of vaccination – could benefit from more “vaccine solidarity.” But what they and all of the EU member states need most of all is more vaccine.