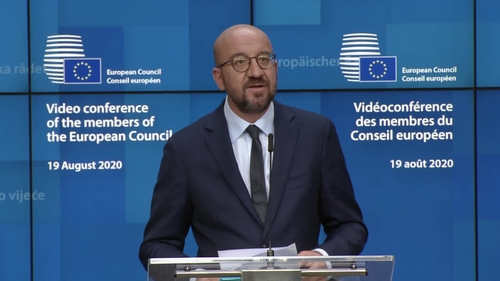 On August 9, Aleksandr Lukashenko was elected to his sixth term as president of Belarus, a position he has held since 1994. According to the Central Election Commission, he received 80.1 percent of the vote and his principal challenger, Svetlana Tikhanovskaya, who entered the race after her husband Sergei, a dissident activist and blogger, was arrested in May after announcing his intention to run against Lukashenko, received 10.1 percent of the vote. When the preliminary results were announced that evening, there were widespread protests, to which the riot police and interior ministry forces responded with force and arrested more than 1,000 protesters.

The next day, Tikhanovskaya went to the Commission to file a complaint about the conduct of the election. She was detained for seven hours and forced to make a video statement calling on her supporters to accept the results and stop the protests, in exchange for which her campaign manager, who had been detained three days earlier, was released and she was allowed to leave the country and rejoin her children in Lithuania, where they had been sent after threats were made against them. Tikhanovskaya’s obviously-forced video statement, coupled with the brutal treatment of the protesters and the mass arrests, fueled protests which continued on a daily basis in Minsk and other cities – protests that were met with more force, including deadly force, and more arrests. By last Thursday, more than 6,700 had been arrested. As the protests continued, they were accompanied, importantly, by strikes of workers in many industrial plants, staff walk-outs from the state-controlled media, and even some resignations from police units. This past Sunday, more than 200,000 protesters assembled in Minsk, and among them, as in the earlier protests and strikes, the chants heard most frequently, directed at Lukashenko, were “Leave,” “Get Out,” “Go Away.”

Last Tuesday, in a Declaration on behalf of the EU, Josep Borrell, the EU’s High Representative for Foreign Affairs and Security Policy, said, “the elections were neither free nor fair… credible reports of domestic observers show that the electoral process did not met the international standards expected of an OSCE participating state.” And, he said, “State authorities deployed disproportionate and unacceptable violence…Thousands of people were detained and the crackdown on freedoms of assembly, media and expression intensified. We call on the Belarusian authorities to release immediately and unconditionally all detained.” He said the EU would be assessing the authorities’ actions and conducting an in-depth review of the EU’s relations with Belarus which “may include, inter alia, taking measures against those responsible for the observed violence, unjustified arrests, and falsification of election results.”

Last Friday, the EU’s Foreign Affairs Council, consisting of the foreign ministers of the 27 member states, met to consider the situation. According to the statement released after the meeting, the ministers “reiterated their repeated call to the Belarusian authorities to stop the disproportionate and unacceptable violence against peaceful protesters and to release those detained…and reiterated that the elections were neither free nor fair. The European Union considers the results to have been falsified and therefore does not accept the results of the election as presented by the Belarus Central Election Commission. The European Union will therefore put forward to the Belarusian authorities a proposal for EU support in establishing and facilitating a dialogue between the political authorities, opposition and broader society in view of resolving the current crisis.” Finally, and most controversially, the ministers “also agreed on the need to sanction those responsible for violence, repression and the falsification of election results. The work on additional listings within the existing sanctions framework for Belarus will start immediately.”

The EU has imposed sanctions on Belarus on several occasions in the past. In 2004, it applied sanctions as a result of the disappearance of two opposition politicians and two other individuals in 1999 and 2000. In 2011, it applied sanctions on individuals who violated international electoral standards and human rights laws in a crackdown after the 2010 election on the democratic opposition and imposed an arms embargo on equipment that could be used for internal repression. In 2016, after Belarus had released a number of political prisoners, it lifted the sanctions on 170 individuals and four companies but retained the arms embargo and the asset freeze and travel ban on four individuals. In February, it continued those sanctions for another year.

The problem with sanctions, of course, is that their imposition requires the unanimous support of the 27 member states and one leader—Hungarian Prime Minister Viktor Orbán—has already gone on record, in a visit to Minsk in June, as favoring termination of the existing sanctions and has made known his strong opposition to the imposition of new sanctions on Belarus. With that in mind, Poland, the Czech Republic, Estonia, Latvia, Lithuania and Denmark issued a joint letter calling for “restrictive measures”—a euphemism that could include sanctions but might avoid provoking Orbán’s opposition—against the Belarusian officials responsible for the election result and the treatment of those detained in the protests. Nevertheless, there were strong voices in the EU—most notably, from Germany, which holds the rotating six-month rotating presidency of the Council of Ministers—calling for sanctions and, at last Friday’s meeting, the foreign ministers agreed that Borrell’s office will draw up a list of the Belarusian officials and organizations it believes were responsible for the arrests and detention of the protesters and should be sanctioned. They did so despite the threat of a Hungarian veto once the list is prepared and despite the fact that last Thursday evening the Belarus interior minister took responsibility for the detentions and the injuries inflicted on those arrested and the authorities began releasing those detained the next morning.

On Monday, Charles Michel, the President of the European Council, called a video conference of the 27 EU heads of state or government yesterday to address the evolving situation in Belarus. In his letter to the leaders, he said, “What we have witnessed in Belarus is not acceptable. The 9 August elections were neither free nor fair. The subsequent violence against peaceful protesters was shocking and has to be condemned. Those responsible must be held to account. The EU has started work on sanctions. The people of Belarus have the right to determine their own future. To allow for this, violence has to stop and a peaceful and inclusive dialogue has to be launched. The leadership of Belarus must reflect the will of the people. There should be no outside interference. Based on these principles, we will discuss how best to respond to the evolving situation in Belarus.”

In yesterday’s video conference, the EU leaders concluded the presidential elections “were neither free nor fair, therefore we do not recognise the results,” and expressed their “clear solidarity with the people of Belarus in their desire to exercise their fundamental democratic rights.” They condemned the “disproportionate and unacceptable violence displayed by the state authorities against peaceful protesters,” said “violence must be avoided and all those unlawfully detained must be immediately and unconditionally released,” and said, “civil society and opposition actors engaged in discussions of political transition must be protected from arbitrary arrests and violence.” They announced that, in accord with the foreign ministers’ decision, the EU will shortly impose sanctions against “a substantial number of individuals responsible for violence, repression and the falsification of election results.” Looking forward, the leaders called on the Belarusian authorities “to find a way out of the crisis through an end to violence, de-escalation, and an inclusive national dialogue. Only a peaceful and democratic process, underpinned by independent and free media and a strong civil society, can provide sustainable solutions. All parties, including third parties, should support such a process.” Finally, they said the EU fully supports OSCE proposals for dialogue in Belarus and is ready to provide assistance to further them. Reinforcing the EU message, the presidents of Poland, Hungary, the Czech Republic, and Slovakia called on Belarus yesterday to “open the way for a political solution, and to abide by the fundamental human rights and freedoms while refraining from the use of violence against the peaceful demonstrators.”

It’s clear that the only way to resolve the crisis in Belarus is by holding a new presidential election, one that is overseen by the OSCE and is free of fraud and conducted fairly. That, of course, is exactly what Tikhanovskaya wants, as she made clear in a video yesterday in which, addressing herself in English to the EU leaders and after noting that “Mr. Lukashenko has lost all legitimacy in the eyes of our nation and the world,” she reiterated what she first proposed last Friday: “In order to facilitate the peaceful transition of power in my country, I have initiated the National Coordination Council of Belarus. It will lead the process of peaceful transition of power via dialogue. It will immediately call for a new, fair, and democratic presidential election with international supervision.”

One individual, sitting in his office about 450 miles to the east—an individual who, like Lukashenko, has used a referendum on constitutional amendments to extend his time in office—will be watching with interest and some apprehension how the Belarusian crisis unfolds. In January, Russian President Vladimir Putin, who was elected for a four-year term in 2000, reelected in 2004, and then, after switching positions with Prime Minister Dmitri Medvedev in 2008 and enacting legislation that extended the presidential term to six years, was elected to a six-year term in 2012 and a second term in 2018, proposed a number of constitutional amendments, including one that would enable him to serve two six-year terms after his current term runs out in 2024. Approved by 79 percent in a referendum that took place from June 25 to July 1, that amendment means he could remain in office until 2036.

The EU clearly understands that Belarus is not another Ukraine and that the recent events in Belarus do not presage another Maidan 2014 that resulted in a late-night flight to Russia of the president, a new government formed by the opposition parties, and the election of a new president who, among other things, signed an Association Agreement with the EU. It knows that in 1997 Belarus and Russia signed a treaty forming a Union and in 1999 signed a treaty forming a Union State that took effect in 2000. It knows that in 1992 Belarus joined Russia and several other post-Soviet states in a Collective Security Treaty and in 2002 formed the Collective Security Treaty Organization with Russia and four other post-Soviet states. And it knows that in 2014 Belarus joined with Russia and Kazakhstan in forming the Eurasian Economic Union. In short, it knows that the recent developments in Belarus do not constitute an imminent change in the “spheres of influence” in Europe.

Nevertheless, the developments in Belarus are of great concern to Putin, as he made clear in several telephone conversations with EU leaders in the run-up to yesterday’s meeting, not because Belarus might, as a result, move toward, and perhaps someday join, the EU and even NATO—it won’t—but simply because they demonstrate the vulnerability of even the most powerful authoritarian, one armed with the full arsenal of repressive force, once that leader is no longer regarded by the citizens as legitimate. Putin, who has a long but at times difficult relationship with him, probably doesn’t care much whether Lukashenko stays in office or goes; in fact, the Russia-Belarus relationship might be better if he left. But he does care about what will happen in Russia in 2024, when he will run for another six-year term, and in 2030, when he presumably will run for yet another six-year term. Putin’s anxieties about Belarus today, and future elections in Russia, will no doubt be the focus of much discussion as Alexei Navalny fights for his life today in a hospital in Omsk.