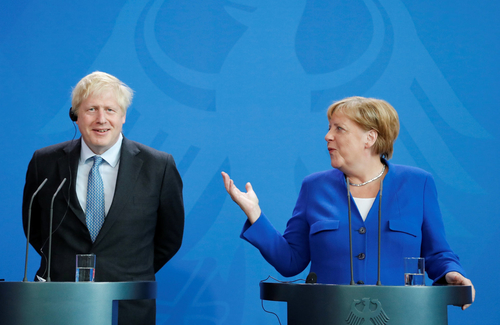 Last Monday, British Prime Minister Boris Johnson wrote to European Council President Donald Tusk, expressing his hope that the UK would leave the EU with a deal on Oct. 31 rather than without one, his objections to the Irish backstop, and his belief that, while the backstop must be dropped—something the EU adamantly rejects—an agreement is nevertheless possible. The backstop is, of course, the set of provisions in the 173-page Protocol on Ireland/Northern Ireland in the withdrawal agreement negotiated last year by the EU and UK that are designed to ensure the avoidance of a hard border between Northern Ireland and the Republic in all future circumstances.

The first step toward a solution to the backstop issue, Johnson said, is to ensure there is no return to a hard border when the UK leaves the EU. Toward that end, he said “this Government will not put in place infrastructure, checks, or controls at the border between Northern Ireland and Ireland. We would be happy to accept a legally binding commitment to this effect….” Noting that “the aim to find ‘flexible and creative’ solutions to the unique circumstances on the island of Ireland…means that alternative ways of managing the customs and regulatory differences contingent on Brexit must be explored,” and noting also that the UK and EU have already agreed that “alternative arrangements” can be part of the solution, he proposed that the backstop be replaced with “a commitment to put in place such arrangements as far as possible before the end of the transition period [i.e., before Dec. 31, 2020 or, with an extension, Dec. 31, 2021 or Dec. 31, 2022] as part of the future relationship.” And recognizing that there will need to be a degree of confidence about what would happen if these arrangements were not all fully in place at the end of that period, he said, “We are ready to look constructively and flexibly at what commitments might help, consistent of course with the principles set out in this letter.”

Last Monday evening, Johnson spoke by phone with Irish Taoiseach Leo Varadkar for almost an hour. According to the press releases issued by their offices, Johnson pointed out that the withdrawal agreement in its current form won’t be approved by the House of Commons, that the backstop would have to be removed, and an alternative solution was required. He also made it clear that the Common Travel Area between the two countries, which long predates the UK and Ireland joining the EU, would not be affected by the end of free movement after Brexit. Varadkar reiterated the EU27 position that the withdrawal agreement can’t be reopened and emphasized the importance of the legally operable guarantee to ensure no hard border and continued free trade on the island. Last Tuesday, Tusk responded to Johnson’s letter, saying, “The backstop is an insurance to avoid a hard border on the island of Ireland unless and until an alternative is found. Those against the backstop and not proposing realistic alternatives in fact support re-establishing a border. Even if they do not admit it.”

While most commentators interpreted what Varadkar and Tusk said as unambiguous rejections of Johnson’s proposal, both in fact sent an important signal that, while the withdrawal agreement itself can’t and won’t be reopened, it might nevertheless be possible to address the UK’s concerns about the backstop. Varadkar’s response made it clear that what would be required would be “a legally operable guarantee to ensure an open border and continued free trade on the island.” Likewise, Tusk’s criticism of those opposed to the backstop for “not proposing realistic alternatives” can be read as an implicit invitation to propose such alternatives.

Those signals were subsequently amplified, first by German Chancellor Angela Merkel after her meeting with Johnson last Wednesday, then by French President Emmanuel Macron after their meeting the next day, and then by Tusk after his meeting with Johnson on Sunday at the G7 meeting in Biarritz.

According to the official transcript of her comments after her meeting with Johnson, Merkel made it clear she was open to a solution that would ensure that the backstop would never take effect. In a widely-cited (and frequently misunderstood) passage, she said, “It has been said we can probably find [a solution] in the coming two years [i.e., in the negotiation of the future relationship that would take place during the transition period if the UK left the EU with a deal]. But maybe one can find it also in the next 30 days. Why not? Then we would have taken a whole step forward.” She made it clear that the backstop is simply a “place-holder” or “insurance policy;” if the border issue were resolved, “it would no longer be necessary.”

While Macron made it clear, prior to his meeting with Johnson, that the backstop is “indispensable,” after their meeting he said he was “very confident” the UK and EU would find “something intelligent in 30 days if there is goodwill on all sides.” “In the coming month,” he said, “we are not going to find a new withdrawal agreement that is very different from the existing one” – implying for the first time that there could indeed be a new agreement. And, he said, “If there are things in the framework of what was negotiated by Michel Barnier [the EU’s chief negotiator] that can be adapted and conform with the two objectives I mentioned – stability in Ireland and integrity of the single market – we should find it in the coming month.”

And in their meeting Sunday in Biarritz, Tusk told Johnson the EU is open to alternatives to the backstop, a dramatic reversal from the EU’s position, repeated innumerable times over the past several months, that the withdrawal agreement could not be renegotiated. But, Tusk said, any alternative would not only have to be, as he said last week, “realistic” but also “immediately operational.” They agreed they’d meet again in New York at the U.N. in September.

The Article 50 clock is ticking and time is running out; unless something very dramatic happens, in less than 70 days the UK will leave the EU without a deal in a Brexit that will have dire economic consequences for the British economy. But there is another option—a new agreement, one that could be included in a renegotiated Political Declaration on the Framework of the Future Relationship and reinforced by a Joint Interpretative Instrument, such as the one agreed by the EU and Canada in 2016, that would ensure that the border between Northern Ireland and the Republic remains open in all future circumstances and, in superseding the “backstop,” might make it possible for the UK to leave the EU with an approved withdrawal agreement on Oct. 31.

Can such an agreement be reached between now and Oct. 31? As Angela Merkel said, “Why not?”