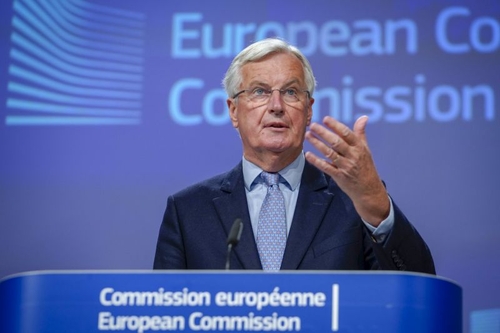 When the EU and UK concluded their fourth week-long round of negotiation of an agreement about their future relationship on June 5, it appeared the negotiation was stalemated. Michel Barnier, the EU’s chief negotiator, said, as he had after the earlier rounds, there was no substantial progress; indeed, he said, “there has been no substantial progress since the beginning of these negotiations.” David Frost, the UK’s chief negotiator, likewise said, “we made very little progress towards agreement on the most significant outstanding issues between us.” While the EU and UK disagreed about many issues, four stood out as especially difficult – the EU’s insistence on maintaining a “level playing field” in the standards that apply to EU and UK trade competitors, the UK’s insistence on being able to set annual quotas for EU fishing in its waters, governance of the future relationship and mechanisms for dispute resolution, and law enforcement and judicial cooperation.

Mindful of the fact that the UK had made it abundantly clear that it wouldn’t request by July 1, as the Withdrawal Agreement allowed, an extension of the current transition period and therefore will leave the EU’s Single Market and Customs Union, with or without an agreement, at midnight on Dec. 31, and mindful also that, taking into account the time needed for ratification so it could take effect on Jan. 1, 2021, an agreement would have to be reached by the end of October, Barnier and Frost agreed they would have to intensify and accelerate their work. Toward that end, on June 12 the Commission and the UK agreed to an addendum to the terms of reference for the negotiation that would “intensify the talks and create the most conducive conditions for concluding and ratifying a deal before the end of 2020.” On June 15, European Council President Charles Michel, European Commission President Ursula von der Leyen, European Parliament President David Sassoli and Prime Minister Boris Johnson, meeting in the High Level Conference called for in last October’s Political Declaration to take stock of progress in the negotiation, while welcoming the “constructive discussions” that had taken place, agreed that “new momentum was required” and supported the decision to intensify the talks.

The first of the added rounds, restricted to include only a limited number of experts on each side, took place last week. But although scheduled to run from Monday through Friday morning, the talks ended ahead of schedule Thursday morning with both chief negotiators noting that serious differences remain. Barnier said, “Our goal was to get negotiations successfully and quickly on a trajectory to reach an agreement. However, after four days of discussions, serious divergences remain.” Noting that the EU had listened carefully to Johnson’s statements in recent weeks, both about his desire to reach an agreement quickly and his red lines, and had engaged constructively in the negotiation, he made it clear, as he had after the earlier rounds, “there will be no economic

partnership without 1. robust guarantees for a level playing field – including on state aid – to ensure open and fair competition among our businesses; 2. a balanced, sustainable and long-term solution for our European fishermen and women; 3. an overarching institutional framework and effective dispute settlement mechanisms. And we will continue to insist on parallel progress on all areas.” In concluding, he said, “The EU expects…its positions to be better understood and respected in order to reach an agreement. We need an equivalent engagement by the United Kingdom.”

Frost, for his part, said, “Our talks were face to face for the first time since March and this has given extra depth and flexibility to our discussions. The negotiations have been comprehensive and useful. But they have also underlined the significant differences that still remain between us on a number of important issues.” In a radio interview Friday morning, Johnson said, “I’m a bit more optimistic than Michel is. There’s a good agreement to be reached.” And addressing Barnier’s last comment, he said, “I am not remotely disrespectful of Michel or the EU system, which I know well and understand deeply. I just don’t think that it’s right for us to proceed on the basis of the European Court of Justice continuing to arbitrate in the UK or us continuing to have to obey EU laws when we are out of the EU. Or us having to hand over our amazing fish stock.”

After the steady stream of “no progress” after each of the previous rounds in the negotiation and the comments about “serious divergences” and “significant differences” remaining after last week’s abruptly-abbreviated round, one might think the chances of an eventual agreement are low. But that would be wrong. The EU and UK both have a strong economic and political interest in reaching an agreement that would establish, as they agreed in last October’s Political Declaration, “an ambitious, broad, deep and flexible partnership across trade and economic cooperation with a comprehensive and balanced Free Trade Agreement at its core, law enforcement and criminal justice, foreign policy, security and defence and wider areas of cooperation.” And that mutual interest has only been deepened by the calamitous effects of the pandemic on both economies.

Obviously, there are differences – deep differences – over the EU’s desire to maintain a level playing field with the UK, the UK’s desire to control access to the fish in its territorial waters, and many other issues. But behind the scenes, progress is being made in finding the commonalities in the lengthy draft texts of an agreement both prepared – in the case of the EU, a 316-page text with 123 pages of annexes published in mid-March; in the case of the UK, a 292-page text with 114 pages of annexes published in mid-May. Eventually, with the intensified schedule of negotiation – a schedule that will no doubt be extended and, if need be, further intensified in September and October – the EU and UK will find their way to an agreement that will take effect on Jan. 1, 2021. But in the meantime, we’ll no doubt continue to hear more about the differences and divergences in their positions than about their common interest in an agreement. After all, it is a negotiation.