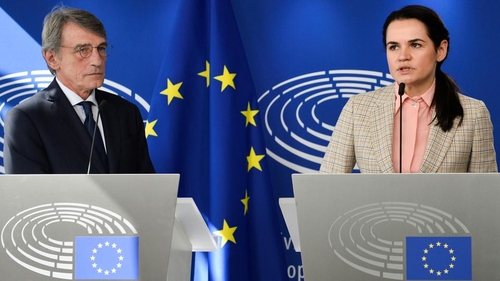 When they gathered in Brussels last Thursday for the two-day meeting of the European Council, the 27 leaders of the EU member states faced a full agenda—the dramatic increase in Covid-19 infections in several member states, the conflict between member states that regard themselves as friends of the rule of law and insist on adherence to the rule of law as a precondition for grants and loans under the EU’s €750 billion recovery plan and those which oppose such a precondition, the ongoing conflict between Armenia and Azerbaijan over Nagorno-Karabakh,  the EU’s increasingly complicated relationship with China, and what to do about the poisoning of Alexei Navalny in light of the fact that, given the substance involved, it had to have been authorized by the Russian government.

All of these were, and remain, challenging issues. But one of the most challenging issues facing the leaders was how to resolve the stalemate in the Council on Foreign Affairs over the imposition of sanctions on Belarus for the rigged reelection of Aleksandr Lukashenko on August 9 and the subsequent beatings and arrests of protesters who supported Lukashenko’s opponent, Svetlana Tikhanovskaya. The EU had raised the possibility of sanctions less than 48 hours after the Belarusian Central Election Commission announced the results, setting off days of protests. Yet here it was, more than seven weeks later, and the EU still had not acted, largely because one member state—Cyprus—insisted, as the quid for the quo of going along with the sanctions, that the EU impose sanctions on Turkey for its gas and oil exploration activities in the territorial waters of Cyprus.

On August 9, Lukashenko was elected to his sixth term as president of Belarus, a position he has held since 1994. According to the Central Election Commission, he received 80.1 percent of the vote and Tikhanovskaya, who entered the race after her husband Sergei, a dissident activist and blogger, was arrested in May after announcing his intention to run against Lukashenko, received 10.1 percent of the vote. When the preliminary results were announced that evening, there were widespread protests, to which the riot police and interior ministry forces responded with force and arrested more than 1,000 protesters.

Two days later, Josep Borrell Fontelles, the EU’s High Representative for Foreign Affairs & Security Policy and Commission Vice President in charge of external action, issued a Declaration on behalf of the EU: “During the electoral campaign, the people of Belarus have demonstrated the desire for democratic change. However, the elections were neither free nor fair…credible reports of domestic observers show that the electoral process did not meet the international standards expected of an OSCE participating State.” In regard to the violence and arrests, the Declaration said, “State authorities deployed disproportionate and unacceptable violence….Thousands of people were detained and the crackdown on freedoms of assembly, media and expression intensified…. It is against this background that we will be assessing the Belarusian authorities’ actions to address the current situation and conducting an in-depth review of the EU’s relations with Belarus. This may include, inter alia, taking measures against those responsible for the observed violence, unjustified arrests, and falsification of election results.”

The EU has imposed sanctions on Belarus on several occasions in the past. In 2004, it applied sanctions as a result of the disappearance of two opposition politicians and two other individuals in 1999 and 2000. In 2011, it applied sanctions on individuals who violated international electoral standards and human rights laws in a crackdown after the 2010 election on the democratic opposition and imposed an arms embargo on equipment that could be used for internal repression. In 2016, after Belarus had released a number of political prisoners, it lifted the sanctions on 170 individuals and four companies but retained the arms embargo and the asset freeze and travel ban on four individuals. In February, it continued those sanctions for another year.

As the protests and arrests continued, an extraordinary meeting of the EU’s Foreign Affairs Council, consisting of the foreign ministers, was called on August 14 to consider the situation. Speaking before the meeting, Heiko Maas, the German foreign minister—Germany holds the Council presidency in the second half of 2020—said, “As the EU, we want to significantly increase the pressure on Belarus today. The election result must be reviewed and those responsible for mistreatments of peaceful demonstrators must be sanctioned.” The ministers called upon Belarus to stop the “disproportionate and unacceptable” violence against the protesters and release immediately all those unlawfully detained. Reiterating that “the elections were neither free nor fair,” they said, “the EU considers the results to have been falsified and therefore does not accept the results of the election as presented by the Belarus Central Election Commission.” The ministers “agreed on the need to sanction those responsible for violence, repression and the falsification of election results” and said the work on additional listings within the existing sanctions framework for Belarus would start immediately.

On August 19, in response to a call from Charles Michel, the President of the European Council, the 27 EU leaders met in a videoconference to consider the situation. The leaders reiterated what the foreign ministers had said—that the presidential elections “were neither free nor fair, therefore we do not recognise the results” and expressed their “clear solidarity with the people of Belarus in their desire to exercise their fundamental democratic rights.” Condemning the “disproportionate and unacceptable violence displayed by the state authorities against peaceful protesters,” they announced that, in accord with the foreign ministers’ decision, the EU would shortly impose sanctions against “a substantial number of individuals responsible for violence, repression and the falsification of election results.”

But sanctions, it turns out, are sometimes more easily agreed in principle than imposed in fact. An informal meeting of the EU foreign ministers took place in Berlin on August 27-28 at which they discussed the Belarus situation. Such meetings, which occur semi-annually and are called Gymnich after the location of the first such meeting, cannot take formal decisions. However, it became apparent in the discussion that it might be difficult for the ministers to formally agree to impose sanctions on Belarus at their next meeting in September; such decisions require unanimity and it was apparent that Cyprus was prepared to veto a decision to impose sanctions unless the EU simultaneously agreed to sanction Turkey for its exploration for underwater oil and gas fields with drilling ships protected by Turkish air and naval forces in Cypriot waters.

And indeed, when the Foreign Affairs Council met in Brussels on September 21, Cyprus refused to agree to authorize sanctions on 40 members of the Belarus government unless the EU also agreed to impose sanctions on or otherwise punish Turkey for the exploration activities and presence of its military forces within Cypriot waters. The ministers “noted the determination and perseverance of the people of Belarus, in spite of the repression, expressed strong solidarity with them in their democratic aspirations, and called for new, free and fair elections under OSCE supervision.” And they noted they had discussed the issue of sanctions and had “restated the political will to adopt new restrictive measures as soon as possible.” But notwithstanding Tikhanovskaya’s presence at the EU that day, Cyprus held out and said no—not without sanctions on Turkey for the presence of its drilling ships and military vessels in its territorial waters. Following the meeting, the German presidency arranged for talks between Turkey, Cyprus and Greece and NATO arranged for “deconfliction” talks between Turkey and Greece. (Cyprus isn’t a member of NATO.)

While the EU, saddled with its unanimity rule, was unable to move forward with the sanctions, others took the lead. On August 31, Estonia, Latvia, and Lithuania, where Tikhanovskaya and other leaders of the Belarusian opposition had found refuge after the election, imposed travel bans on 30 Belarus officials, including Lukashenko, who they believed were responsible for the fraudulent vote and subsequent violence. And last Tuesday, the UK and Canada, working together, imposed sanctions including an asset freeze and travel ban on Lukashenko, his son Viktor, and six high-level officials including the head of the presidential administration, the minister and two deputy ministers of internal affairs, the commander of the internal affairs troops, and the commander of the special purpose police.

After eight hours of discussion that began on Thursday and continued into the early hours of Friday, the European Council finally persuaded Cyprus to go along with the sanctions. In their Conclusions released after the meeting, the leaders, speaking collectively, said, “The European Council reiterates its full solidarity with Greece and Cyprus, whose sovereignty and sovereign rights must be respected.” While welcoming the recent confidence-building steps taken by Greece and Turkey, as well as the announcement that they will resume their exploratory talks aimed at delimiting the Continental Shelf and Exclusive Economic Zones of the two countries, “the European Council strongly condemns violations of the sovereign rights of the Republic of Cyprus which must stop…., calls on Turkey to abstain from similar actions in the future, in breach of international law…, underlines that delimitation of the Continental Shelf and Exclusive Economic Zone should be addressed through dialogue and negotiation in good faith, in full respect of international law, and calls on Turkey to accept the invitation by Cyprus to engage in dialogue with the objective of settling all maritime-related disputes between Turkey and Cyprus.”

Perhaps more importantly, in terms of influencing Turkey’s conduct in the Eastern Mediterranean, the leaders also agreed, on one hand, that “provided constructive efforts to stop illegal activities vis-à-vis Greece and Cyprus are sustained, the European Council has agreed to launch a positive political EU-Turkey agenda with a specific emphasis on the modernisation of the Customs Union and trade facilitation, people to people contacts, High level dialogues, continued cooperation on migration issues, in  line with the 2016 Eu-Turkey Statement. The European Council invites its President, in cooperation with the President of the Commission and with the support of the High Representative, to develop a proposal for re-energising the EU-Turkey agenda.”

With that assurance in mind, Cyprus approved the sanctions against Belarus and, later Friday morning, the Council on Foreign Affairs unanimously approved sanctions against 40 Belarusian officials, including the minister of internal affairs, the first deputy minister, three deputy ministers, the commanders of the internal affairs troops, special rapid response forces, a number of regional and city police commanders, the leaders of the Belarus KGB, and 12 members of the Central Election Committee. The sanctions consist of an asset freeze on funds or economic resources in any EU member state and a travel ban preventing entry into the EU. Later on Friday, the U.S. Secretary of the Treasury Steven Mnuchin announced the U.S. was also imposing sanctions on eight Belarusian officials.