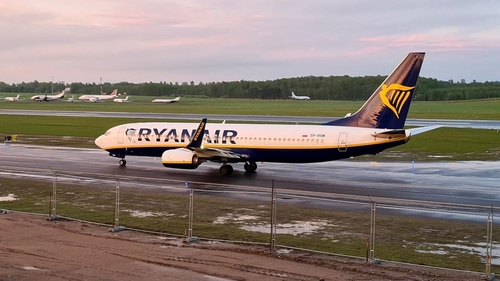 The European Union is not noted for acting promptly and decisively when confronted with a serious geopolitical challenge. But on Monday, only a day after Belarus, claiming to have received information there was a bomb on board, instructed a Ryanair 737 on a flight from Athens to Vilnius with 126 passengers to divert from its course only a few miles from Lithuania and, escorted by a MiG-29 fighter jet, land in Minsk, the heads of state or government of the EU, meeting as the European Council, responded quickly and decisively.

Having been previously convened by European Council President Charles Michel for a special two-day meeting at which the leaders would hold a “strategic debate” on Russia and its “illegal and provocative steps…both within EU member states and beyond,” and would discuss as well relations with the UK following the entry into force of the EU-UK Trade and Cooperation Agreement on May 1, recent events in the Middle East, and the EU’s response to the Covid pandemic and to climate change, the agenda was preempted by Sunday’s forced landing and detention of two passengers—Raman Pratasevich, 26, a Belarusian activist and media editor who has been living in Vilnius the last two years, and a friend—before the flight went on to Vilnius.

In a communiqué issued Sunday evening, Michel said, “I condemn in the strongest possible terms the forced landing of a Ryanair flight in Minsk…and the reported detention by Belarusian authorities of journalist Raman Pratasevich. I call on Belarus authorities to immediately release the detained passenger and to fully guarantee his rights. EU leaders will discuss this unprecedented incident tomorrow during the European Council. The incident will not remain without consequences.” And in a Declaration issued Monday morning, Josep Borrell Fontelles, the EU’s High Representative for Foreign Affairs & Security Policy and Commission Vice President in charge of external action, called the forced diversion and landing “an inadmissible step” and the detention of Pratasevich “yet another blatant attempt by the Belarusian authorities to silence all opposition voices.” He called for his immediate release and, noting that the “coercive act” had jeopardized the safety of passengers and crew, called as well for an international investigation. He said, “this situation will be raised at the upcoming meeting of the European Council. The EU will consider the consequences of this action, including taking measures against those responsible.”

Last August, Belarus President Aleksandr Lukashenko, who a German foreign minister once famously called “Europe’s last dictator,” was elected to his sixth consecutive term in an election the EU concluded was neither free nor fair, in which the results were falsified, and after which the regime responded to protests with extensive violence and mass detentions. After resolving some disagreements among the member states about how to respond, in early October the EU foreign ministers, meeting as the Council on Foreign Affairs, unanimously approved sanctions against 40 Belarusian officials, including the minister of internal affairs, the first deputy minister, three deputy ministers, the commanders of the internal affairs troops and special rapid response forces, a number of regional and city police commanders, the leaders of the Belarus KGB—Belarus is the only former republic of the U.S.S.R. that retains the name and initials of the Soviet-era Committee on State Security—and 12 members of the Central Election Committee. In November, the EU approved sanctions on 15 more individuals, including Lukashenko and his son Viktor, the National Security Adviser. The sanctions consisted of asset freezes on funds or economic resources in any EU member state and travel bans preventing entry into the EU.

It took much less time Monday than it took last fall for the 27 member states to agree unanimously on how to respond to Sunday’s forced landing and the detention of Pratasevich. Issuing its conclusions on Belarus Monday evening, the European Council said it “strongly condemns the forced landing…and the detention by Belarusian authorities of journalist Raman Pratasevich and Sofia Sapega.” It demanded their immediate release and that their freedom of movement be guaranteed; called on the International Civil Aviation Organization to “urgently investigate this unprecedented and unacceptable incident;” invited the Council [on Foreign Affairs] “to adopt further targeted economic sanctions” and invited Borrell and the Commission to submit proposals without delay to this end; called on all EU-based carriers to avoid overflight of Belarus; and called on the Council to adopt the necessary measures to ban overflight of EU airspace by Belarusian airlines and prevent access to EU airports of flights operated by such airlines. For good measure, the leaders also said they stand in solidarity with Latvia following the expulsion of its diplomats in Belarus after the mayor of Riga replaced the Belarus flag with the red-and-white national flag of those opposed to Lukashenko at the world hockey championships now taking place in Latvia.

While Belarus was the first order of business, it was only one of several important topics on the European Council’s agenda at its meeting. One of the most important, given the recent imprisonment of Alexei Navalny, the concentration of Russian troops near the border with Ukraine this spring, the recent diplomatic crisis between the Czech Republic and Russia, and of course the latter’s close relationship with Belarus, was the EU’s relationship with Russia. In their conclusions for the meeting, the leaders said they held a strategic debate on Russia, condemned the “illegal, provocative and disruptive Russian activities against the EU, its Member States and beyond,” and reaffirmed “the EU’s unity and solidarity in the face of such acts as well as its support to Eastern partners.” They also expressed their solidarity with and support for the Czech Republic, which (with the U.S.) was officially declared by Russia last week to be an “unfriendly state” after the Czech government accused Russian military intelligence operatives of having blown up a large ammunition dump in 2014 and the two governments subsequently expelled most of the other’s diplomats. The leaders invited Borrell and the Commission to present a report with policy options on EU-Russia relations for their next meeting in June.

It might make sense for the leaders to also invite Borrell and the Commission to present a report at the June meeting with policy options in regard to the EU-Belarus relationship. Last October, soon after imposing the sanctions prompted by the rigged presidential election and post-election crackdown on protesters, the EU’s Foreign Affairs Council announced it had decided to review the EU’s relations with Belarus. It said that, among other things, the EU would scale down bilateral cooperation with Belarusian authorities while increasing support for the Belarusian people and civil society; recalibrate its financial assistance so that it benefits the population at large by directing it to the maximum extent possible away from central authorities and toward non-state, local  and regional actors; continue engagement with Belarus on issues of interest to the EU and the Belarusian society; and, within the Eastern Partnership framework, maintain cooperation with Belarus at the non-political level and intensify cooperation with key non-state Belarusian stakeholders. But the sanctions themselves had no discernible effect on the Lukashenko regime, and there’s no reason to think that whatever sanctions are levied for the forced landing and detainment of Pratasevich will have any effect either. Perhaps the time has come for the EU to consider whether Belarus under Lukashenko deserves to be regarded and treated as an “Eastern Partner.”