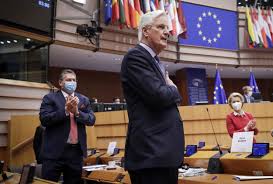 Almost five years after British voters chose, by a narrow 52-48 margin in the June 23, 2016 referendum, to leave the EU, Brexit finally is a done deal. On Tuesday evening, the European Parliament approved by an overwhelming margin—660 in favor vs. 5 against and 32 abstentions—the 1276-page EU-UK Trade and Cooperation Agreement. The TCA, which was approved in late December and provisionally applied, pending European Parliament approval, from January 1 through February and, in late February, through April, will take effect tomorrow.

In their 2019 Withdrawal Agreement, the UK and EU agreed the UK would leave the EU on January 31, 2020 but would remain, during a transition period until the end of 2020, in the EU’s single market and customs union. The Withdrawal Agreement provided for the UK to request an extension of the transition period for one or two years but the British government made it clear last year that it wouldn’t request an extension—which meant it would leave the EU’s single market and customs union, with or without an agreement in regard to their future relationship, at midnight on December 31, 2020. Leaving without an agreement would mean the “hardest” possible Brexit; the UK would face tariffs, quotas and a variety of other limitations on its trade with the 27 EU member states and that trade would be conducted under WTO rules, like any state that has no trade or commercial agreement with the EU.

The negotiation of the future relationship began last March and involved large teams headed by the two chief negotiators—Michel Barnier for the EU and Lord David Frost for the UK. While the negotiation made progress behind the scenes on a number of issues, the negotiators consistently highlighted the lack of progress in regard to three especially difficult issues—how to maintain a “level playing field” for British and EU businesses competing against each other in the UK and EU markets, how to allocate the right to fish and the amount of fish that could be taken in British territorial waters between EU and British fishermen and women, and how to enforce the terms of the overall trade agreement and resolve the disputes that might arise.

As difficult as it was to make progress on those and other issues during much of 2020, with time  running out for reaching an agreement that would allow the UK to avoid a “hard” Brexit at midnight on December 31, the EU and UK negotiators, assisted by a series of phone calls at critical moments between European Commission President Ursula von der Leyen and British Prime Minister Boris Johnson, succeeded in concluding an agreement on December 23. The British Cabinet approved the agreement late that evening and the next morning von der Leyen and Johnson announced the agreement. The EU member states’ ambassadors, assisted by Barnier, reviewed the agreement on December 25 and on December 28, after receiving instructions from their governments, unanimously approved the TCA and agreed to its provisional application as of January 1 through February 28, pending the European Parliament’s approval. The British Parliament was recalled on December 30 to consider and vote on the government’s European Union (Future Relationship) Bill. After all of the stages in the legislative process were completed and the Bill was approved by the House of Commons on December 30,  Johnson signed the  TCA, which had been flown from Brussels after having been signed that morning by von der Leyen and European Council President Charles Michel. That evening the government’s Bill was approved without opposition by the House of Lords and received the Queen’s assent and became law.

With the European Parliament’s formal approval of the TCA, Brexit is indeed a done deal. And it obviously is an important one. It provides for trade between the UK and the EU in goods without tariffs and quotas and also provides the basis for a broad economic, social and environmental partnership between them as well as a new partnership for citizens’ security and a common governance framework. Having the relationship elaborated in the TCA is clearly better, much better, for both the UK and the EU than not having one. Nevertheless, there are, at least for the UK, some important shortcomings in the TCA, notwithstanding the obvious benefits. Perhaps the most important one is that it does very little for the largest sector of the British economy—services, which account for more than 70 percent of the country’s GDP and, in contrast to the UK’s large deficit in its trade in goods with the EU, produces a substantial surplus—£18 billion in 2019. Financial services alone produced a surplus of more than £20 billion in 2019 while other business services produced a surplus of £14 billion.

Given both the relative importance of services in the British economy and the fact that its trade with the EU in services—especially in financial and other business services—produces a surplus, one might have thought that, in negotiating the TCA, the UK would have focused on enhancing its trade with the EU in services. Yet that didn’t happen; it spent far more time and effort in resisting EU demands in regard to fishing—notwithstanding the fact that fishing accounts for less than 0.5 percent of the UK GDP—than in negotiating provisions that would benefit the largest sector of its economy. Indeed, the TCA not only does little to promote British trade in services with the EU but, because of new regulations pertaining to professional qualifications and short-term business travel, coupled with the end of free movement, those selling services in the EU now face new regulatory obstacles. And it doesn’t provide an arrangement through which a British provider of a financial service can obtain certification that it satisfies the EU’s criteria for regulatory “equivalence” in regard to provision of the service. As a result, the only way British providers of such services can operate in the EU is by satisfying those criteria—meaning they are judged to adhere to EU regulations. It’s not surprising, of course, that the EU resisted agreeing to the inclusion of provisions that would benefit British providers of financial services, given the UK’s substantial surplus with the EU in such services. But it is surprising the UK didn’t push harder to get better treatment for its providers of financial services; after all, the EU does very well, and will continue to do very well, in its trade with the UK in goods, including, most notably, motor vehicles, in which the EU  enjoyed a £30 billion surplus in 2019.

Instead, attention was focused in the last days and weeks of the negotiation on a segment of the economy—fishing—that, as noted above, accounts for less than one percent of the UK GDP. But as with services, the terms of the TCA suggest the EU got the better of the deal in regard to fishing. The UK did get, after a longer-than-desired 5½-year “adjustment period,” EU agreement to annual, rather than multi-year, negotiations to allocate shares of the catch in UK waters. But it agreed to an increase of only 25 per cent in its share of the annual value of the EU catch in UK waters over the “adjustment period,” far less than the 60 to 80 percent “repatriation” it had insisted upon earlier in the negotiation. It also accepted continued access for EU fishermen and women to British coastal waters within 6-12 nautical miles of the shore rather than their complete exclusion, as it had demanded at earlier stages in the negotiation. And as the Scottish government noted in its analysis of the fishing agreement, the UK obtained an increase in the quota for UK fishermen and women in only five of the 13 fishing areas around and near Scotland while accepting no increase in two of the areas and reductions in six of the areas, including reductions in the Scottish catch of North Sea cod and haddock.

There can be no doubt that, after having decided to leave the EU and then to leave the EU’s single market and customs union at midnight on December 31, the UK is much better off with the TCA than without it. But there is still much work to be done—most notably, in negotiating a financial services agreement.