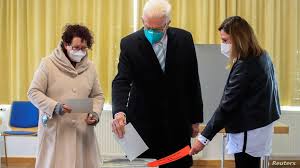 On Sunday, voters in Baden-Württemberg and Rhineland-Palatinate in western Germany went to the polls to elect their Landtag, the state assembly. With the Christian Democratic Union (CDU) and its Bavarian sister party, the CSU, facing in September their first national election in almost 20 years in which Angela Merkel won’t be the CDU-CSU chancellor candidate, with her government under fire for the delays in obtaining and distributing the Covid vaccine, and with last week’s scandal involving several CDU and CSU Bundestag members who benefitted from deals involving contracts for face masks and were obliged to resign, attention was inevitably focused on how well the CDU would do in the two states.

But unlike what had happened in a number of previous state elections, especially in eastern Germany, the CDU losses didn’t reflect the defection of substantial numbers of previous CDU voters to the xenophobic, euroskeptic, radical-right and populist Alternative for Germany (AfD). In fact, while the CDU suffered losses in both states, the big loser in both states was the AfD. In Baden-Württemberg, its share of the party vote dropped by more than 35 percent, from 15.1 percent in 2016 to 9.7 percent. And in Rhineland-Palatinate, the AfD’s share of the vote dropped by more than 34 percent, from 12.6 percent in 2016 to 8.3 percent. To what extent, if at all, those losses occurred because the Federal Office for the Protection of the Constitution (BfV), Germany’s domestic intelligence agency, placed the AfD “under observation” for extremism last week is not known. But whatever the reason, the substantial losses suffered by the AfD were good news for most Germans.

One might assume that if the center-right CDU and radical-right AfD both lost support in Sunday’s elections, the left parties did well. Unfortunately for the SPD, which hopes to not only remain in the government after the September election but win the chancellor’s office for the first time since 2002, that didn’t happen. In Baden-Württemberg, the SPD, which won 12.7 percent of the vote in 2016, won only 11 percent on Sunday. It did better in Rhineland-Palatinate, where its leader, Malu Dreyer, serves as Minister-President and heads an SPD-FDP-Greens government, and where it won 35.7 percent, only 0.5 percent less than it won in 2016. Still, with the vote shares of the CDU and AfD dropping by more than 8 percent, one would have expected its share of the party vote to increase by more than 0.5 percent.

In contrast to the losses suffered by the CDU and AfD, and the slight setbacks experienced by the SPD, the big winner in both states—to the extent there was one—was the Greens. In Baden-Württemberg, where the Greens leader, Winfried Kretschmann, the only Green to head a government in Germany, has been Minister-President since 2011 and currently leads a coalition government with the CDU, the Greens won 32.6 per cent of the vote, an increase of 2.3 percent over the party’s vote in 2016. And in Rhineland-Palatinate, where the Greens are part of Dreyer’s “traffic light” coalition, the Greens’ share of the party list vote increased from 5.3 percent in 2016 to 9.3 percent.

The Free Democrats (FDP) also did quite well in Baden-Württemberg, winning 10.5 percent of the party vote compared with 8.3 percent five years ago. But in Rhineland-Palatinate, the FDP’s vote dropped off slightly, from 6.2 percent in 2016 to 5.5 percent on Sunday. Interestingly, and perhaps evidence that some voters are tiring of having to choose among the same partisan alternatives—or perhaps tiring of parties in general, the Free Voters (Freie Wahler), involving associations of independent voters which usually just get a handful of votes, did well in both states—increasing from 0.1 percent to 3 percent of the list vote in Baden-Württemberg and from 2.2 percent to 5.4 percent in Rhineland-Palatinate.

There is only one more state election, in Saxony-Anhalt in eastern Germany, prior to the federal election on September 26. As in most of the eastern states, the AfD has done very well there, getting 24.3 percent of the party vote in the 2016 state election and 19.6 percent in the 2017 federal election, compared with 29.8 and 30.3 percent for the CDU, 10.6 and 15.2 percent for the SPD, and 5.2 and 3.7 percent for the Greens in those elections. Saxony-Anhalt is hardly a bellwether of what may happen in September. But the state election there in early June may nevertheless provide some indication of whether the losses suffered by the AfD and CDU, and the gains won by the Greens, in Baden-Württemberg and Rhineland-Palatinate on Sunday are likely to be repeated in the national election on September 26.

The results of Sunday’s elections will inevitably fuel speculation about various alternative coalitions at the federal level after the September election, including both an SPD-FDP-Greens “traffic light” coalition and a CDU-Greens coalition with or without the FDP. Either way, the Greens—the big winner in Sunday’s elections—will figure prominently in the speculation. In the meantime, the first order of business for the CDU and its Bavarian sister party, the CSU, will be to decide who will be their chancellor candidate in September. In January, the CDU elected Armin Laschet, who has led the CDU in North Rhine-Westphalia since 2012 and has headed a CDU-FDP coalition government since 2017, as the party’s leader. The CDU leader is usually the CDU-CSU chancellor candidate. Indeed, the parties have chosen the CSU leader as the Union’s chancellor candidate in only two of the 19 federal elections—in 1980, when Franz Josef Strauss was the candidate, and in 2002, when Edmund Stoiber was the candidate—and in both elections the CDU-CSU lost to the SPD and its coalition partners.

Nevertheless, there are many in the CSU, and a good number in the CDU as well, who believe, especially after the CDU’s dismal performance in recent state elections, that Markus Söder, the CSU leader and minister president of Bavaria, would be a stronger chancellor candidate than Laschet. Söder has served as the state’s minister of federal and European affairs, minister of health and the environment, and, for seven years until becoming minister president in 2018, minister of finance, regional development and home affairs. Over that period, he has been a forceful critic of the federal government’s response to the eurozone debt crisis, the migration crisis and, most recently, the Covid pandemic, and he has strongly criticized as well the EU – most recently, for its substantial delays in ordering, obtaining, and distributing the Covid vaccines. From a strategic perspective, he would probably be much more effective than Laschet in bringing back to the CDU those who have defected in recent elections to the AfD. And he would be probably also be more successful than Laschet in persuading the Greens to join a CDU-CSU government, given Laschet’s policies supporting continued coal production in North Rhine Westphalia. On the other hand, Söder has been the leader of the CSU for only a couple of years and the minister president of Bavaria for only three years and he may decide that the best place for him for the time being is where he is now; as he has often said, “My place is in Bavaria.”