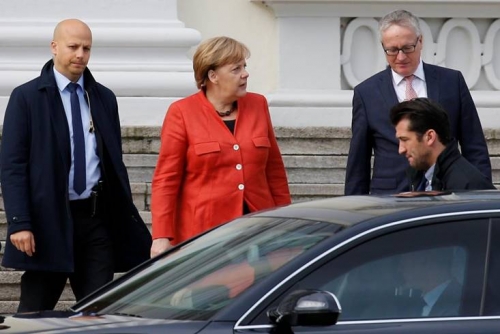 At a time when Europe faces a host of challenges, ranging from the bogged-down Brexit negotiations between the United Kingdom and the European Union to the evident need to reform the design and operation of Economic and Monetary Union to the growing appeal of xenophobic and eurosceptic populist parties, a wave of anxiety spread across the continent Monday after negotiations to form a new government in Germany broke down and raised the prospect of either continued negotiation, formation of a minority government, new elections, or all three, and a Germany incapable of providing the stability and leadership its neighbors need in troubled times.

On Sunday evening, after a month of intensive negotiations between the Christian Democratic Party/Christian Social Union (CDU/CSU) bloc, the liberal pro-business Free Democratic Party (FDP), and the left-leaning Greens to form a new government, the FDP announced it was pulling out of the negotiations. In announcing the walk-out, Christian Lindner, the FDP leader, told reporters the parties had “no common vision” for modernizing the country and “no common basis of trust.”

The negotiations followed the September 24 election in which both the CDU/CSU and the Social Democratic Party (SPD), which governed in a “grand coalition,” suffered substantial losses. The vote for Chancellor Angela Merkel’s CDU dropped from 34.1 percent of the party list vote to 26.8 percent, that of the Bavarian-based CSU dropped from 7.4 percent to 6.2 percent, and that of the SPD dropped from 25.7 percent to 20.5 percent. The combined vote for the CDU/CSU was the lowest since the first election in 1949; that for the SPD was the lowest in any election since World War II. The CDU/CSU won 246 seats in the Bundestag and the SPD won 153 seats – still enough for a majority in the 709-seat Bundestag. But the SPD made it clear as the magnitude of its defeat became apparent in the evening of September 24 that it would not form another “grand coalition” and would, instead, take a “cure of opposition.”

The far-left Linke and far-right AfD were beyond the pale for consideration as potential partners of the CDU/CSU in a new coalition, and neither the Greens, with 67 seats, nor the FDP, with 80 seats, had enough seats alone to form a majority with the CDU/CSU. With the SPD committed to its hoped-for “cure of opposition,” the only possible majority was a four-party coalition of the CDU/CSU, FDP and Greens. Hence the negotiations that began four weeks ago. What makes coalition negotiations in Germany especially difficult, of course, is that the terms of any agreement are recorded in a document, the Koalitionsvertrag, literally a coalition contract, approved by each party and signed by each party leader.

The parties were separated at the outset on several key issues – most notably, immigration, climate change and taxation. Although generally regarded as a bloc, the CDU and CSU were themselves divided over immigration. The CSU, in control of the state that was, because of its location, the front line for much of the immigration of more than 1.2 million that occurred in 2015-16, insisted before the four-party talks began that the CDU agree to restrict immigration to 200,000 per year and continue the suspension introduced last year of the right of migrants having “subsidiary protection” to bring their spouses and children to Germany even if they aren’t employed and don’t have adequate housing for the family. That suspension is due to be lifted next year. The Greens strongly opposed the CDU/CSU position but late last week agreed to accept the CDU/CSU annual limit of 200,000 immigrants provided the right of family reunification is restored for migrants with “subsidiary protection.”

On climate change, the Greens called for a reduction of 8-10 gigawatts in coal-generated power, a major source of carbon dioxide in the atmosphere. The other parties resisted that reduction on the grounds that it would reduce employment in the energy sector and hurt the companies producing and making use of coal-generated power. On taxation, the FDP insisted that the 5.5 percent “solidarity tax” on personal and corporate incomes and capital gains introduced in 1991 to support the economic development of the states of the former GDR be terminated.

In the wake of the FDP’s decision to pull out of the negotiations, it’s not clear how and when a new government will be formed. One alternative, of course, is continuation of the CDU/CSU-SPD “grand coalition.” But on Monday, Martin Schulz, the SPD leader, reiterated his party’s rejection of that option; he said it’s “not available.” Another alternative is formation of a minority government by the CDU/CSU and the Greens – provided, of course, they can resolve their differences over the migrant family reunification issue. But that would mean the government would have to rely for passage of any legislation on the votes of members of parties not in the government – votes which might or might not be forthcoming. A third alternative is a new election. But under the German constitution, the Bundestag can only be dissolved and a new election called by President Frank-Walter Steinmeier at this point if a new chancellor is appointed without a majority or loses a vote of confidence. And although Merkel said she would prefer a new election to leading a minority government, a new election would, of course, provide the AfD with an opportunity to make even further inroads into the CDU/CSU electorate.

On Monday, Merkel met with Steinmeier, after which he called upon the parties to return to the negotiations and made it clear that he saw no reason at this point to call a new election: “I expect the parties to make the formation of a new government possible in the foreseeable future,” he said: “The responsibilities given to the parties remain. One can’t just return that responsibility to the voters.” By the end of the day, it seemed clear the negotiations will resume next week, with or without the FDP. But whether they will produce a government with a majority or, failing that, a minority government or new elections in early 2018 remains to be seen.  And Europe remains anxious.

David R. Cameron is a professor of political science and the director of the Program in European Union Studies at the MacMillan Center.