German parties negotiate a coalition agreement. But will the SPD members say yes? 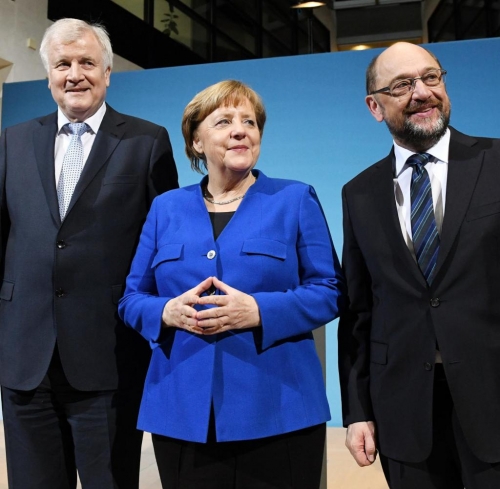 Updated on February 14 at 2pm.

Last Wednesday, more than four months after the Sept. 24, 2017 election, after a failed attempt by Angela Merkel’s Christian Democratic Union and its Bavarian sister party the Christian Social Union to negotiate a coalition agreement with the Free Democrats and the Greens, and then a protracted negotiation between the CDU-CSU and the Social Democratic Party (SPD), the CDU-CSU and SPD agreed to continue their “grand coalition” government for another four years.

In addition to agreeing on the policies the new government will pursue, described in detail in the 177-page coalition agreement, the parties agreed on the allocation of positions in the government. Merkel will, of course, remain chancellor, the position she has held since 2005. But the big winner, in terms of cabinet positions, is the SPD. It will retain the position of foreign minister now occupied by Sigmar Gabriel, the vice chancellor and former minister of economic affairs who stepped aside as party leader for Martin Schulz last March and replaced Frank-Walter Steinmeier as foreign minister after Steinmeier was elected president. And importantly, Olaf Scholz, the SPD mayor of Hamburg, will replace Wolfgang Schäuble of the CDU, who became finance minister in 2009 and played a major role in orchestrating the European Union’s response to the eurozone debt crisis and, more generally, in defining and implementing German economic policy until last October, when he was elected president of the Bundestag.

But while the parties have agreed to form a coalition and have already allocated the ministries, there is still one last step to be taken before the government takes office: Following the SPD’s internal rules, its 460,000 members must now approve the agreement in a postal vote. Given the narrow margin of support for a 28-page preliminary coalition agreement at a one-day SPD party conference on Jan. 21 – only 56 per cent of the delegates approved it and agreed to continue the negotiations – and the strong opposition to both the preliminary and the final agreement voiced by the Young Socialists (Jusos), their leader Kevin Kühnert, and others on the left of the party, it’s far from certain that a majority of the membership will approve the agreement.

The ambivalence within the SPD about renewing its coalition with the CDU-CSU is, of course, related to the party’s performance in the election. Its share of the party list vote dropped from 25.7 per cent in 2013 to 20.5 per cent – its lowest vote in any election since World War II. The SPD was not the only loser in the election; the CDU’s share of the party list vote dropped even more, from 34.1 per cent to 26.8 per cent, and the Bavarian-based CSU’s share dropped from 7.4 per cent to 6.2 per cent. But for many in the SPD, the lesson of the election was clear: Participation in a “grand coalition” with the CDU-CSU is a recipe for electoral disaster; it inevitably implicates the SPD in the policies pursued by a government headed by Merkel and dominated by the CDU-CSU and makes it impossible for the party to credibly express its opposition to those policies and enact the policies it prefers.

Despite their losses, the CDU-CSU with 246 seats and the SPD with 153 seats still came out of the election with a narrow majority in the 709-seat Bundestag, enough to continue the “grand coalition” that had governed Germany since 2013. But as the results became known in the evening of Sept. 24, Schulz spoke for many in the party when he said it was a “bitter hour in the history of Social Democracy” and announced the SPD would end its coalition with the CDU and CSU and form the opposition in the Bundestag to whatever government Merkel might put together. It was an especially bitter hour, of course, because many in the SPD had assumed that, with Schulz as candidate for chancellor, the party would improve upon its dismal 2013 vote. And indeed, for a few months in the winter and spring of 2017, after Schulz returned from Brussels where he had been the president of the European Parliament, it appeared that would happen; support in the polls for the party increased dramatically from roughly 20 per cent in January 2017 to more than 30 per cent in March and April. But as the novelty of a Schulz candidacy wore off, so too support for the SPD slowly receded throughout the summer toward the 20 per cent it obtained on Sept. 24.

After Schulz closed the door on renewal of the “grand coalition,” Merkel turned her attention to negotiating a so-called “Jamaica” coalition, named for the colors of the Jamaican flag and the German parties – black (CDU-CSU), yellow (the Free Democrats, the FDP), and green (the Greens). But in November, after a month of intensive negotiations between the four parties, the FDP pulled out of the negotiations, claiming the parties had “no common vision” for modernizing the country and “no common basis of trust.”

In the wake of the FDP decision, Schulz reiterated the SPD’s opposition to forming another “grand coalition” with the CDU-CSU, saying that option was “not available” and confronting Merkel with an unpalatable choice between attempting to govern without a parliamentary majority or asking the president to call new elections. The latter, of course, would provide the far-right, xenophobic and euroskeptic Alternative for Germany (AfD), which obtained 12.6 per cent of the party list vote in September, an opportunity to make further inroads into the CDU and CSU electorates. President Steinmeier made it clear that he saw no reason to call a new election and in meetings with the party leaders including Schulz urged them to continue negotiations: “I expect the parties to make the formation of a new government possible in the foreseeable future…. The responsibilities given to the parties remain. One can’t just return that responsibility to the voters.”

In early December, a party conference of the SPD voted to conduct preliminary negotiations with the CDU-CSU with an eye to possibly forming another “grand coalition.” Those negotiations, completed in January, resulted in the 28-page agreement that was approved by 56 per cent of the delegates at another SPD party conference and resulted in the continuation of negotiations which ultimately produced the formal agreement announced last Wednesday. But it was clear from the narrow majority that the party was deeply divided over the prospect of participating in another “grand coalition.”

The SPD drove a hard bargain in the subsequent negotiations and most observers would say it “won” in the negotiation – not only because it will, if its members approve the agreement, control both the foreign ministry and the powerful finance ministry headed for the past nine years by Wolfgang Schäuble, but also because it won a number of important concessions in domestic and European policy. For example, the parties agreed to increase government spending on pensions, education, health, public services, infrastructure, and financial support for the EU. And in regard to Europe, the subject of the first chapter of the coalition agreement, the parties committed themselves to reforming the euro area by transforming the European Stability Mechanism into a European Monetary Fund, creating an investment budget for the euro area, and developing the capacity to conduct a countercyclical fiscal policy within the area.

Nevertheless, there are still many in the SPD who continue to oppose participating with the CDU and CSU in another “grand coalition” and would prefer a lengthy “cure of opposition.” And many of those who objected to Schulz’s decision to reverse his earlier opposition to renewing the “grand coalition” and subsequently opposed and nearly defeated the preliminary coalition agreement at the January party conference, were appalled when, after announcing the coalition agreement last Wednesday, he not only reversed his earlier opposition to serving in a government headed by Merkel but said he would be foreign minister, replacing Gabriel, who had led the SPD since 2009 – the longest-serving leader since Willy Brandt – and had stepped aside so Schulz could become party leader. Indeed, there was such an uproar in the party that, 48 hours later, Schulz was forced to relinquish his claim to the ministry and announce he won’t serve in the new government.

The SPD will now conduct a postal vote of its 460,000 members to determine whether it will formally accept the coalition agreement and participate in a new “grand coalition.” The members will have until March 2 to vote and the result will be announced March 4. Will they endorse the coalition agreement? It seems inconceivable, even after the recent uproar, they wouldn’t do so, having clearly “won” the negotiation with the CDU and CSU over program and portfolios. But stranger things have happened. We’ll find out March 4.

In the meantime, on Tuesday, Martin Schulz resigned as SPD leader, effective immediately.  Olaf Scholz, the party’s choice for finance minister in the new government, was named acting leader until a special party congress in April elects a new leader – most likely, Andrea Nahles, leader of the SPD’s parliamentary group in the Bundestag.

Written by David R. Cameron, a professor of political science and the director of the MacMillan Center’s Program in European Union Studies.