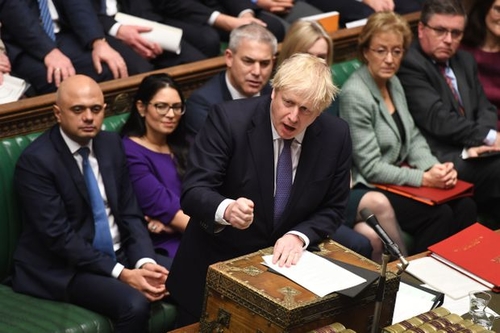 British Prime Minister Boris Johnson lost no time after Thursday’s Queen’s speech opening the new session of Parliament in moving forward with the process of approving the European Union (Withdrawal Agreement) Bill that will incorporate into UK law the provisions of the Withdrawal Agreement negotiated by the UK and EU. With the government’s backbenches in the House of Commons jammed with the Conservative MPs elected in the Dec. 12 landslide, the House gave the revised WAB its First Reading last Thursday and on Friday approved its Second Reading by an overwhelming majority of 358 to 234.

The revised WAB includes two exceptionally important changes, one having to do with the transition period, the other having to do with the negotiation of the future relationship with the EU. The Withdrawal Agreement negotiated with the EU provides for an implementation, or transition, period during which the UK, although no longer a member of the EU, will remain in its Internal Market and Customs Union. The Agreement stipulates that the transition period will end on Dec. 31, 2020 unless the UK requests and the EU grants, by July 1, 2020, an extension to Dec. 31, 2021 or Dec. 31, 2022. That provision was agreed because both the EU and UK understood it would be exceptionally difficult to reach an agreement in regard to all of the relevant issues involved in their future relationship during the implementation period.

The EU won’t issue its negotiating mandate until the Council and the European Council have approved it and the latter probably won’t do that until its mid-March meeting, which means the EU and UK will have roughly nine months to complete a negotiation that, if the agreements negotiated by the EU with Canada and Japan in recent years are a guide, would normally take several years. Prohibiting any extension of the transition period means the UK and the EU are highly unlikely to achieve the “ambitious, broad, deep and flexible partnership across trade and economic cooperation” foreseen in the Political Declaration setting out the framework for the future relationship agreed in October by the UK and EU. It means they will, at best, agree on a Free Trade Agreement limited to trade in goods, despite the fact that services account for 80 percent of the UK’s economy and 40 percent of its exports to the EU. It also means the UK could go over the cliff edge of a no-deal exit without any agreement at all at 11 p.m. on Dec. 31, 2020.

After approving the WAB on its Second Reading, the House rose for its Christmas recess. It will return on Jan.7 and, after completing the committee and report stages and Third Reading, will send the Bill to the House of Lords, where it will be quickly approved. On Jan. 29, the European Parliament will ratify the Withdrawal Agreement and on Jan. 31 at midnight in Brussels, 11 p.m. in London, the UK will leave the EU. Exactly eleven months later, the transition period will end, the UK will terminate its membership in the EU’s Internal Market and Customs Union, and the UK and EU will commence their future relationship, with or without a negotiated agreement about the nature of that relationship.