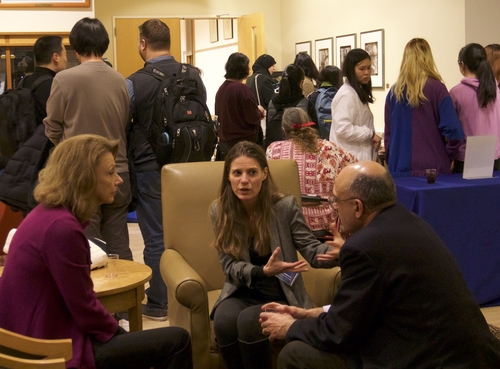 The inaugural conference for European Studies Graduate Fellows, titled “Europe in Flux,” brought together young scholars from across the globe on December 6-7 to discuss some of the most pressing social, political and cultural issues facing Europe today.  (see slideshow)

The conference opened with a panel on contemporary cultural production in Vladimir Putin’s Russia. Representing Cambridge, Columbia, and Yale, the three presenters offered a dynamic and engaging analysis of how contemporary political policies in Russia are impacting different cultural spheres and, in some cases, reconfiguring the practices once implemented in the Soviet Union. Moving westward from Russia, the second panel addressed contemporary environmental issues and the impact of current climate practices across the European Union. Showcasing varied methodologies from economics, political science, and environmental anthropology, this highly interdisciplinary presentation underscored the common challenges facing EU member states and the broader global North.

Highlighting the scope and variety of approaches to studying contemporary issues was a key aim for the conference organizers. “This fascinating conference took an expansive view of the concept of ‘Europe’ and of what it means to study it,” said Edyta Bojanowska, Professor of Slavic Languages and Literatures and Chair of the European Studies Council at the MacMillan Center. “It was exhilarating to watch young scholars from a wide variety of disciplines and institutional settings interact with one another’s work with so much excitement and intellectual generosity.”

Elena Adasheva-Klein, a Ph.D. student in Yale’s Department of Anthropology, echoed these sentiments, “Organizing the panel titled ‘Environmental Transitions in Europe and Russia: Public Discourse, Social Movements, and Policies’ for the inaugural Graduate Fellows Conference has been an enormous learning experience. Finding graduate students working in this area and connecting the subjects of four papers together in one panel taught me a great deal about the synergy of creative academic collaboration.”

The third and final panel of the first day saw scholars from the Australian National University, Oxford, and Yale discuss foreign investment in EU member states, the bloc’s current trading policies, and European strategic partnerships with Japan. “This economics panel was incredibly informative,” said Sarah Holzworth, a conference participant and graduate student from Columbia University. “It offered not only a comprehensive overview of topics like Chinese investment in Eastern Europe, but also innovative theories on the structure of the EU and individual EU member states’ relations with third party states.”

The discussion relating to Europe’s international partners continued during the day’s final event—a keynote speech about contemporary security challenges for Europe given by Ambassador Milica Pejanović-Đurišić, who serves as the Permanent Representative of Montenegro to the United Nations.

The following day began with a panel that offered four highly engaging papers on European and Eurasian Security, tackling wide-ranging topics from private military firms to how Russia’s demographic crisis is prompting the country’s current risk-taking engagements. While these papers examined shifting policies, those in the final panel addressed physical migration into Europe today. Pointing to common issues facing migrants in France, Germany, and the Netherlands, the three presenters spoke of strategies to combat xenophobia and promote integration. Lively discussions about the implications of immigration and other conference topics continued among participants during the closing lunch reception.