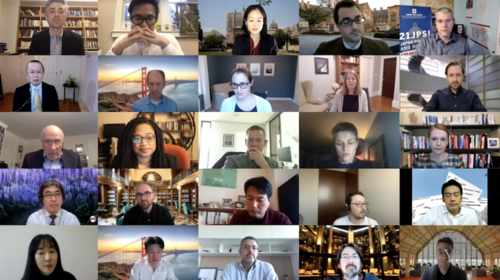 On March 25, the Yale University Conference on Japanese Soft Power in East Asia was held via Zoom. The conference was virtually hosted by the Yale University Council on East Asian Studies, sponsored by the Consulate General of Japan in Boston, and moderated by Yale Assistant Professor of Political Science, Dan Mattingly. Over the course of the conference, two scholarly teams presented their working papers on Japanese soft power.

This conference set out to better understand the current state of and conditions for soft power in East Asia, particularly in the rise of China as a soft power contender in competition with the traditional Japan “soft power superpower” as phrased by Professor Dan Mattingly. Both teams analyzed this research topic through a social science lens and presented captivating insights into future and stakes of soft power in East Asia.

The Logic of Soft Power Competition offered an expansion on Professor Joseph Nye’s research on soft power and its three main components: culture, political values, and foreign policies. Professor Nye was also in attendance as a discussant and offered his feedback to this paper as “a great empirical contribution” and put out a call for further research. The team looked at Japan and China as soft power senders and South Korea and Malaysia as Japan and China’s soft power targets. Video treatments and surveys were among the methods the team utilized in their research. Key outcomes the team presented at this stage in their research were the effects of soft power on economic consumption, trade cooperation, and security cooperation via key mechanisms of measuring the soft power’s “cool,” emotions (attached to), and political and economic trust from surveyed individuals. Although questions remained on how to expand the breadth and depth of the project, discussants were excited to see the team’s next steps.

Does Public Diplomacy Sway Public Opinion? approached the question of Japanese soft power in East Asia from a different perspective, diplomatic visits and the media. The efficacy of public diplomacy was at the core of their project. Their theory was that high-level visits as public diplomacy increased awareness and conveyed political messages contingent upon pre-meeting arrangements and media coverage. Their research design came primarily from two datasets: Gallup World Poll and the team’s original high-level visit data. Their identification strategy was based on comparisons of individuals surveyed before/after the first day of the high-level visit. The project spanned 15 leaders across 9 visiting countries over 11 years (2008-2018) and 38 host countries. The team concluded that public diplomacy does sway public opinion and is an effective tool to increase a country’s soft power resources. The discussants were also excited for this team’s research, findings, and policy implications. Professor Christina Davis did vocalize concern on separating “pomp from politics.” Scholar Naima Green-Riley suggested that the hypothesis that the media generally has a positive tone ahead of leader visits deserved a second look for nuances to this claim. Overall, similar to The Logic of Soft Power Competition, there was general excitement from the audience for the team’s project and next steps. Both groups received insightful feedback and encouragement at the successful conclusion of the conference.

The video recording of this conference is available on the Yale CEAS video playlist here Session 1, Session 2.

Written by Victoria Isabel Quintanilla for the Yale Council on East Asian Studies.