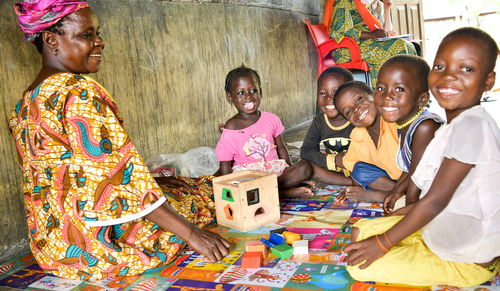 In 2017 and 2018, researchers evaluated a pilot program to improve early childhood development and education in two rural districts in Ghana. The results were promising, including marked gains in children’s cognitive development and nutrition. Now it is being implemented at scale across the country’s northern region, where most families live on less than $2 per day and 39% of 3- and 4-year-olds fall behind in critical cognitive skills.

Yale economist Orazio Attanasio and Sonya Krutikova from the Institute for Fiscal Studies are leading a research team to evaluate how it works.

“Our evaluation showed that the pilot program generated positive outcomes in many dimensions, including a reduction in malnutrition and increases in children’s cognitive skills,” said Attanasio, the Cowles Professor of Economics in Yale’s Faculty of Arts and Sciences. “We’re optimistic that this success can be repeated at a large scale.”

Developed by Lively Minds, a non-governmental organization that supports quality pre-school education in Ghana and Uganda, the intervention seeks to improve children’s health, cognitive and socio-emotional development, and their home and school environments. It trains volunteer women from local villages to run weekly, hour-long play sessions in which children participate in fun, interactive games that strengthen their cognitive, language, and social and emotional skills. It also encourages handwashing and provides monthly parenting courses that teach caregivers simple ways to improve home-based care, including nutrition, hygiene, and malaria prevention.

The scaled-up program is being introduced in 60 of the country’s 228 districts, reaching 4,020 pre-schools and more than 1.3 million children between the ages of 3 and 5.

Results from the earlier pilot program were encouraging. It produced significant benefits on children’s health, including a 22% reduction in acute malnutrition, better cognitive and socio-emotional development, and marked improvements in parenting practices, Attanasio said. Children from poorer households benefited the most.

Strengthening early childhood education is a pressing issue in Ghana and other low- and middle-income countries. Studies have shown that a third of Ghanaian pre-school children do not meet school readiness indicators and that those deficits persist and grow through primary school, where a quarter of students fall short of proficiency standards. At the same time, 20% of children under age 5 in northern Ghana have stunted growth due to malnutrition and poor health conditions.

Lively Minds supports Ghana’s government education service in training kindergarten teachers to implement the intervention in local public schools. (Ghana has universal pre-school.) The teachers then recruit women from their communities and train them to come to kindergartens and play with the children during school time. The volunteers deliver a curriculum centered on five activities: counting, matching, books, building, and shapes and senses. Lively Minds stresses the importance of direct contact between the children and the volunteers, who teach five to six children in a play station focused on one of the activities. The children rotate through each station. A sixth volunteer supervises the children who are not participating in a rotation; they play outdoors until their group enters the rotation. (The average class size was 58 students, meaning there were usually too many students for the five play stations to accommodate all at once.) Each child completes at least one rotation per week.

The local kindergartens are outfitted with “tippytaps,” simple handwashing devices. Children must wash their hands before joining each station.

The program is cheap: The pilot version cost only $19 per student per year. It is anticipated to cost just $7 per child when scaled up. The low cost of the program is not the only key element for its scalability, Attanasio said.

“The collaboration with the Ministry of Education in training the kindergarten teachers to train the volunteers is also crucial, as it uses the existing institutional infrastructure and embeds the program into the community.” he said. “This `train the trainers’ model has made the program quite scalable.”

Attanasio and Krutikova’s research team has received two large grants — one from the U.S. Agency for International Development and another from the U.K. Medical Research Council. This year, the researchers are collecting baseline data for the first group of school districts where the program is being initiated.

The researchers will collect data on health, cognitive, and social/emotional outcomes as well as the quality of the bureaucracy operating the program in each district. The study should be completed in 2024, Attanasio said.