Mounting evidence from Myanmar highlights need for full cooperation with investigations into the 3 C’s of genocide: Commission, Conspiracy, and Complicity 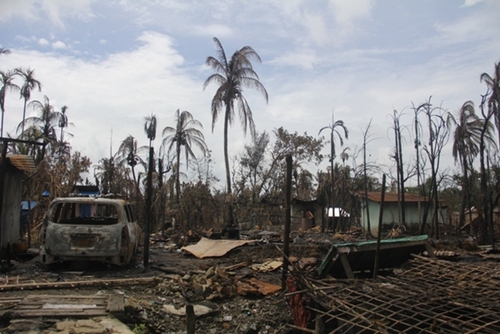 About a month ago, two soldiers from Myanmar crossed the border into Bangladesh and turned themselves in to local authorities. They were both seeking protection in the wake of a veritable bombshell of a confession each had (separately) made: namely to having participated, under orders, in apparently genocidal massacres of Rohingya villagers in eastern Myanmar. According to the New York Times, the two men—identified as Pvt. Myo Win Tun and Pvt. Zaw Naing Tun—are defectors from the Tatmadaw, Myanmar’s feared military, which stands accused of fomenting the violence that led to the displacement of over 1 million Rohingya, a Muslim minority in northwestern Myanmar.

The two men reported having been ordered, in separate directives, to “Kill all you see” and “Shoot all you see,” respectively. One of them, Pvt. Tun, reported that his unit “wiped out about 20 villages” and dumped the bodies in a mass grave. Earlier this month, both men were transported to the Hague, where the International Criminal Court is investigating possible mass atrocity crimes in Myanmar.

The confessions highlight three important issues. The first is about the narrative of violence in contemporary Myanmar. Myanmar’s government and military have denied any suggestion of genocide, blaming the violence on the Rohingya themselves (while refusing to acknowledge the validity of the Rohingya identity) and occasionally on local vigilantes whom they claim are occasional overzealous in exerting their right to self-protection. Rohingya refugees in Bangladesh and human rights observers elsewhere have extensively documented a different narrative, one in which the Myanmar state, through the Tatmadaw as well as its political and religious supporters, have actively encouraged and engaged in violence against the Rohingya in order to clear the area of their presence. The two confessions corroborate the latter accounts, breaking the wall of denial on the part of the perpetrating agents.

The second issue raised by the confessions relates to just who those agents are. The two defectors have pointed to their commanders, but it is unlikely—given the much wider scope of Rohingya-targeting violence known to all—that the genocidal impulse began there. Investigators must ask whether the individuals in leadership positions at the very top of the Tatmadaw either gave orders to commit the types of genocidal acts to which the defectors admitted or knew of such orders and failed to use their chain-of-command positions to stop them from being followed. And beyond the Tatmadaw command structure, the defectors’ testimony strengthens the legitimacy of inquiries into who else may have been complicit in such order—whether the National League for Democracy party led by Nobel Peace laureate Aung San Suu Kyi, the state’s allies in the international arena, and/or the multinational corporations that cooperated with the state. This latter group might include, for example arms dealers that supplied munitions, as well as telecom and social media companies whose platforms served as the transmission mechanisms for the incitement and commands that apparently predicated the alleged genocide.

The third issue relates to the duties of those states and corporations who find themselves entangled with forces committing genocide. These countries and corporations must cooperate with the various investigatory mechanisms—such as United Nations Commissions of Inquiry, state-level judicial processes, and independent investigations—that have been (or will be) created to illuminate the genocidal processes at work in Myanmar. They should acknowledge the extent of their complicity—or make clear that they could not have known the facts that connect their involvement to the gravest of international crimes. Failure or refusal to lay out what they knew and when they knew it smacks of obstruction of a critical judicial process—a process that has become an absolute necessity in light of the strong evidence of genocide. External actors’ intransigence would also suggest there lies reason to investigate just how deeply intertwined state and non-state actors based beyond Myanmar’s borders have been in the process that culminated in the genocidal campaign against the Rohingya.

According to the Convention for the Prosecution and Prevention of the Crime of Genocide (commonly known as the Genocide Convention), not only the commission of genocide, but also the conspiracy to commit genocide and complicity with the crime of genocide are all prosecutable transgressions of international law. Indeed, the United States has an obligation, as do all signatories of the Convention, to cooperate with a court with jurisdiction over international criminal law when there is sufficient cause to believe violations have occurred. Currently, two such institutions—the International Criminal Court and, the International Court of Justice (at the behest of the Gambia, displaying true leadership in the anti-atrocity regime among sovereign states—have taken up an investigation (in the former’s instance) or a case (in the latter’s) related to the allegations of genocide against the Rohingya. Under the Genocide Convention, the United States’ government and people—as well as their corporations—must fully cooperate with these judicial processes. For there to be any prospect of blunting the momentum of genocide in the 21st Century, with its dependence on digital technology and complicit state parties, demands nothing less.

Written by David J. Simon, Director of the Genocide Studies Program at the MacMillan Center at Yale University.