Museum and nation in the United Arab Emirates 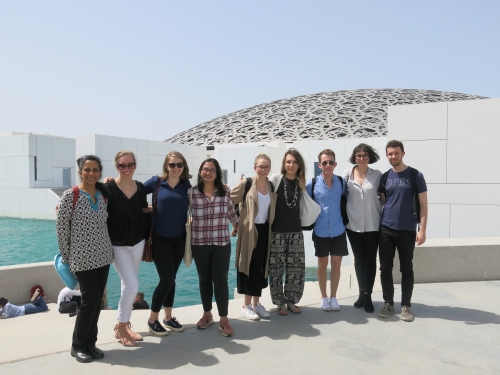 Over the course of the semester, the graduate History of Art seminar “Museum and Nation” has focused on the role of museums in generating national identity in the United Arab Emirates. Since January, Professor Kishwar Rizvi, who is chair of the Council on Middle East Studies at the MacMillan Center, and a group of 8 graduate students from five different departments have been studying museums and monuments in the Gulf States in the contexts of cultural development, urban renewal, capital investment, and branding — to name but a few. The class traveled to the UAE over spring break to conduct research on museums in Abu Dhabi, Dubai, and Sharjah.

The two-week trip, funded by Title VI, granted seminar participants first-hand exposure to culture and politics in the United Arab Emirates. On the importance of this trip to the class, Professor Rizvi said “the on-site fieldwork was necessary to put the museums that we studied in the seminar into their broader architectural and urban contexts; meeting curators, architects, and scholars allowed for better understanding the complex social negotiations that underpin life in the UAE.”

Soffia Gunnarsdottir, one of the seminar participants and a PhD student in the History of Art department, wrote a brief exposition on the multiple layers of the visual culture of Dubai as a teaser for the seminar’s September 2018 conference, where Professor Rizvi and the students will present some of their research and writing from the trip.

Creating visual culture in the UAE

The world is hard-pressed to find a city more preoccupied with its own display of luxury than Dubai. Like an urban Narcissus, the emirate exists in a constant state of self-reflection in the mirrored surfaces of its skyscrapers, custom chromed Lamborghinis, and gold-leaf coffee. Through government-initiated social media hashtags like #MyDubai and #VisitDubai, the city proliferates this same visual narrative on photo-sharing apps like Instagram and Snapchat. Tourists and residents alike, with bios ranging from “world traveler [globe emoji]” to “cultural producer,” post, geotag, and hashtag hyper-saturated shots and selfies with futuristic architecture, desert safaris, or malls in the backdrop, thereby constantly reinforcing the image Dubai seeks to build and project.

Occupying the other end of the emirate’s spectrum of visual culture are heritage exhibitions and historical sites. The average internet-surfer is likely less familiar with this side of Dubai, the simple reason being it just doesn’t photograph as well as an infinity pool or a camel ride. The city’s range of cultural extremes is perhaps best illustrated by an imaginary line that runs from the height of the Burj Khalifa — the world’s tallest building where the residents of the top floors live so close to the sun that they have to wait longer for it to set than anyone else on Earth before they can break fast during Ramadan — down to about two storeys below ground, the level at which the city has placed its single museum.

The Dubai Museum — a name that reinforces its singularity —  is an ethnographic display of the cultural heritage of Dubai. For less than $1, you can walk, in a single file line, through an underground exhibition of the city’s atemporal pre-oil “past.” Dioramas of wax figures and taxidermic animals narrativize Dubai’s history of bedouins, pearl divers, merchants, and camel herders in a way that is completely divorced from contemporary Emirati culture. The only date mentioned in the exhibit is 1971, the year the sheikhdoms that make up the United Arab Emirates declared their unification, giving the visitor the vague notion that Dubai’s cultural heritage is “very old,” as one label put it.

The display’s subterraneity relegates cultural heritage to the space of archaeological artefacts, while the structure around it, Al Fahidi Fort, the alleged oldest preserved structure in the city dating to 1787, guards it against the infiltration of any potentially disruptive historical information. As a result, the Dubai Museum’s visually narrativized cultural heritage becomes a relic; a curated repository of visual and social culture that locals and expats alike can refer to and draw from to conceptualize what Emirati “tradition” looks like. At the same time, it acts as a node of constancy that anchors the city’s heritage in an age of relentless urban development and renewal.

Al Fahidi fort rests on the intersection of at least three different neighborhoods known collectively as Bur Dubai. If you are lucky enough to arrive at the Dubai Museum on foot from the west, you walk through one of the city’s few remaining organic neighborhoods, the area surrounding the Grand Mosque and the Hindu Temple complex. For about two minutes — or however long it takes you to as you mosey through the meandering alleys yet untouched by the gated community rhetoricians of Emaar or Damac, the leading real estate developers in the UAE — you can experience what is left over of the authentic urban fabric of Dubai; hear the echoes of Punjabi hits from a distant car radio overlap with the call to prayer; smell the combination of flower garlands and Pakistani food; and snack on prasada after visiting the temple.

On the east side is the Al Bastakiya “historic district,” an extensively renovated complex of “traditional-style buildings.” According to 19th century colonialist travel narratives, some of the few extant written sources on the neighborhood, Al Bastakiya was at the time a gathering site for local merchants and foreign traders, mostly from Iran. Historically, Al Bastakiya was an important hub of cultural exchange. In the late 1980s — a pivotal time in the urban planning and design of the city — the area was under threat of demolition. According to mytho-historical legend, Prince Charles visited it after receiving a passionate letter from a British architect and who had spent time there and read the old travel narratives, and encouraged the sheikh to preserve it; the government agreed, and declared it a site of cultural heritage. What Prince Charles saw, however, were low-rise houses that, along with the rest of the city, had been built within a decade of his visit. The Al Bastakiya district was “redesigned” in 2005 to display the city’s heritage to visitors as its tourism industry gained momentum, and is today composed of identical monochrome “traditional” courtyard houses that house bougie galleries and detox-juice cafés. Whose heritage it preserves remains unclear.

To the north is Dubai Creek. If you choose to cross on an abra, its operator is required to take you past the royal family’s yacht collection, docked near a waterfront promenade currently under development. According to its billboards, the mile-long stretch promises to have hotels, shopping, and restaurants, but with a “heritage feel” on account of its proximity to Al Bastakiya and Al Fahidi. The creekside will modernize yet obstruct the sites behind it, perhaps seeking to elevate them to the city’s five star hotel Instagram-worthy aesthetic. The only way to see it now is to enter it, or hope to catch a glimpse of it from the top of the Burj Khalifa.

Two decades ago, the Dubai Museum was the city’s only deliberate display of its cultural heritage. Today, those same selective visual and material elements are slowly being incorporated into the urban fabric, perhaps in an attempt to reconcile the tension between the visual culture of luxurious leisure on the one hand, and cultural heritage on the other. To hear more about these exciting emergent issues, like displays at the Louvre Abu Dhabi and the ongoing proliferation of exhibition spaces and cultural heritage villages in Sharjah, and their consequences for multiple academic fields, plan to attend the Museum and Nation conference in September 2018 (date and time to be announced).