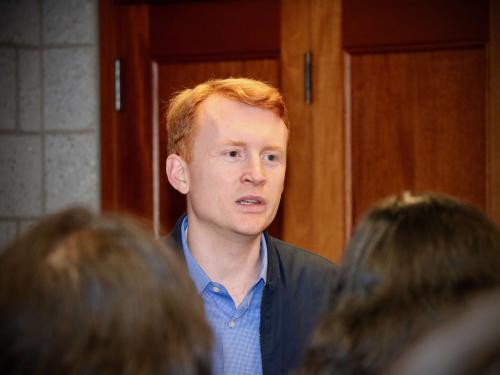 India’s power sector began a transformation in the 2000s, as tens of millions of new customers connected to the grid. The government opened up new market institutions to supply these citizens with power. Have these markets worked?

There have certainly been some growing pains. The pre-2000s power system was largely segregated by state and region. A legacy of this system has been huge regional imbalances across states, creating a need to send power from one part of the subcontinent to another. The new power market reflected this need through high prices in low-power regions.

In a recently published paper, Economic Growth Center and South Asian Studies Council affiliate  Nicholas Ryan shows that congestion on the power grid exacerbates market power – meaning sellers are able to raise prices with little risk of being undersold – in the Indian electricity market. The paper uses an economic model to explore how infrastructure investments would bring a return by increasing competition on the grid. The findings have relevance for market design as India adopts further reforms to supply a growing population of consumers on the grid.

Results at a Glance

In India, nearly a quarter of the population – roughly 300 million citizens – are not connected to the electric grid, and for those on the grid, demand for power far exceeds supply.

Nicholas Ryan, Assistant Professor of Economics at Yale University and an EGC affiliate, explained that countries seeking to expand electrification face a choice whether to invest in generation – making electricity where it is needed – or in transmission, getting electricity from where it’s abundant to where it’s scarce. Building energy infrastructure can increase transmission, but the returns on such investments depend on how firms price energy in response.

India provides a useful setting to study this question. While the state largely dominates power generation, a policy shift increased private suppliers’ market share from 10 percent to over 30 percent between 2003 and 2013.

The economics of energy transmission capacity

Energy congestion can occur when the market-clearing demand for energy exceeds the capacity of a region’s electricity grid, requiring it to import electricity from another region. Across India, the grid is congested approximately 46 percent of the time. When congestion occurs, the day-ahead market adjusts by splitting off any regions that are electricity-constrained and conducting additional market-clearing on imported electricity, raising or lowering prices until adequate capacity is reached.

Ryan accessed data from a short-term Indian energy market called the day-ahead market, where energy is bought and sold in a “double-sided auction” to be delivered the next day. These data allowed him to see the exact bids that the firms were offering and measure how firms change their bids in response to new infrastructure.

First, when power cannot be transmitted from one location to another, generating power in energy-scarce locations is costlier than transmitting it from an outside source.

A study by Yale’s Nicholas Ryan and coauthors finds that it may be counterproductive to view access to electricity as a right, rather than as a good that must be paid for.

Second, firms that are in energy-scarce locations can increase prices with little risk of being undersold. Ryan found that less congested regions had approximately five to ten energy sellers, while more congested regions only had two to three. Sellers were more likely to place higher selling bids in areas with fewer sellers. “They recognize that they’re the only game in town,” Ryan said, “so they can raise prices, and that adds an extra market power effect on the price above and beyond the difference in cost.”

To better understand sellers’ costs of supplying energy, Ryan then developed a model for optimal bidding behaviors in transmission-congested markets. The model suggested that the estimated marginal supply costs for sellers (which include private generating companies, industrial plants, state utilities, and distribution companies) in energy-constrained areas were relatively low ($40.10 to $75.50 per megawatt-hour). This confirmed that high energy prices in the short-term market were likely due to firms exercising their market power, rather than compensating for high supply costs.

When comparing these estimated supply costs with the prices at which energy is offered on the day-ahead market, Ryan found that on average, sellers bid 20 percent ($8.50 per megawatt-hour) higher than their estimated marginal cost.

Ryan’s model estimated that if all regions expanded their transmission capacities by 400 MW, optimal bid prices would decrease significantly. Moreover, a full equilibrium version of the model suggested that increasing transmission capacity to 1,200 MW would increase the market surplus by 22 percent.

This suggests that the gains from investing to expand India’s energy infrastructure are large and worth their cost. Ryan estimates that the benefit-cost ratios of increased transmission capacity are 1.85 in the North region and 2.74 in the South.

These findings, and similar studies on the effects of market power, are especially useful for developing countries like India, where the high costs of energy often exacerbate poverty, dampen business growth, and constrain inclusive economic development.

Moreover, the paper’s findings will become all the more important with a shift to renewable energy sources. “The wind will only blow in some places some of the time, and so you’re better off having a big portfolio of different places,” Ryan said. “India as a whole will be better off if you have solar in Rajasthan, wind off the coast of Maharashtra, another set of solar panels in Andhra Pradesh, and an integrated national grid so that depending on where production is highest, that energy can be produced and then distributed everywhere.”

Michael Greenstone, the Milton Friedman Distinguished Service Professor in Economics and Director of the Energy Policy Institute at the University of Chicago, said the study and its results will be useful outside India. “All societies have to make hard choices about how to invest resources to maximize the wellbeing of citizens,” he said. “Nick’s paper gives them a tool to make such decisions. I see it as part of a broader effort to improve energy infrastructure in low-income countries, not only to give more people power, but also to open the door to cleaner, cheaper, and more sustainable power.”