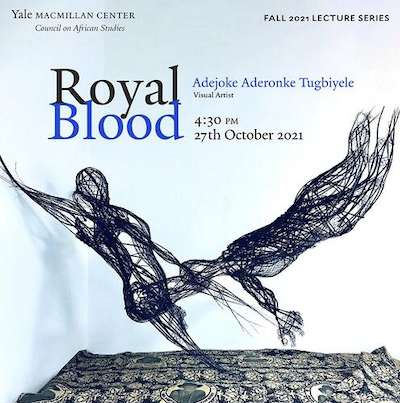 On October 27, the Council on African Studies at the MacMillan Center hosted award-winning visual artist Adejoke Aderonke Tugbiyele for a presentation and discussion on her recent work and its relation to her identity as a queer woman of Yoruba heritage. The event, “Royal Blood,” was moderated by Alexandra Thomas, a Ph.D. student in History of Art and African American Studies.

The event began with a brief screening of “Crown for Kamala,” a video performance Tugbiyele produced in collaboration with New Haven-based dancer Lindsay Bauer, a queer and lesbian artist.” Tugbiyele filmed the video at Lighthouse Point in New Haven. After the screening, Tugbiyele discussed the performance’s roots in traditional Yoruba aesthetics, while noting that she considers it to be a “contemporary revisioning of that work.” “I draw inspiration from this while I also queer the traditional space,” she said.

Tugbiyele also noted that in producing the performance, she “was also inspired…by the nomination and eventual election of Kamala Harris as the first woman Vice President in the history of the United States.” Tugbiyele clarified that her interest in Harris was not due to Harris’ biography per se, “but rather what her position symbolized — that structures seemingly reserved for white men are interrogated — and the continued exploration of the power of femininity in a pre-conceived masculine role.” “I’m bringing in a more spiritualized sensibility, and one that’s rooted in Yoruba performance,” she said.

Tugbiyele then went on to describe the ambitions of her work over the past decade, which includes work in sculpture, textile, dance, photography, and more. She explored her work’s roots in Yoruba sculpture and dance, in Nigerian heritage sites, and in queer aesthetics, among other sources. She also discussed her various aesthetic strategies: her use of light and dark, of male and female motifs, and of different fabrics and materials, such as palm trees, mass-produced commodities, and indigo, a dye with deep links to the African slave trade.

Throughout her presentation on her work, Tugbiyele consistently returned to themes of gender and sexuality. “As the phallus is often linked to ‘manhood,’ suggesting that masculine energy can also be achieved by women, and thus interrogating conservative notions of women as the ‘weaker sex,’” she said. She also argued that “from a political lens, queer love is often discussed alongside LGBT concerns, ranging from the AIDS crisis in America to protests around ‘corrective rape’ in South Africa.” While “activists and artists have used our platforms to criticize discrimination against LGBT people, and that work continues,” Tugbiyele also argued for the importance of art that aims for a “positive perspective and imagery of queer love.”

Jack McCordick is a senior Humanities major in Yale College