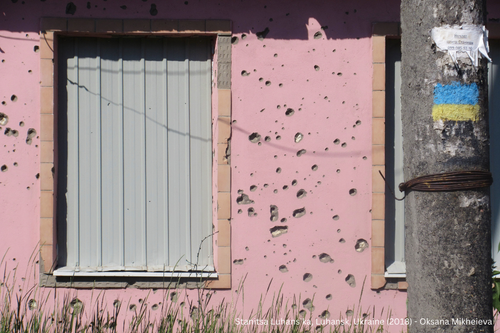 Written by Joy Yue, a Master in Public Policy student at Jackson School of Global Affairs at Yale.

On October 4, 2022, the Program on Refugees, Forced Displacement, and Humanitarian Responses at Yale MacMillan Center hosted Oksana Mikheieva, professor at the Department of Sociology of European University Viadrina in Frankfurt and Ukrainian Catholic University in Lviv, for a seminar on forced displacement in Ukraine. Drawing upon findings from field research, Professor Mikheieva discussed changes in forced displacement in Ukraine as Russian invasion escalated from the first wave (February 2014 to February 2022) to full-scale aggression (February 2022 onwards). She highlighted that many displacement trends and policy responses that we see in today’s war in Ukraine were heavily influenced by those during the first wave of Russian aggression (view video).
“Since 2014, more than two million people left uncontrolled territories of Ukraine and were forced to move both to other parts of Ukraine and beyond its border”, Mikheieva stated. Before full-scale Russian aggression, the number of internally displaced persons (IDPs) in Ukraine remained relatively stable at around 1.5 million since its very rapid increase in 2014, but “up to one-third of IDPs were avoiding official registration”, Mikheieva highlighted. These are mostly young IDPs who reported that they are reluctant to “pass the problem to the state” and want to avoid the stigmatization of displaced persons from the east. During the first wave of Russian aggression, most IDPs in Ukrainian government-controlled territories tried to settle near the line of demarcation to stay close to their home regions. Since the onset of the full-scale war, however, Mikheieva observed that people began to prefer moving to western and central regions to stay as far away from war zones as possible. As for external migration, Mikheieva pointed out that before February 2022, most Ukrainians left as labor migrants to neighboring countries because of their inability to receive refugee status in those countries.
Government response to internal displacement during the first wave of Russian aggression was limited and sometimes had a discriminatory and dehumanizing impact on migrants. “IDPs in the context of Ukraine state policy were perceived as a homogeneous group”, Mikheieva commented, “responses were not based on the needs, motivations, and behaviors of different segments of IDPs”. The example of pension status epitomizes the importance of disaggregation and inclusive response. Before February 2022, people who fled Russian aggression needed to register in Ukrainian government-controlled territories. Pensioners among IDPs had to go through an unnecessarily bureaucratic process of identification every few months in Ukrainian banks or government institutions to receive their pensions. Those who remained in the occupied territories needed to wait in queues for as long as several days to go through checkpoints and come to Ukrainian government-controlled territories for registration. The border-crossing process could be life-threatening at times and was unfeasible for elders with limited mobility and people with disabilities. During the COVID-19 pandemic, due to checkpoint closure, many people had to cross through the Russian Federation to reach Ukrainian government-controlled territories and pay a fine for “illegal border crossing”. Even when pensioners were able to complete the registration and identification processes, they had trouble accessing these funds because of Russian ban of Ukrainian websites in occupied territories and the difficulty of cashing the money, for which people often relied on illegal money exchange services. Simultaneously, IDPs suffered from stigmatization as “collaborators” and public resistance to granting them access to pensions.
Difficulties for IDPs are also manifested in employment prospects, mobility, access to social services, and political rights. Similar to pensioners, IDPs of pre-retirement age were a vulnerable group, who encountered great difficulties finding employment while having eligibility for neither government aid for incapacitated persons nor international organization support for children, the retired, and the disabled. Before the full-scale Russian invasion, people from occupied territories needed to acquire a permit for border-crossing from the Ukrainian security service. IDPs endured great psychosocial losses in this process because of the arbitrary and lengthy decision-making, oftentimes too late for people to make it to important life events happening on the other side of the demarcation line. Moreover, “those not immediately eligible for social services in Ukrainian government-controlled territories had to go through a humiliating identification process that involved mandatory loyalty pledges to the Ukrainian state”, said Mikheieva emphasizing that “this creates a feeling of inferior citizenship”. In terms of political rights, before 2020, all Ukrainian IDPs were deprived of the right to vote in local government elections, and those from Crimea continued to be defined as non-residents.
Ukraine’s state policy towards displaced persons changed dramatically since the onset of the full-scale war. “Policies in the second wave of aggression are more human and less discriminatory in nature”, she stated. Mikheieva explained this change as a result of the struggle of IDPs during the first wave of Russian aggression and the resulting public debate. Due to public outcry, healthcare services for IDPs are no longer tied to places of registration or local budgets. Since 2020, IDPs could vote during presidential as well as local elections.
Mikheieva identified the rise of volunteerism as another major contributing factor. She emphasized that volunteering activities in Ukraine are extraordinarily widespread and both spontaneous and organized. They offered services ranging from employment consultation, psychosocial support, to allowance payment renewal and housing support to IDPs. Mikheieva stressed that many organized networks today can find roots in spontaneously organized volunteering activities that arose at the very beginning of the conflict in 2014, and many IDPs were actively involved in helping one another. To Mikheieva, these networks are based on informal relationships and trust, which gave rise to a sense of solidarity that is crucial for resilience during displacement and war. “Euromaidan was a pivotal moment that strengthened solidarity among Ukrainians”, she said. Going forward, Mikheieva hopes to see flexible volunteerism models that can involve small and mid-sized businesses to bring profitable partnerships, and trust will continue to be the basis of all these relationships.