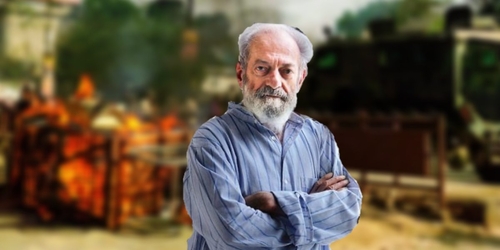 Paul R. Brass (1936-2022), who recently passed away after a long illness, made many important contributions over his long career, but he may be best known for two terrific books on India’s linguistic and religious politics, which quickly became classics in the broader field of ethnic politics.

The first of these, Language, Religion and Politics in North India (1974), was prompted by the observation that there were hundreds if not thousands of groups in India that could have gained official recognition over the years, but only some of these groups had successfully secured their own linguistic state, won reservations, or gained official status for their language.

What explained all this variation? Brass showed, using rich case studies of the Hindu-Urdu conflict, Maithili and Bhojpuri movements, and Hindi-Punjabi language controversies, that the answer lay in a mix of three things: a group’s own characteristics in terms of literacy, its group consciousness and level of modernisation; the state’s tacit rules for recognising such movements, which created incentives and rewards for identifying in some ways (language) rather than others (religion); and the savvy political strategies of some group leaders such as Sant Fateh Singh who pushed their claims in ways the state would find most acceptable.

Brass’s subsequent debates with Francis Robinson in Political Identity in South Asia (1979) over whether ethnic mobilisations are the product of instrumental manipulation or ‘primordial’ identities, with Brass taking the former position, are a classic in historically oriented political science. The purest statement of this instrumentalist Paul Brass was probably his introduction to his 1991 volume Ethnicity and Nationalism, where he argued that “Ethnic self-consciousness, ethnically-based demands, and ethnic conflict can occur only if there is some conflict either between indigenous and external elites and authorities or between indigenous elites.”

Brass’s second landmark book, Theft of an Idol: Text and Context in the Representation of Collective Violence (1997), represented a significant intellectual departure from this earlier work. His broader purpose in the book, drawing from Michel Foucault, is to question the very nature of the identities, categories and ‘facts’ that scholars (including himself) had used to understand India. Brass uses fieldwork and case-based exploration of several instances of group violence in Uttar Pradesh in the 1980s and 1990s to understand the political and social forces that lead some incidents to get coded as ‘communal conflict,’ others to be coded as ‘caste conflict,’ and others to never make it to the news at all. His book should be required reading for all those who have sought at various times to measure or categorise group violence because it makes us question important aspects of that whole social science enterprise.

If Brass had published only these two books, he would have established himself as a leading scholar of post-Independence India, but he did much more besides. His first book Factional Politics in an India State: The Congress Party in Uttar Pradesh (1965), based on 250 interviews he conducted for his PhD dissertation from 1961 to 1963 was an important systematic comparison of Congress and party politics in five UP districts. Brass explored how factions worked at the local level in places like Gonda, Deoria, Kanpur and Aligarh, and how they interacted with economic, agrarian, caste, and religious conflicts. He highlighted not just the destructive role of factions, but also the important role they played in recruiting new groups to the Congress, something that was theorised at a systemic level by Rajni Kothari and others.

Paul Brass continued to generate, throughout his long research engagement with India, many other key books and articles that traced topics as diverse as the break-up of Congress dominance, the rise of the important backward caste and farmers’ movements in the 1960s and 1970s, and the twists and turns of ethnic and caste politics in the 1980s, 1990s and beyond. One longstanding interest, going back to his early dissertation fieldwork in the 1960s, was understanding the roots of communal violence.

His 2003 book The Production of Hindu-Muslim Violence developed his earlier concept of “institutionalised riot systems” by which he meant the presence of violence specialists and others who were available to convert smaller incidents into violence and then interpret its meaning at times of political crisis and opportunity. The book effectively used a thematic and longitudinal study of Aligarh, which he had first visited in the aftermath of the 1961 Hindu-Muslim riots, as a case study to understand how communal violence was produced and for whose political and economic benefit.

Paul Brass’s last major project was to write a long-delayed multi-volume political biography of Charan Singh, whom he first met when Singh was minister of agriculture in UP in 1962 after he rejoined the Congress. Brass ultimately formed a friendship with Singh that lasted right up until the latter’s death in 1987 and had access to a treasure trove of interviews and Singh’s own voluminous archives. Brass saw the completion of this project as fulfilling a promise to a friend, though he was too principled a scholar to let that fact cloud his academic judgement of Charan Singh’s political successes and failures. The first volume, An Indian Political Life: Charan Singh and Congress Politics 1937 to 1961 (2011) takes the story up to Charan Singh’s exit from Congress in 1959, while two further volumes take the story from his election as the first non-Congress chief minister of UP in 1967 through the Emergency, his split with Morarji Desai and ultimate political defeats.

One indication of Brass’ leading stature in the field was that he was invited to write the volume on Politics of India Since Independence (1990) for the second Cambridge University Press series of the History of India. This synthesis, reprinted many times and used extensively for several decades in Indian universities and for exam preparation, was particularly strong on the politics of language, religion, and caste. Brass explored themes such as how the creation of linguistic states since 1953 had successfully reduced most (but not all) regional and secessionist conflicts, and how policies such as linguistic states and caste reservations created cross-cutting cleavages among Hindus that helped moderate Hindu-Muslim and north-south conflicts.

Personally, Paul Brass was sometimes gruff and argumentative, but he was also funny, loyal, willing to poke fun at himself, and was very generous to junior scholars and students, including the present writer. He never lost his Boston accent, and perhaps the rough and tumble politics of that city in his youth, before Boston Latin School put him on the path to academic success, helped inform some of his later research questions. He was a force, and his presence is much missed.