Prosecuting slavery in a time of freedom: Late 20th century enforcement of the 13th amendment 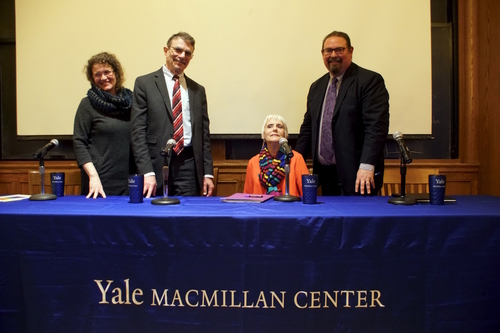 On April 10, the Gilder Lehrman Center for the Study of Slavery, Resistance, and Abolition, of the MacMillan Center at Yale University, hosted a panel discussion titled “Prosecuting Slavery in a Time of Freedom: Late 20th Century Enforcement of the 13th Amendment.” The panel featured three federal attorneys with decades of experience in prosecuting cases of contemporary slavery. (view video)

Karin Zipf, Professor of History at East Carolina University, moderated the panel. Zipf is a scholar of labor, gender, sexuality and race relations in the U.S. South. In Fall 2018, she was a Visiting Fellow at the Gilder Lehrman Center. Zipf has published two critically acclaimed books on life and labor in the south: Labor of Innocents: Forced Apprenticeship in North Carolina (2005) and Bad Girls at Samarcand: Sexuality and Sterilization in a Southern Juvenile Reformatory (2016).

The three panelists were all former Involuntary Servitude and Slavery (ISS) Coordinators in the Department of Justice Civil Rights Division: Bruce J. Berger, Susan J. King, and Ambassador Luis C. deBaca (ret.). Retired from law, Berger currently is an instructor in College Writing at American University. After leaving the Department of Justice, King served as Deputy Attorney General of the State of California for 23 years.

Berger was the first to hold the position of ISS Coordinator, having joined the Department of Justice (DOJ), Civil Rights Division, Criminal Section, in September 1976. Two years later, King accepted a job in the same unit, where she prosecuted cases in police brutality, cross burnings, slavery, and child sexual abuse. Both Berger and King dealt with several fundamental cases that changed the course of modern slavery prosecution for decades. Luis C.deBaca joined the unit in 1993. Through his work at the Department of Justice and, later, as Ambassador-at-Large to Monitor and Combat Trafficking in Persons in the State Department under President Barack Obama, C.deBaca revolutionized human trafficking discourse by pushing a victim-centered approach that has become the gold standard around the world.

Professor Zipf opened the discussion by asking the panelists to describe their personal experience when they first learned that slavery in America was not yet eradicated. Berger remarked, “I was completely unaware, really, about slavery in the United States until I got to the Civil Rights Division.” That first exposure to modern slavery, Berger remembered, was looking through the files of US v. Bibbs, a landmark case involving migrant workers in the South.

King expressed a different experience. She understood before her work at the DOJ that slavery still had a foothold in the United States. It was a different aspect of her first case that shocked her: “The actual purchase of a human being to an enslaver… I wasn’t so surprised about actual holding against her will… but the purchase was just shocking.”

The discussion then moved to the history of the ISS Coordinator position at the Department of Justice. For Berger and King, the role was much more informal than it is today – they both saw themselves as de-facto Coordinators because they had the largest slavery caseload. Additionally, while all held the title ISS Coordinator during their time at the Justice Department, C. deBaca described it as “a position of responsibility rather than authority” until recent years, in which the Civil Rights Division granted the ISS Coordinator a task force to work with, then a full unit of attorneys.

Professor Zipf’s next line of questions helped the audience understand how conceptions of the 13th Amendment’s role in prosecuting cases of modern slavery have evolved over the last few decades. Berger recalled expressing little attention to the 13th Amendment in his cases, whereas King began to experiment with its clauses in her work. King’s use of the amendment in US v. Kozminski paved the way for future ISS Coordinators to call upon the 13th in new and exciting ways.

Ironically, however, Kozminski was seen as a large setback for the Civil Rights Division at the time, as the appeal was lost once the case was out of King’s hands. Even worse for advocates, the Supreme Court set a new, higher standard for coercion, a fundamental aspect of any slavery case.

This new challenge saw the rise of attorneys like C.deBaca, who helped lead the charge of lobbying Congress to pass the Trafficking Victims Protection Act (TVPA), a landmark piece of anti-trafficking legislation passed in 2000. Since then, prosecutors have had many more tools at their disposal, allowing the Civil Rights Division to invest more resources into more slavery cases.

After the panelists discussed Kozminski and its legacy, Professor Zipf showed a short news segment depicting migrant farmworkers recounting experiences of being forced to work against their will. When asked to comment about patterns of fear as a means of preventing escape in cases of modern slavery, C. deBaca commented, “the notion of inculcating the climate of fear, so people are not going to try for the devil that is not known… they don’t know where they would go to get help, they are afraid of the police, they are afraid of the immigration services, all because of what [their enslaver] the family is telling them.”

Professor Zipf then opened up the panel to take questions from the audience. Professor Blight chimed in with the first question: how did we get to a place where people lost consciousness of the existence of slavery in the United States?

Berger, who received a Master of Fine Arts degree in creative writing in 2018, remembers an instance in which his short story based on an actual modern slavery case was rejected by an editor because “this kind of stuff doesn’t happen.” C. deBaca called such things “a willful misunderstanding,” and compared it to the “pretzels to which the UN system will set themselves up so they can talk about human trafficking in conflict zones… so they don’t have to talk about slavery.”

For King, one way this ignorance is fought is through spreading the word about prosecution. “The more cases we prosecuted, the more cases we heard about… as headlines hit in places like Ann Arbor, not so far away in Grand Rapids there’s another slavery case,” she said.

Another audience member asked a question fundamental to the Gilder Lehrman Center: how do we build on this work to go about eliminating slavery? Is that possible? King doesn’t see any obstacles worthy of preventing the work of the Civil Rights Division. “We can’t just throw our hands up and say, ‘these cases are really hard to prosecute, let’s just quit,’ because slavery is still happening… it is a scattershot approach, but I don’t know how else to do it,” she said.

Amb. C. deBaca added that he understands the importance of systemic change because it is likelier to get at the root of the issue of slavery than an individual court case. However, he also acknowledged that prosecution is fundamental to bringing justice to victims. “It’s that combination of systemic and individual justice” that will help eradicate slavery in the modern world, he believes.

The audience roundly the panelists for their decades of dedication to the cause of ending slavery in America and across the world. There is still much work to be done, but whoever does it will surely be standing on the shoulders of giants.