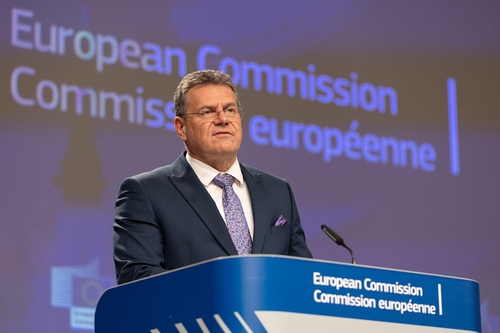 Today Lord David Frost, the British Cabinet Office Minister, and European Commission Vice President Maroš Šefčovič, the co-chairs of the Joint Committee that oversees implementation of the EU-UK Withdrawal Agreement, met online for the second time this week to take stock of the discussions between their teams in regard to the implementation of the Protocol on Ireland/Northern Ireland contained in the Agreement and, in particular, the difficulties that have arisen in the movement of goods from Great Britain to Northern Ireland. With the grace period—the temporary exemption from the rules of the Protocol—agreed last December for medicines produced in Great Britain and distributed in Northern Ireland set to expire at the end of the month, and with Northern Ireland experiencing a daily rate of Covid infection substantially greater than the surging overall rate of infection in the UK, many hoped the two sides would reach an agreement to ensure the continued supply of medicines for those in Northern Ireland who depend on them. That, unfortunately, didn’t happen. But the EU did announce today it will amend its existing legislation to ensure that medicines produced in Great Britain will continue to be available for those in Northern Ireland who depend on them.

In anticipation of that moment, last December Šefčovič and Cabinet Office Minister Michael Gove, Frost’s predecessor as minister and co-chair of the Joint Committee, announced a series of arrangements that would temporarily exempt animals, plants, chilled meats and other agri-food products, medicines, parcels and other goods arriving from Great Britain and destined for use in Northern Ireland from the EU border checks and customs procedures that would otherwise have applied as of midnight on December 31. The exemptions, known as grace periods, were granted to ensure that those goods would continue to be available to the citizens of Northern Ireland without delays or interruptions while businesses adapted to the new arrangements and procedures that would apply after the transition period ended. The grace periods varied in length but most were for three or six months and were subsequently extended. One of the most important grace periods, agreed last December and covering all of 2021, applied to medicines produced in Great Britain and distributed in Northern Ireland.

Šefčovič has identified the medicines issue as the most pressing one facing Northern Ireland. In a video conference on December 1 with members of the Northern Ireland Assembly, he noted that during a visit to Belfast in September he promised he would do whatever it takes to solve the issue, including amending the EU’s rules. After meeting with Frost two days later, he said, “Time to get medicines across the finish line + and show strong political will to advance on the rest.” And after his meeting with Frost last Friday, he tweeted, “Met David Frost to discuss package of solutions for NI. It’s crunch time for medicines, with the Commission ready to amend EU legislation.” Frost for his part tweeted, “We have made further limited progress on medicines but we have not reached agreement. I underlined the need for movement on all the difficult issues created by the Protocol, including customs, agrifood rules, subsidy policy, VAT/excise, & governance including the Court of Justice. We will not find a durable solution that does not deal with all these problems.”

Article 5(4) of the Protocol, pertaining to customs and the movement of goods, stipulates that the provisions of Union law—i.e., regulations and directives—in regard to a wide range of goods, listed in an annex that is more than 20 pages in length, shall continue to apply “to and in the UK in respect of Northern Ireland” after the UK’s exit. Included among the regulations and directives are more than a dozen that apply to medicinal products and involve provisions pertaining to the authorization and supervision of such products for human and veterinary use. Last December, the Joint Committee (i.e., Gove and Šefčovič) agreed to a grace period of one year, through the end of December 2021, for medicinal products produced for and distributed in Northern Ireland. The grace period—in effect an exemption from the Protocol—allowed the batch testing, that under the terms of the Protocol was required to be carried out in Northern Ireland before the products were placed on the market, to take place in Great Britain. And it allowed wholesale distributors in Northern Ireland to place medicinal products produced in Great Britain without the marketing authorization required by the terms of the Protocol. The grace period was granted in order to give all relevant stakeholders sufficient time to adapt to the UK’s exit from the EU and establish new supply routes where necessary, while providing for the undisrupted supply of medicines to Northern Ireland.

However, as the Commission noted in its “non-paper” on medicines, some producers, especially those producing generics and over-the-counter medicines, were finding it difficult to adapt their supply chains to the new situation. Specifically, it turned out to be too costly for some producers operating in Great Britain to move relevant regulatory compliance functions and personnel—the marketing authorization holder, quality control (batch) testing, those responsible for batch testing, release, and monitoring the pharmacies—to Northern Ireland. That being the case, the Commission proposed in its “non-paper” that, as an exception to EU law, the regulatory compliance functions could be located in Great Britain rather than Northern Ireland, provided certain conditions were met, including the application of all relevant EU legislation on medicines, the inclusion in the marketing authorization of a prohibition on sale outside Northern Ireland, the labelling of each pack with the safety features required under EU law, and the supervision and enforcement by UK authorities of the regulatory compliance of the producers and distributors to prevent the medicines from being distributed in the EU Internal Market.

The Commission plans to submit the proposals to the European Parliament and the Council as soon as all linguistic versions are available, and it urged both to start work on the proposals as soon as possible. In his statement today on the state of play in the discussions with the UK, Šefčovič not surprisingly emphasized the Commission’s proposal to change the EU’s rules on medicines so that “everyone in Northern Ireland will have access to the same medicines at the same time as elsewhere in the UK, while ensuring that the integrity of the EU Single Market is protected.” The fact that the Commission delivered on its promise that, if necessary, it would change its rules on medicines highlights, he said, the flexibility of the Protocol. He also noted that, in accord with the “standstill” arrangement agreed by the EU and UK in July, the current grace period for medicines, scheduled to expire at the end of the month, will continue until the new arrangements are in place.

In his statement today, Frost said there had been some progress in the discussions, but not as much, and not as quickly, as the UK had hoped, and the Commission’s proposals don’t solve the problems created by the Protocol. He did, grudgingly, acknowledge that “the main area of progress has been on medicine supply to Northern Ireland,” although he believes the UK’s proposal to remove medicines from the Protocol is “still the most straightforward solution, given that the provision of health services is an essential state function and that Northern Ireland medicines are overwhelmingly sourced from elsewhere in the UK.” But, he said, “there has been much less progress in other areas,” noting in particular the burdensome customs and sanitary and phytosanitary (SPS) health arrangements for goods moving between Great Britain and Northern Ireland, the regulatory burdens faced by manufacturers in Great Britain seeking to place their products on the Northern Ireland market, and as well as issues involving governance, democratic accountability, and dispute resolution. “Overall,” he said, “with the potential exception of medicines, I do not believe that the negotiations are yet close to delivering outcomes which can genuinely solve the problems presented by the Protocol….Our preference would be to reach a comprehensive solution dealing with all the issues. However, given the gravity and urgency of the difficulties, we have been prepared to consider an interim agreement as a first step to deal with the most acute problems….It is disappointing that it has not been possible to reach either a comprehensive or worthwhile interim agreement this year.” In concluding, he said, reiterating once again the UK’s threat to exercise its right under Article 16 of the Protocol to “unilaterally take appropriate safeguard measures,” Frost concluded, “It is disappointing that it has not been possible to reach either a comprehensive or worthwhile interim agreement this year. A solution needs to be found urgently early next year. For as long as there is no agreed solution, we remain ready to use the Article 16 safeguard mechanism if that is the only way to protect the prosperity and stability of Northern Ireland and its people.”

The talks will resume in January.