Recap: The War Next Door: Ukrainian and Russian Societies and the Approaching Prospect of Full-Scale Conflict 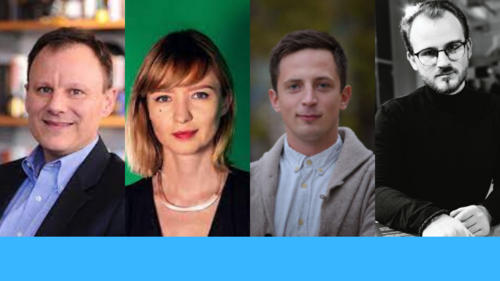 The REEES Program at the MacMillan Center hosted a panel discussion titled “The War Next Door: Society and Conflict in Ukraine and Russia” on February 18, 2022. Four guest speakers were invited to discuss recent tensions on the Ukraine-Russia border, as well as growing concerns about a Russian invasion. Following the deadlock in the January 2022 talks between the US, Russia, NATO, and the OSCE, the US maintained an optimistic stance on the issues discussed, but did not rule out Russia preparing an attack on Ukraine. Although the situation is still developing, there is hope that despite its alarming nature, it will remain a historical exercise.

The first of the four panelists to speak, journalist Angelina Kariakina, discussed the government’s role in Ukraine and its impact on the current crisis with Russia. Kariakina asserts that the government’s objective is to “keep everyone calm and the economy going,” a goal exemplified by the sense of normalcy that Ukrainians continue to experience in daily life. Children who continue to attend school and citizens who are concerned about the COVID Omicron Variant are two examples. The panelist, however, does not downplay the significance of the subject at hand, claiming that life in a society on the verge of war is a challenge for democracy. While the number of Ukrainians believing a Russian invasion is imminent may have decreased, Kariakina emphasized that “social cohesion and civil participation should continue to be treated as seriously by the government and society as improving the army.”

The second speaker, Polish journalist Pawe Pieniek, expressed reservations about the possibility of a Russian invasion of Ukraine in the near future. While the 170,000 Russian troops stationed on the Ukrainian border may appear to be a sizable number, Pieniek claims that is insufficient to conduct any meaningful military action. While there is no denying the existence of a threat, the panelist asserts that it should not be escalated beyond a level of subtlety. Indeed, his research appears to indicate that the increased isolation people have been experiencing over the last few years has resulted in a “new wave of [Ukrainian] people who simply want to do something.” For example, the realization by Ukrainian youth that they may not be safe has resulted in an increase in citizens enrolling in survival and first-aid training in the hope of assisting in the country’s protection.

Dr. Timothy Frye discussed the motivations for a possible Russian invasion, as well as the resulting consequences. It was emphasized that the current crisis in Ukraine is not the result of a single large-scale event, but rather of factors unique to Russia’s geography, dating back to the 2014 and 2015 conflicts in eastern Ukraine. Dr. Frye discussed the importance of public opinion in Russia and how an invasion of Ukraine could have dire consequences for it by framing Russian President Vladimir Putin as a “autocrat in an autocratic system.” Additionally, Russian public opinion overwhelmingly recognizes Ukraine as a sovereign state: “not many [Russians] believe Ukraine should be incorporated into Russia.” On the other hand, it is critical to consider the desires of the “powerful businessmen within Putin’s inner circle,” who may have preferences that differ from those of the general public.

Yevhenii Monastyrskyi, an MA Candidate in European and Russian Studies at Yale, was the fourth panelist to present. Monastyrskyi’s speech began with a discussion of “puppet governments spreading the news of impending war.” As a result of his own research and studies, he believes that Ukraine possesses greater experience and capacity to deal with the humanitarian aspect of the crisis. Indeed, by detailing Ukraine’s worst economic situation since independence in 2014-15, Monastyrskyi emphasizes the importance of refocusing the crisis on Ukraine’s relationship with the EU, as well as its readiness to handle the large influx of refugees into European countries in recent years. The panel concluded with a 30-minute Q&A session during which the panelists addressed numerous questions submitted by attendees, the majority of which concerned the individual’s engagement with the crisis.