The relationship between changes in climate and human conflict 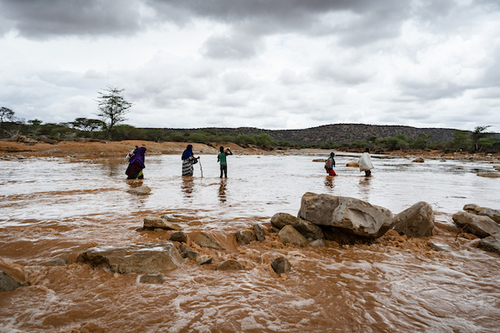 On October 26, the Program on Refugees, Forced Displacement, and Humanitarian Responses at Yale MacMillan hosted Marshall Burke, associate professor in the Department of Earth System Science at Stanford University, for a seminar on the causal impact of climate and environmental change on conflict. The talk covered Burke’s statistical analysis to understand these relationships and implications for the future of conflict and its mitigation in a warming world  (view video).

“If increased conflict is a consequence of a warming climate then that’s something we should account for when we make policy decisions about how to mitigate it,” Burke cited as one of the underlying reasons for studying the relationship between climate and human conflict. He also described his hope that further empirical inquiry could help identify the “underlying determinants of conflict” and “anticipate the future impacts of climate change.”

Burke presented his and his colleagues’ latest findings of a quantitative meta-analysis of existing studies to relate “changes in conflict outcomes to changes in observed climate.” In doing this, the researchers looked at three different levels of human conflict—inter-group, interpersonal, and self-harm—to understand what is the average effect of observed temperature and precipitation change across 68 different individual quantitative studies on these types of conflicts on fixed populations. Although the meta-analysis of conflict found that “precipitation on average has no or a small effect,” changes in average temperature were found to have a statistically significant effect on the likelihood of conflict at all levels. The mean effect across studies, measured as a percentage change in conflict outcome per standard deviation change in temperature to make the results comparable, was 6% increase in intergroup conflict, a 2% increase for interpersonal conflict, and a 1% increase for self-harm. In Burke’s words, temperature increase is “not doubling conflict, but it’s leading to measurable increases in the occurrence of these different types of conflict.”

Burke also discussed hierarchical models as an important tool for separating the true underlying heterogeneity of the estimated effects from sample variability. He framed these models as “a way of disciplining our understanding of whether these effects are the same or different” across studies, and whether differences in outcomes can truly be explained by true differences as opposed to sampling noise. They found that the wide variation found on the estimates between studies is likely true underlying variation particularly for self-harm and interpersonal conflict and to less extent intergroup conflict.

In examining possible confounding variables in the relationship between rising temperatures and conflict, Burke stated that “looking backwards, at least in some settings, we see pretty substantial relationships between warming in particular and various types of conflict, but that effect might differ as a function of economic conditions.” In other words, lower income areas are theorized as more vulnerable to the effects of warming on increased conflict, whereas higher income areas tend to remain more stable. He proposed local income as a possibly important factor, presenting the beginnings of studies investigating the “strong conventional wisdom” that there is “something insulating about wealth.” A statistical comparison of the effects of temperature on civil conflict, homicide, and violent crime by localized income in Sub-Saharan Africa and the U.S. provided promising preliminary support for this hypothesis using primary data.

These findings have particularly significant implications for regions with traditionally low variations in temperature, Burke pointed out. For regions where seasonal temperatures vary, a temperature increase of just a few degrees is not particularly significant in terms of standard deviation. However, for regions like the tropics whose climates generally maintain a stable temperature year-round, a change in a few degrees would point to a significant increase in standard deviations of temperature and predict a significant increase in conflict. “So, if you believe the recent past can be a guide for the future,” Burke summarized, “this would suggest we have a lot of warming coming down the pipe…that’s going to rapidly push societies in the tropics beyond what they’ve experienced historically.”

In looking toward implications for climate change and conflict based on these findings, Burke proposed the possibility that the future of conflict could become a kind of “horse race between warming climate and developing economies,” with temperature increases driving up the potential for conflict while developing economies raise local incomes and provide insulation pushing back against this effect. He cited recent high rates of economic growth in East and West Africa as a cause for some optimism, stating that, if development continues and local poverty levels continue to decrease worldwide, “our estimates would suggest that that’s going to…reduce the likelihood that a negative climate event triggers a conflict.”

Written by Maya Pasic, a senior history and English major in Yale college.