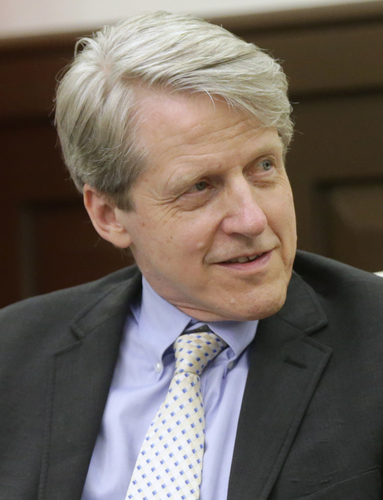 Robert J. Shiller, a 2013 Nobel laureate in economics and professor of economics at Yale University, wrote the following article that appeared in The Guardian on April 1, 2020:

We are feeling the anxiety effects of not one pandemic but two. First, there is the Covid-19 pandemic, which makes us anxious because we, or people we love, anywhere in the world, could soon become gravely ill and even die. And, second, there is a pandemic of anxiety about the economic consequences of the first.

These two pandemics are interrelated but are not the same phenomenon. In the second pandemic, stories of fear have gone viral and we often think of them constantly. The stock market has been dropping like a rock, apparently in response to stories of Covid-19 depleting our lifetime savings unless we take some action. But, unlike Covid-19, the source of our anxiety is that we are unsure what action to take.

It is not good news when two pandemics are at work simultaneously. One can feed the other. Business closures, soaring unemployment, and loss of income fuel financial anxiety, which may, in turn, deter people, desperate for work, from taking adequate precautions against the spread of the disease.

Moreover, it is not good news when two contagions are, indeed, global pandemics. When a drop in demand is confined to one country, the loss is partially spread abroad, while demand for the country’s exports is not diminished much. But this time, that natural safety valve will not work, because the recession threatens nearly all countries.

The effects financial anxiety has on the stock market may be mediated by a phenomenon that the psychologist Paul Slovic of the University of Oregon and his colleagues call the “affect heuristic.” When people are emotionally upset because of a tragic event, they react with fear even in circumstances where there is no reason to fear.

In a joint paper with William Goetzmann and Dasol Kim, we found that nearby earthquakes affect people’s judgment of the probability of a 1929- or 1987-size stock market crash. If there was a substantial quake within 30 miles (48km) during the previous 30 days, respondents’ assessment of the probability of a crash was significantly higher. That is the affect heuristic at work.

It might make more sense to expect a stock market drop from a disease pandemic than from a recent earthquake, but maybe not a crash of the magnitude seen recently. If it were widely believed that a treatment could limit the intensity of the Covid-19 pandemic to a matter of months, or even that it would last a year or two, that would suggest the stock market risk is not so great for a long-term investor. One could buy, hold, and wait it out.

But a contagion of financial anxiety works differently than a contagion of disease. It is fuelled in part by people noticing others’ lack of confidence, reflected in price declines, and others’ emotional reaction to the declines. A negative bubble in the stock market occurs when people see prices falling, and, trying to discover why, start amplifying stories that explain the decline. Then, prices fall on subsequent days, and again and again.

Observing successive decreases in stock prices creates a powerful feeling of regret for those who have not sold, together with a fear that one might sell at the bottom. This regret and fear prime people’s interest in both pandemic narratives. Where the market goes from there depends on their nature and evolution.

To see this, consider that the stock market in the US did not crater when, in September-October 1918, the news media first started covering the Spanish flu pandemic that eventually claimed 675,000 US lives (and over 50 million worldwide). Instead, monthly prices in the US market were on an uptrend from September 1918 to July 1919.

Why didn’t the market crash? One likely explanation is that world war one, which was approaching its end after the last major battle, the second battle of the Marne, in July-August 1918, crowded out the influenza story, especially after the armistice in November of that year. The war story was likely more contagious than the flu story.

Another reason is that epidemiology was only in its infancy then. Outbreaks were not as forecastable, and the public did not fully believe experts’ advice, with people’s adherence to social-distancing measures “sloppy”. Moreover, it was generally believed that economic crises were banking crises, and there was no banking crisis in the US, where the Federal Reserve System, established just a few years earlier, in 1913, was widely heralded as eliminating that risk.

But perhaps the most important reason the financial narrative was muted during the 1918 influenza epidemic is that far fewer people owned stocks a century ago, and saving for retirement was not the concern it is today, in part because people didn’t live as long and more routinely depended on family if they did.

This time, of course, is different. We see buyers’ panics at local grocery stores, in contrast to 1918, when wartime shortages were regular occurrences. With the Great Recession just behind us, we certainly are well aware of the possibility of major drops in asset prices. Instead of a tragic world war, this time the US is preoccupied with its own political polarisation, and there are many angry narratives about the federal government’s mishandling of the crisis.

Predicting the stock market at a time like this is hard. To do so well, we would have to predict the direct effects on the economy of the Covid-19 pandemic, as well as all the real and psychological effects of the pandemic of financial anxiety. The two are different but inseparable.