Rosenbluth and Shapiro discuss “Responsible Parties: Saving Democracy from Itself” 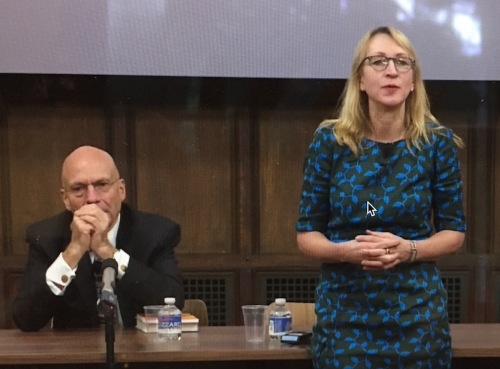 On October 2 in the Sterling Memorial Library Lecture Hall, two professors of political science advocated a view of politics they admit is contrarian: that decentralizing power to the grass roots worsens political decision-making. (view discussion)

“We begin with the recognition that voters are unhappy,” said Damon Wells Professor of Political Science Frances McCall Rosenbluth. “But the central organ of democratic accountability is the party.”

The talk began with brief presentations by the professors, followed by a question-and-answer session moderated by William Frucht, Executive Editor of the Yale University Press.

In Responsible Parties, recently released by the Yale University Press, Professors Rosenbluth and Shapiro argue that political systems with two strong parties are best equipped to negotiate and craft policies that will benefit the majority of people long-term. In a two-party system, Professor Shapiro argued, the winner takes all and the loser takes none—incentivizing parties to “put together a broad program” that would benefit not only core supporters but also swing voters, who could mean the difference between winning and losing.

The mechanism of policy-making, Professor Rosenbluth argued, would also be improved in a system with two strong parties.  She advocated a “bundling” approach, where the costs of every policy are measured against the costs of the others, minimizing short-term appeasement and promoting integrated, sustainable solutions.

He compared strong parties to teams, where “everyone’s pulling in the same direction and trying to get to the same destination.” American primaries, he suggested, weaken U.S. political parties because they require politicians to individuate themselves from members of their own party, and they consistently show low turnout. The small percentage of the electorate that does tend to vote in primaries, he said, disproportionately consists of extreme voters.

After the professors introduced the book, Mr. Frucht opened up the conversation by asking them how their views relate to the rise of populism worldwide—in particular, Brexit.

“It’s an example of do-it-yourself politics gone wrong,” Professor Rosenbluth responded. Referendums, Professor Shapiro added, are a way to “punt” on tough negotiations within a party.

One audience member asked the authors how they imagine the U.S. could get from “here to there.” Considering that superdelegates are in relative disfavor within the Democratic Party, how would the U.S. even begin to strengthen parties and party leadership in the way that Professors Rosenbluth and Shapiro propose?

“We’ll never get rid of primaries,” Professor Shapiro replied. “But one could imagine reform where it was held that in the event that the primary turnout is not, say, 75 percent of turnout in the previous general election, then [the primary] would be discounted.”

It could then be up to superdelegates or party leadership to decide on a candidate to run in the general election, Professor Shapiro suggested.

To close the talk, Mr. Frucht asked the professors how powerful parties would protect minorities. “Why shouldn’t [minorities] form a third party?” he asked.

Professor Rosenbluth acknowledged that the concern was a significant and difficult one. Today, she began, minorities are not often targeted for persuasion.

“In the current system, minorities are ignored because their vote can be counted on,” she said. By contrast, in what the authors consider a strong system, the two parties would be incentivized to factor the interests of minority groups into their decision-making, Professor Rosenbluth said.