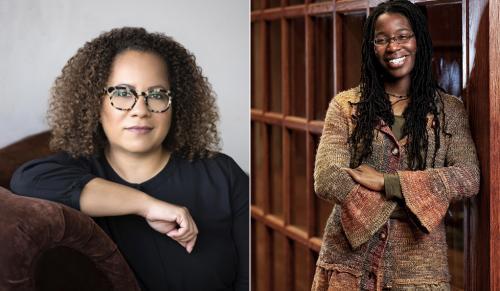 The 2018 Frederick Douglass Book Prize will be shared by two scholars. The co-winners are Erica Armstrong Dunbar, for her book “Never Caught: The Washingtons’ Relentless Pursuit of Their Runaway Slave, Ona Judge” (37Ink/Atria Books), and Tiya Miles, for her book “The Dawn of Detroit: A Chronicle of Slavery and Freedom in the City of the Straits” (The New Press). Dunbar is the Charles and Mary Beard Professor of History at Rutgers, the State University of New Jersey. Miles is Professor of History and the Radcliffe Alumnae Professor at the Radcliffe Institute for Advanced Study at Harvard University.

In addition to Dunbar and Miles, the two other finalists for the prize were Daina Ramey Berry for “The Price for Their Pound of Flesh: The Value of the Enslaved, from Womb to Grave, in the Building of a Nation” (Beacon Press) and Sharla M. Fett for “Recaptured Africans: Surviving Slave Ships, Detention, and Dislocation in the Final Years of the Slave Trade” (The University of North Carolina Press). All four books reflect outstanding research, analysis, and writing applied to the understanding of the centrality of slavery, and resistance to it, to the foundation of the United States.

This year’s finalists were selected from a field of approximately seventy books by a jury of scholars that included Catherine Clinton (Chair), of the University of Texas in San Antonio; Ada Ferrer, of New York University; and Sandra E. Greene, of Cornell University. The winner was selected by a review board of representatives from the Gilder Lehrman Center, the Gilder Lehrman Institute of American History, and Yale University.

In “Never Caught,” Dunbar tells the unknown story of how Ona Judge, a young woman enslaved by George and Martha Washington, escaped from bondage and fought to maintain her liberty in the face of relentless pursuit. Dunbar’s gifted prose and investigative skills make this book a page-turner. The book’s revelations about the 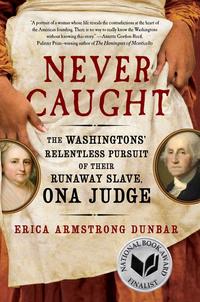 social life of black people in Philadelphia and their constant struggle to triumph over racism and repression illuminates how black lives have always mattered. Jury chair Catherine Clinton noted that the book is “not only a fascinating story of one enslaved woman’s daring flight, but a remarkable history of black women in the early Republic.” Clinton added that “Never Caught” is a “powerful and subversive book which excavates the mythic George and Martha Washington while compelling us to rethink freedom in an era of independence.”

In “The Dawn of Detroit,” Miles creates an innovative portrait of life on a northern borderland, weaving together political, social, environmental, economic, global, and local history. The book reveals the enduring centrality of slavery in early Detroit, through French, British, and U.S. rule, while also considering the imprint of the past on present realities. Within a framework of European imperial ambitions and centuries of struggles for freedom, Miles explores the layered history of Detroit as a contested shoreline where 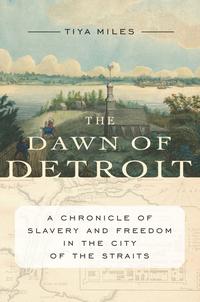 enslaved Native Americans and African Americans labored in the fur trade on lands originally stolen from the former. “The Dawn of Detroit” places the northwestern region and unfree people and labor at the heart of colonial and early American history, said Gilder Lehrman Center Director David Blight, Class of 1954 Professor of American History at Yale. Carefully researched and elegantly written, the book is “a stunning achievement in the study of Atlantic history,” Blight noted.

The 2018 Frederick Douglass Book Prize Jury described both “Never Caught” and “The Dawn of Detroit” as important additions to the field of scholarship dealing with the legacies of slavery in shaping the modern world. Both books, Clinton observed, help “reclaim the lives of those who otherwise would be forgotten.”

The Frederick Douglass Book Prize was established in 1999 to stimulate scholarship in the field of slavery and abolition by honoring outstanding books on the subject. The award is named for Frederick Douglass (1818-1895), the slave who escaped bondage to emerge as one of the great American abolitionists, reformers, writers, and orators of the nineteenth century.

The Gilder Lehrman Center for the Study of Slavery, Resistance, and Abolition, which is supported by the Whitney and Betty MacMillan Center for International and Area Studies at Yale, was launched in November 1998 through a generous donation by philanthropists Richard Gilder and Lewis Lehrman and the Gilder Lehrman Institute of American History. Its mission is to advance the study of all aspects of slavery and its destruction across all borders and time. The Center seeks to foster an improved understanding of the role of slavery, slave resistance, abolition, and their legacies in the founding of the modern world by promoting interaction and exchange between scholars, teachers, and public historians through publications, educational outreach, and other programs and events. For further information on events and programming, visit glc.yale.edu or contact the Center by phone at (203) 432-3339 or e-mail at gilder.lehrman.center@yale.edu.

Founded in 1994 Richard Gilder and Lewis E. Lehrman, visionaries and lifelong supporters of American history education, the Gilder Lehrman Institute of American History is the leading nonprofit organization dedicated to K-12 education while also serving the general public. Drawing on the 70,000 documents in the Gilder Lehrman Collection and an extensive network of eminent historians, the Institute provides teachers, students, and the general public with direct access to unique primary source materials. The Institute’s programs have been recognized by awards from the White House, the National Endowment for the Humanities, the Organization of American Historians, and the Council of Independent Colleges. For further information, visit gilderlehrman.org or call (646) 366-9666.