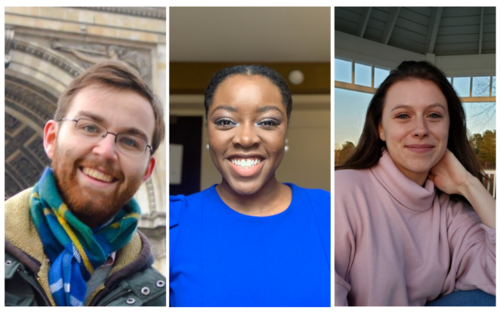 In the midst of the COVID pandemic, a group of African Studies MA students decided it was the perfect time to launch a podcast featuring conversations and stories by the students of African Studies. Titled Afrofiles, the idea for the podcast originated with Ed Hendrickson. “I had wanted to start a podcast for a really long time,” he said. “And in my own searching, I had found that podcasts about Africa were pretty limited and that there was a space for more conversation about it.” (Listen to Afrofiles podcast)

Akua Agyei-Boateng and Charlotte Bednarski are also a part of the team working on the podcast. According to Akua, the group really wanted Afrofiles to be an educational platform about all things Africa. “We talked about certain boundaries,” she said. “Are we including North Africa? Are we including the diaspora? It would be hard for me not to include the diaspora because my MA thesis has a lot to do with the connection between Africa and the United States.” In addition to it being educational, the group felt it was important to make it entertaining. “We wanted this to be a podcast that everybody and anybody can enjoy and really get information about what’s happening on the African continent…and just make it enjoyable.”

Working on the Afrofiles podcast has been an invaluable experience for the students. According to Charlotte, interviewing people was harder than she anticipated. “These are scholars and researchers and experts who have worked on these topics for their whole lives,” she said. “The conversation can go down a lot of different avenues. I don’t study the Italian occupation of Ethiopia, but that’s one of the interviews I did. It was a bit of a challenge because in order to ask follow up questions and really keep the conversation going, you have to be willing to be a bit vulnerable and admit that you don’t know something and you want to know more. And recognizing that that’s similar to probably what some listeners are feeling as well. The challenge is how to pose the questions that elicit the most interesting responses.”

Ed also said he learned “tons” from the project. “I’ve learned how to work in teams and organize my thoughts and be ready to present to other people,” he said. “All of the technical elements were really fun for me to explore, too. I’ve had a great time on some episodes making them more jazzy by adding some production value and then on other episodes I learned a lot about the challenges of audio production.”

The group has taped more than 20 episodes to date. Some of the topics they’ve covered recently include the African diaspora in China, the conflict minerals paradigm, LGBTQ+ rights in Ghana, migrants in Morocco, and the Italian occupation of Ethiopia.

The Afrofiles podcast is supported by the Yale MacMillan Center’s Council on African Studies. According to Stephanie Newell, the Council’s interim chair, it is one of its core projects. “We are so impressed with what Ed and the group of students have accomplished and are indebted to them for creating such a successful podcast,” she said. “We look forward to seeing what the next generation of students bring to Afrofiles.”

To listen to the Afrofiles podcast, visit this site.