The study of slavery and abolition in the Digital Age 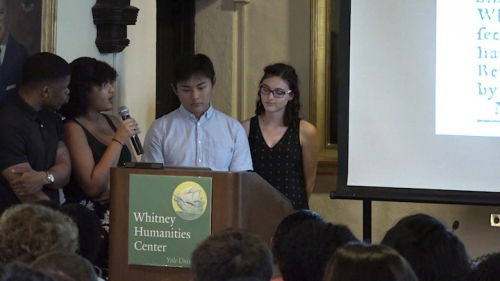 The digital world is not just changing our social interactions but the accessibility and impact of historical research as well. The Study of Slavery and Abolition in the Digital Age, held on May 4th, tackled the possibilities and challenges this new landscape engenders for projects regarding slavery, abolition, and resistance.

The symposium was co-hosted by the Gilder Lehrman Center for the Study of Slavery, Resistance, and Abolition at the MacMillan Center (GLC), the Digital Humanities Lab, and Public Humanities at Yale. David W. Blight, the Director of the GLC, opened the event. He acknowledged the work of Thomas Thurston, the Education Director of the GLC, one of the event organizers, along with the many digital efforts the GLC itself has taken on, including two documentary films and a podcast series. Professor Blight finished by recognizing the outreach efforts of the GLC: “We try to take Yale out into the world and see what Yale can do for the world as much as we try to do for ourselves.” This sentiment was echoed throughout the rest of the panelists, and seems to be at the heart of many of these digital research projects.

Next, Catherine DeRose, Manager of the Digital Humanities Lab at Yale, spoke about her own journey to the digital humanities through Victorian literature, and the challenges she and the Lab have encountered in their mission. Her last word before the panels began was to remind the room that “digitization is a necessary first step” but that the many projects highlighted at the symposium display how much labor is necessary to make the digital sources accessible and legible to the public.

The first panel, moderated by jub Sankofa, a Yale graduate student in African American Studies, featured panelists from three projects: Denise Burgher and Jim Casey from The Colored Conventions Project, which collects, transcribes, and analyzes the records from the Colored Conventions, which took place from 1830 until the 1890s; Linford Fisher, the Principal Investigator for the Database of Indigenous Slavery in the Americas, which hopes to fortify research on indigenous slavery by digitizing primary sources and illuminate the prominence of the practice; and Dawn Chitty and John Clegg, who spoke about the African American Civil War Soldiers Project, which crowdsources the transcription of carded military records of the 200,000 African Americans who fought in the Union Army during the American Civil War.

In a q&a session after the panelists presented their respective projects, Margaret Jerrido, an archivist at Mother Bethel AME Church in Philadelphia, PA, and a panelist, asked whether paper was going to be become obsolete. Audience members and panelists alike seemed to believe that paper wasn’t going anywhere. Casey said that “more often than not digitizing materials actually gets more people coming into the archive.” With that said, the panelists still insisted that Jerrido’s concern is one to keep an eye out for. Clegg implored that “we should never allow the paper records to become less accessible because we have the digital.”

The afternoon panel was moderated by Danya Pilgrim, a PhD candidate in American and African American Studies at Yale, and included Judith Giesberg, a professor at Villanova University, and Jerrido. Both women work on the project Last Seen: Finding Family After Slavery, a digital collection of “Information Wanted” advertisements from black newspapers taken out by individuals seeking information about family they had been separated from either by the domestic slave trade or the American Civil War.

The panel also featured Joseph Yannielli, a visting Digital Humanities postdoctoral associate at the GLC, who taught a Spring 2018 class called “Runaways, Rebels, Wenches & Rogues.” Students in his class presented their work on a database of runaway notices they had created, called Runaway New England. This site builds on the work done by previous students of Professor Yannielli’s at Wesleyan called Runaway Connecticut. The new database is a compendium of notices from Connecticut, Massachusetts, New Jersey, New York, and Rhode Island, dating from the colonial period to the Early American Republic era. In addition to the collection of the advertisements, there are plans to feature detailed research papers on individual ads, teaching resources for elementary, high school, and college classes, and a smartphone app, which would alert the user to nearby historical sites of resistance and rebellion.

All of the programs featured in the symposium demonstrated the value of collaboration between academics and community stakeholders. The Colored Conventions Project includes a community and historic church outreach committee led by Denise Burgher. The African American Civil War Soldiers Project has found a natural partner in Washington, D.C.’s African American Civil War Museum. And Last Seen: Finding Family After Slavery, which includes hundreds of advertisements from the Christian Recorder, which is still published by the African Methodist Episcopal Church, has partnered with Jerrido and the Mother Bethel AME Church in Philadelphia. In doing so these projects are not simply providing resources to passive “audiences”; they are engaging the public to become active partners in the creation and dissemination of the records of the thousands upon thousands of previously unacknowledged African Americans who made American history.

We invite you to visit the websites of all the participating panelists: The Colored Conventions Project, Database of Indigenous Slavery in the Americas, African American Civil War Soldiers Project, Last Seen: Finding Family After Slavery, and Runaway New England.