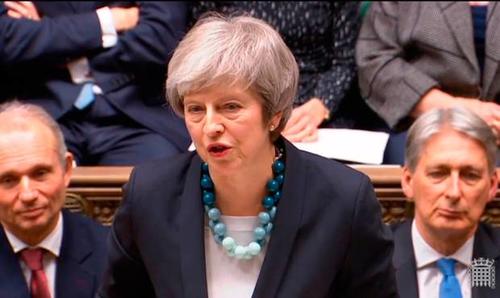 On Monday, at the start of the fourth of the five days scheduled for debate in the British House of Commons on a motion to approve the 585-page withdrawal agreement and 26-page political declaration on the future of the relationship with the European Union, Prime Minister Theresa May announced that, in view of the fact that, if voted upon on Tuesday as scheduled, the motion would be defeated by a “significant margin,” the government was “deferring” the vote and would, in the meantime, seek “further reassurances” in regard to provisions in the agreement pertaining to the border between Northern Ireland and Ireland.

The decision to unilaterally “defer” the vote caused an uproar. It brought a rare lengthy rebuke from Speaker John Bercow, who, although a Conservative like the prime minister, faulted the government for its “deeply discourteous” treatment of the House. More importantly, coming as it did only days after the government had been defeated on three votes immediately preceding the debate, including one in which, for the first time in British history, a government was found in contempt of Parliament for failing to comply with a Commons’ motion, the decision prompted calls from the leaders of several parties for the Labour Party, the official Opposition, to put forward a motion of no confidence in the government.

The vote was held on Wednesday evening and, as expected and after saying she would not lead the party in the 2022 election, May won easily and retained her positions as party leader and prime minister. Of the 317 Conservative M.P.s, 200 expressed their confidence in May’s leadership of the party while 117 said they did not have confidence in her leadership. Nevertheless, the fact remains that, if and when there is a vote on the motion to approve the agreement, it is likely to be defeated. Excluding the Speaker and three deputy speakers (one of whom is a Conservative) who don’t vote, and the seven members of Sinn Féin, who don’t attend, there are 639 voting M.P.s, meaning that, if all eligible M.P.s vote, approval of the deal will require 320 votes. There are 315 Conservative M.P.s eligible to vote. May’s minority government is supported in a “confidence and supply” arrangement by the 10 Democratic Unionist Party of Northern Ireland (DUP) M.P.s. As many as 100 Conservative M.P.s have made it clear they are opposed to the agreement and the DUP has made it very clear it is opposed as well. There was no chance whatsoever that, had the House voted on Tuesday, the agreement and declaration would have been approved. And there is virtually no chance that May will receive sufficient “reassurances” from the EU in regard to the provisions pertaining to the Irish border that would persuade enough of those now opposed to the agreement to support it and enable it to be approved by the House.

In the three days of debate prior to the government’s decision to defer the vote, those opposed to the agreement cited a variety of presumed defects. But undoubtedly the single most important, and most frequently-cited, defect involved the provisions in the 173-page Protocol on Ireland/Northern Ireland annexed to and a part of the binding withdrawal agreement that are designed to protect North-South cooperation and avoid, in all future circumstances, a hard border between the two parts of the island. Last December, the UK agreed that it intended to achieve those objectives through the overall EU-UK relationship to be negotiated after the UK’s exit and that, should that not be possible, the UK would propose specific solutions to address the unique circumstances of the island. In what came to be known as the “backstop,” it agreed that, in the absence of agreed solutions, it “will maintain full alignment with those rules of the Internal Market and the Customs Union which, now or in the future, support North-South cooperation, the all-island economy and the protection of the 1998 Good Friday or Belfast agreement.”

In his six-page written advice to the government on the legal effect of the Protocol – the document which the government initially refused to make available to the House, despite the passage on Nov. 13 of a motion directing it to do so, thereby prompting the vote that held the government in contempt of Parliament – Attorney General Geoffrey Cox noted that, by Article 6.1, the UK as a whole would form a single customs territory with the EU but the arrangements as a whole would apply differently in Great Britain (i.e., the rest of the UK apart from Northern Ireland) and Northern Ireland. The latter, he said, would remain in the EU’s Customs Union and would apply the whole of the EU’s customs acquis, and the Commission and CJEU [Court of Justice of the EU] would continue to have jurisdiction over its compliance with those rules. In addition, he noted that by Article 6.2, “Northern Ireland will remain in the EU’s Single Market for Goods and the EU’s customs regime, and will be required to apply and to comply with the relevant rules and standards. These include over 300 different legal instruments…The Commission and CJEU will continue to have jurisdiction over NI’s fulfilment of its obligations under these rules. This will allow NI goods to enter into free circulation in the EU, allowing them to pass between NI and Ireland without any checks and, therefore, any hard border.” He noted that, while Great Britain won’t be in the EU’s Single Market, it “will be obliged to observe a range of regulatory obligations in certain areas, such as environmental, labour, social and competition laws (the “level playing-field”), which reflects varying levels of correspondence to EU standards.” Great Britain wouldn’t be subject to the jurisdiction of the Court or Commission in regard to those obligations, but in the field of state aid the UK authorities would apply EU law and act in cooperation with the Commission and any breach would be actionable through the Joint [EU-UK] Committee within the governance arrangements of the withdrawal agreement, and directly by the Commission as a party in the UK courts.

Cox also noted, importantly, that Article 1.4 states that “the provisions of this Protocol shall apply unless and until they are superseded, in whole or in part, by a subsequent agreement” and allow “no obvious room for the termination of the Protocol, save by the achievement of an agreement fulfilling the same objectives….Therefore, the Protocol would endure indefinitely until a superseding agreement took its place…Further, the Withdrawal Agreement cannot provide a legal means of compelling the EU to conclude such an agreement.” In short, the provisions pertaining to the backstop are not time-limited, can’t be terminated unilaterally by the UK, and can only be terminated by a superseding agreement between the EU and UK. If there was any uncertainty about whether the agreement would be approved or rejected in the vote scheduled for Dec. 11, that uncertainty disappeared once the pro-Brexit Conservative backbenchers read the Attorney General’s legal advice.

In informing the House that the vote was “deferred,” May said she would seek to get “further reassurances” from the EU in regard to the “backstop” – specifically, in regard to its duration – and on Tuesday she met with Dutch Prime Minister Mark Rutte in The Hague and German Chancellor Angela Merkel in Berlin before meeting with European Council President Donald Tusk and European Commission President Jean-Claude Juncker in Brussels. All of those leaders made it clear that, while it might be possible for the EU to provide some “further reassurances” with regard to the “backstop,” the negotiation can’t be reopened.

On Monday, after she informed the House that the vote was being “deferred,” Tusk announced that he had decided to call a meeting of the European Council in its Article 50 format – i.e., without Theresa May – on Dec. 13 in addition to the long-scheduled European Council meeting scheduled for Dec. 13-14. In doing so, he said, “We will not renegotiate the deal, including the backstop, but we are ready to discuss how to facilitate UK ratification.” Likewise, after meeting with May, Merkel said that, while she remained confident a solution could be found, “there will be no further opening of the exit deal.” Speaking at the European Parliament in Strasbourg Tuesday afternoon, Juncker said, “The deal we achieved is the best deal possible. It is the only deal possible. There is no room whatsoever for renegotiation. But of course there is room, if used intelligently, to give further clarifications and interpretations without opening up the withdrawal agreement…. The withdrawal agreement will not be reopened.” He later tweeted, “We have a common determination to do everything to be not in a situation one day to use that backstop but we have to prepare. It is necessary for the entire coherence of the agreement and it is necessary for Ireland. Ireland will never be left alone.” After meeting with May Tuesday evening, Tusk tweeted, “Long and frank discussion with PM Theresa May ahead of Brexit summit. Clear that EU 27 wants to help. The question is how.”

In all likelihood, at their meeting Thursday in the Article 50 format, the European Council will do something similar to what the EU did after Dutch voters in a 2016 referendum blocked approval of the EU’s Association Agreement with Ukraine – prepare a short declaration that recognizes the UK’s concerns in regard to the Irish “backstop” and assures it that the EU will make every possible effort to reach a superseding agreement that will replace the Protocol so it never takes effect. But will that be enough to persuade enough of the M.P.s who are now opposed to the agreement to support it and, in so doing, enable it to win approval in the House? Probably not. And if the motion to approve the agreement is defeated, will Theresa May’s government survive a vote of no confidence in the House? Again, probably not.