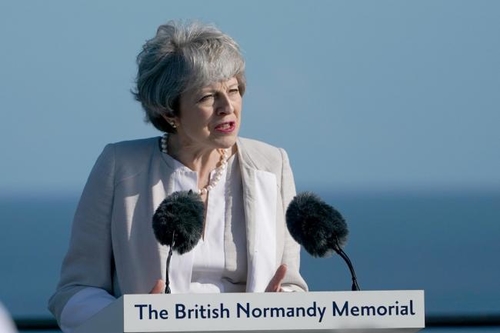 Today, British Prime Minister Theresa May resigned as leader of the Conservative Party. On Monday, the party will begin the process of selecting a new leader under new rules adopted earlier this week by the party’s 1922 Committee, composed of the Tory backbenchers – those MPs who have no positon in the government. The new rules are designed to more quickly narrow the field of candidates, which by Tuesday included more than a dozen MPs, to the two from whom the party’s 160,000 members will choose the next leader.

After the House of Commons had rejected the withdrawal agreement negotiated between the UK and the European Union twice – on Jan. 15 by a vote of 432 to 202, on Mar. 12 by a vote of 391 to 242 – May met with the 1922 Committee, which was under pressure from its members to change the party’s rules and allow another vote of confidence in her leadership. The rules prohibit more than one vote in any 12-month period and she had won such a vote in December. May told the Committee that if the House approved the withdrawal agreement she would step down as party leader and prime minister prior to the subsequent negotiation about the future relationship between the UK and EU, hoping that would induce some of the opponents of the agreement to vote for it. Nevertheless, on Mar. 29, the House rejected the agreement for the third time, by a vote of 344 to 286.

After a tumultuous month that saw the government lose a record number of council seats in  local elections in England, request and receive a second extension of the date on which the UK would leave the EU with or without an approved withdrawal agreement, agree to participate in the European Parliament election scheduled for May 23 in exchange for a third extension of the exit date, open talks with the Labour Party on the future relationship with the EU – talks that were designed to deliver a majority in the House in favor of the withdrawal agreement but which ultimately stalemated – and see a large portion of its electorate defect to the new Brexit party in the run-up to the EP election, on May 16 the prime minister agreed after a 90-minute meeting with the 1922 Committee, which faced continued pressure from its members for a confidence vote, that the timetable for selection of a new leader would be set immediately after a vote on the Second Reading of the Withdrawal Agreement Bill and regardless of the outcome of the vote.

The vote on the Second Reading was set for the first week of June, probably today, after the events commemorating the 75th anniversary of D-Day. But it never took place. After a speech on May 21 presenting her 10-point “New Brexit Deal” and her statement in the House the next day reiterating the speech and designed to persuade members to vote in favor of the Second Reading, the strong objections of many MPs, including a number of Cabinet members, to some of the provisions in her “Deal” – most notably, in regard to the future customs arrangement with the EU and the possibility of a second confirmatory referendum – made it clear the WAB was DOA. On May 22, the executive committee of the 1922 Committee met again and voted by secret ballot on whether to change the party rules and allow another vote of confidence. The ballots were sealed in an envelope that would be opened if she refused to step down by June 10. After meeting with Sir Graham Brady, the chair of the Committee, on May 24, Theresa May announced she would resign as party leader today and the process of selecting the new leader would begin next week.

The Conservative Party rules stipulate a two-stage process for electing a new leader: First, the Conservative MPs select two candidates to be presented to the party membership. Then the entire party membership decides by postal vote which of the two it prefers. The details of the procedure are left to the 1922 Committee. Until it changed the procedure this week, the Committee required that anyone wishing to be considered as a candidate had to be nominated by an MP and the nomination seconded by another MP. The party’s MPs would then vote for one of the nominated candidates in a series of votes, with the lowest-placed candidate in each vote eliminated from the next vote until there were only two candidates, after which the party membership would vote.

After Theresa May told the 1922 Committee in late March she would step down as party leader and prime minister prior to the negotiations about the future relationship with the EU if the House approved the withdrawal agreement, it was obvious that, regardless of the outcome of the third vote on the agreement, there would soon be a leadership contest in the Conservative Party and in early-to-mid May the first declarations of candidacy were made. On May 2, the day after he was elevated from minister of prisons to Secretary of State for International Development, Rory Stewart declared he was a candidate. Several days later, Esther McVey, the former Secretary of State for Work and Pensions, announced she too was a candidate. And immediately after Theresa May and the Committee agreed on May 16 that the timetable for selecting a new leader would be set immediately after a vote on the Second Reading of the Withdrawal Agreement Bill, Boris Johnson, the former Foreign Secretary, declared his candidacy as well: “I’m going to go for it,” he said. “Of course I’m going to go for it.”

After Theresa May announced on May 24 that she would step down as party leader today, ten more individuals announced their candidacy. As a result, by early this week 13 individuals had declared their candidacy and gathered endorsements from other MPs. In addition to Stewart (6 endorsements), McVey (6) and Johnson (48), they included Jeremy Hunt, Foreign Secretary (33); Michael Gove, Environment Secretary (33); Dominic Raab, former Brexit Secretary (24); Sajid Javid, Home Secretary (17); Matt Hancock, Health Secretary (13); Mark Harper, former Chief Whip (6); Andrea Leadsom, former Leader of the House (4); and Sam Gyimah, former Universities minister (2). In addition, Kit Malthouse, minister for Housing; and James Cleverly, Brexit minister, threw their hats in the ring. Several others – most notably, Philip Hammond, the Chancellor of the Exchequer, and Sir Graham Brady, who stepped down as chair of the 1922 Committee on May 24 – are regarded as possible candidates.

Faced with a plethora of candidates, on Tuesday the Executive of the 1922 Committee changed the rules pertaining to the first stage of the process by which a new leader is selected. Rather than requiring that a candidate be nominated by one MP and have it be seconded by another MP, the Committee decided that a candidate must, in addition, be nominated by six other MPs. And then, rather than eliminating only the lowest-placed candidate on the first and each following ballot, the Committee ruled that a candidate must obtain at least 17 votes on the first ballot to participate in the second ballot, and 33 votes on the second ballot to participate in the later ballots. On both of those, as well as on all later ballots, the lowest-placed candidate will be eliminated until there are only two candidates, after which the party membership, now 160,000, will vote. On Wednesday, the Conservative Party Board approved the Committee’s changes.

Today, in an exchange of letters with Cheryl Gillan and Charles Walker, the new co-chairs of the 1922 Committee, Theresa May resigned as leader of the Conservative Party. The Committee invited those interested in being considered for the position to submit their nominating materials. Nominations will close Monday afternoon. The first ballot will take place next Thursday, June 13. The second ballot will take place on Tuesday, June 18. Subsequent rounds of balloting will take place on Wednesday, June 19 and Thursday, June 20, after which the party will conduct the postal vote of its membership. The winner is expected to be announced during the week of July 22-26, before the Parliament’s summer recess which typically begins in late July and will last until Sept. 10.

Theresa May will continue as prime minister for the time being. Since the new leader will have been selected while the Parliament is still in session, it’s conceivable, even quite possible, that he or she will face a vote of confidence before the summer recess begins. And because the current government has only a very small working majority in the House, even with the support of the 10 MPs of the Democratic Unionist Party of Northern Ireland with which it has a “confidence and supply” arrangement – there are currently 313 Conservative MPs in the 650-member House – it’s conceivable the new leader could lose such a vote. Downing Street has made it clear that Theresa May will continue as prime minister until she submits her resignation to the Queen and that she won’t do that until she’s assured the new leader will command a majority in the House. Nevertheless, it’s quite possible – even, some would say, likely – that the selection of a new Tory leader will be followed, in the near future – perhaps in the early autumn – by an election.

A YouGov poll conducted on June 5-6 asked respondents which party they would vote for if there were a general election tomorrow. Taking account of the likelihood of participation and excluding those who said they wouldn’t vote or didn’t know who they’d vote for, 26 percent said they’d vote for the new Brexit party, 20 percent said Labour, 20 percent said the Liberal Democrats, 18 percent said the Conservatives, 9 percent said the Greens, and 5 percent said the Scottish Nationalists. One would think the possibility that Nigel Farage might lead the largest party in the House after a new election and that both the Tories and Labour would suffer significant losses of votes and seats would be enough to induce a majority of the House to support a government led by the new Conservative leader rather than force a new election – even if, as seems likely today, that new leader is Boris Johnson! But then again, one would have thought the dire economic consequences of a no-deal exit would have been enough to induce a majority to support, even if only reluctantly, the withdrawal agreement negotiated with the EU.

On June 6 75 years ago, more than 156,000, of whom 83,000 were from Britain, Canada or other members of the Commonwealth, landed on the Normandy beaches. Yesterday, accompanied by French President Emmanuel Macron, Theresa May unveiled the cornerstone for the British Normandy Memorial that will be built, with funds contributed by the British public, at Ver-sur-Mer overlooking Gold Beach, where the British troops landed. Her words, in commemorating the courage of those who participated and the sacrifice of those who lost their lives, were powerful and moving. Whatever her strategic and tactical errors over the past three years in regard to Brexit – and there were many – the British may soon regret her departure.