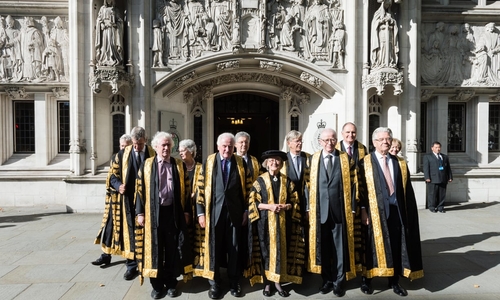 Today, the UK Supreme Court will start hearing appeals of the conflicting decisions of three lower courts in regard to Prime Minister Boris Johnson’s decision to prorogue, or suspend, Parliament from last week until a Queen’s Speech opens a new session on Oct. 14. The prorogation took effect soon after midnight last Monday evening, after a tumultuous week in which, among other things, Johnson lost six votes in the House of Commons and sacked 21 Conservative MPs from the parliamentary party and the Parliament enacted legislation that requires the government, in the absence of an approved withdrawal agreement with the EU by Oct. 19 or a vote of Parliament by that date to leave without a deal on Oct. 31, to request a three-month extension of the exit date.

Johnson made the decision to prorogue Parliament because he feared it would enact legislation that would weaken the government’s leverage vis-à-vis the EU in negotiating “a new deal, a better deal” by removing the option of leaving on Oct. 31 without a withdrawal agreement if the UK didn’t get the deal it wanted. The question for the Supreme Court is whether a politically-motivated decision by the executive that prevents the Parliament from meeting is justiciable — that is, subject to judicial review — and, if so, whether Johnson’s decision was unlawful. The High Court for England and Wales said the decision to prorogue Parliament isn’t justiciable. But the First Division of the Inner House of the Court of Session in Scotland said it is justiciable and the decision was unlawful.

On Aug. 27, in anticipation of the Parliament’s return from its summer recess, leaders of the Liberal Democrat, Scottish Nationalist, Plaid Cymru, and Green parties accepted the invitation of Jeremy Corbyn, the leader of the Labour Party, to discuss how they might prevent the UK from leaving the EU on Oct. 31 without a deal as Johnson promised the UK would do in the absence of a new deal. They agreed that when Parliament returned on Sept. 3 they would seek an emergency debate under House of Commons Standing Order 24 and, if the Speaker allowed the debate, would introduce legislation that a cross-party group of MPs had prepared over the summer that would require the government, in the absence of an agreement or a vote by Parliament by Oct. 19 to leave without a deal on Oct. 31, to ask the EU for an extension of the exit date to Jan. 31, 2020.

The next day Johnson asked the Queen to prorogue the current session of Parliament in its second sitting week (last week) until a Queen’s Speech opens a new session on Oct. 14. Prorogation is neither unconstitutional nor unusual; indeed, it’s the normal way a session of a Parliament is terminated. But what is highly unusual about this prorogation is that it will last for five weeks — prorogations typically last for only a few days — at a time when the UK faces the most important decision it has faced since 1945. Not surprisingly, the decision provoked a firestorm of protest from MPs and many others.

In a letter to MPs explaining the decision, Johnson noted the current session of the Parliament elected in June 2017 had lasted for more than 340 days (not counting days when it was in recess), which is longer, by a substantial margin, than any other session in almost 400 years. One result, he noted, was that parliamentary business had been sparse for some time. But the letter made it clear the real reason for the decision was his fear that the House might block the possibility of a no-deal exit — something that would weaken his leverage in negotiations with the EU over a new deal: “I want to reiterate to colleagues that these weeks leading up to the European Council on 17/18 October are vitally important for the sake of my negotiations with the EU. Member States are watching what Parliament does with great interest and it is only by showing unity and resolve that we stand a chance of securing a new deal that can be passed by Parliament.” For Johnson, “showing unity and resolve” means showing the EU the UK is willing to leave without a deal, however costly that might be, if it doesn’t get the deal it wants.

The first legal action against prorogation came in late July, almost a month before Johnson announced his decision, when Joanna Cherry, a Scottish National Party MP, and a cross-party group of more than 70 MPs and peers, with the support of the Lord Advocate, the Scottish government’s leading law officer, petitioned for a preemptive review of prorogation by the Outer House of the Court of Session in Edinburgh and a declaration that it would be unlawful for him to advise the Queen to prorogue the Parliament in order to prevent sufficient time for proper consideration of the UK’s withdrawal from the EU.

On Sept. 4, the judge hearing the case dismissed the petition, ruling that the prime minister’s advice to the Queen was, as a matter of high policy and political judgment, non-justiciable; Johnson’s decision to present the advice, he said, could not be assessed against legal standards by the court and it was therefore up to the politicians to settle the matter: “There has been no contravention of the rule of law. Parliament is the master of its own proceedings. It is for parliament to decide when it sits.” The decision was appealed to the First Division of the Inner House of the Court of Session, the highest court of appeal for all civil matters in Scotland.

On Sept. 5, Gina Miller, who in 2016, immediately after the Brexit referendum, successfully challenged the right of the government to inform the EU of the UK’s intention to leave without first obtaining the approval of Parliament, applied to the High Court for England and Wales for it to review Johnson’s decision. Since his request for prorogation was formally granted by the Queen and her decision can’t be contested, Miller’s application, which was supported by a statement from former prime minister Sir John Major as well as lawyers for the Scottish and Welsh governments, followed the example of the Scottish case and challenged his advice to the Queen and argued that the real purpose of prorogation was to prevent MPs from examining the government’s plans to leave the EU and preventing it from leaving without a deal.

On Sept. 6, a panel of three senior judges of the High Court dismissed Miller’s claim that Johnson had acted unlawfully in giving advice to the Queen to prorogue Parliament. In their 24-page judgment released several days later, they said. “The refusal of the courts to review political questions is well established…The prime minister’s decision that Parliament should be prorogued at the time and for the duration chosen and the advice given to Her Majesty to do so in the present case were political. They were inherently political in nature and there are no legal standards against which to judge their legitimacy.” They noted “it is impossible for the court to make a legal assessment of whether the duration of the prorogation was excessive by reference to any measure. There is no legal measure of the length of time between parliamentary sessions.” In concluding, they said, “the decision of the prime minister to advise Her Majesty the Queen to prorogue parliament is not justiciable in Her Majesty’s courts.”

But last Wednesday in Edinburgh, in response to the appeal of the lower court’s decision by Cherry and her cross-party group of MPs and peers, a panel of three judges of the First Division of the Inner House of the Court of Session reversed the lower court and concluded the decision to prorogue was justiciable and Johnson’s advice to the Queen to prorogue Parliament, and the prorogation that followed, were unlawful. After noting that parliamentary scrutiny of government action “is a central pillar of the good governance principle which is enshrined in the constitution” and that any attempt to undermine that pillar would be unlawful, Lord Carloway, the Lord President, concluded “the circumstances demonstrate that the true reason for the prorogation is to reduce the time available for Parliamentary scrutiny of Brexit at a time when such scrutiny would appear to be a matter of considerable importance, given the issues at stake.” “The court,” he said, “is not dictating the days on which Parliament should sit. That is a matter for Parliament to decide. It is merely holding that a particular attempt to restrict the available days is unlawful.” He concluded the court should, for those reasons, “grant a declarator [a judicial declaration] that the advice to prorogue Parliament on a day between 9 and 12 September until 14 October, and hence any prorogation which followed thereon, is unlawful and thus null and of no effect.” The other two judges concurred in separate opinions. The government said it would appeal to the Supreme Court and the judges held off on issuing an interdict, or injunction, ordering it to reconvene Parliament pending the hearing before the Supreme Court this week.

Last Thursday in Belfast, a judge on the High Court for Northern Ireland dismissed the claim of Raymond McCord, a victims’ advocate whose son was killed in 1997 by Ulster loyalists, challenging both prorogation and a no-deal Brexit, the latter on the grounds that it would lead to a hard border between Northern Ireland and the Republic that would undermine the peace process established by the Good Friday Agreement and the cross-border cooperation that now exists. The judge didn’t address McCord’s challenge in regard to prorogation since, he said, it had been the centerpiece of the English and Scottish cases and would be considered by the Supreme Court. But he said the evidence in regard to a no-deal Brexit belonged to the world of politics and that wasn’t an area in which the courts should intervene. McCord appealed that decision to the Court of Appeal in Belfast and it was heard yesterday. Also yesterday, he joined Miller and Cherry et al in their cases that are now before the Supreme Court.

Today, eleven of the twelve justices — one is dropped to avoid the possibility of a tie vote — of the Supreme Court began three days of hearings prompted by the conflicting lower court decisions. It’s the first time since the Supreme Court came into being ten years ago that it has been summoned for an emergency hearing outside its normal term and only the second time — the first occurred in the first Miller case — that the full court minus one is participating in a hearing. Will it come down on the side of the High Court of England and Wales that concluded the prorogation is not justiciable or that of Scotland’s Court of Session that concluded Johnson’s advice to the Queen and the prorogation itself are justiciable and unlawful? We’ll soon find out.