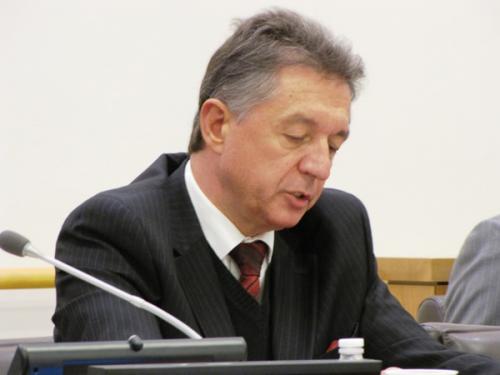 On March 2 the MacMillan Center welcomed former Ukrainian Ambassador to the United Nations Yuriy Sergeyev. The Ambassador, who is at Yale as a Visiting Fellow, was joined by professors Thomas Graham and David R. Cameron for a panel discussion on the political, social, and economic situation in Ukraine two years after the Maidan Revolution.

Opening his presentation with clips from the dramatic new documentary about the Maidan “Winter on Fire,” Ambassador Sergeyev stressed the heroism of the revolution of dignity, in its attempt to reform the country’s corrupt and authoritarian government.  The Ambassador stated, “Over 93 days what started as a student protest turned into a violent revolution and full-fledged civil rights movement. It was the beginning of the revolution of dignity, which is not over and continues today.” According to Sergeyev, the revolution of dignity was about national liberation, completion of decolonization processes that began in 1991 and a revolt against a corrupt elite, and the return to justice and civility. However, the Ambassador conceded that two years later, Ukraine is in a stale mate, similar to the one it faced in 2004 after the Orange Revolution. While the political system became more democratic and more transparent, unfortunately, many of Ukraine’s institutions continue to function in the same manner as before, and party and regional allegiances still matter greatly. From the standpoint of the revolutionaries, he added, the accomplishments of the new government are meagre. Current politicians continue to be preoccupied in personal battles and co-accusations of corruption, and little substantial is accomplished.

When it came to Ukraine’s failure to implement comprehensive reforms, the Ambassador cited a number of serious issues, namely: ending the war in the east, conducting real economic reforms, rewriting the constitution, and reforming the corrupt judiciary. For these reforms to occur, he stressed that politicians must harness their ambition and put through this legislation. Sergeyev also called on the EU and the IMF to continue assisting Ukraine in its rebuilding process. He noted that only a country with lasting and enforced peace and viable rule of law could attract foreign investment and improve its economy and infrastructure. Later he stated that Ukraine must abandon its past dependence on heavy Soviet-style industry and harness the intellectual power of its youth and try to become a leader in innovation.

As expected, the ambassador took a hard stance on Russia’s actions towards Ukraine, stating that Russia’s aggression and violation of international law in its acquisition of Crimea and invasion of Eastern Ukraine presented an immediate danger not just to Ukraine but to the international community as a whole. The Ambassador also noted that the current situation in the Donbass region had a high probability of being a permanent frozen conflict, a situation that according to him would not satisfy Ukraine but would be acceptable to all other negotiating parties, (the EU, the United States, and Russia). The Ambassador joked about western pragmatism towards the Donbass, saying “it is frozen, but not in our refrigerator.” In light of these developments, it would seem that an improvement in Ukraine-Russian relations would be imperative in order to move forward.

Professor Graham spoke directly after the ambassador and covered the Kremlin’s view of the crisis. He underlined Russia’s realist view of international politics and the historical, economic, cultural and regional importance that Ukraine has always held for Russia. In light of Ukraine’s importance even the western sanctions that have been detrimental to Russia’s economy over the past months seem a reasonable price to pay for keeping Ukraine in its sphere of influence, or at least not allowing it to join the European sphere. Professor Graham emphasized that the Kremlin hoped that Russian cooperation on other international issues, such as involvement in Syria, would take the focus off Ukraine. This strategy seems to be working, since certain previously discussed issues, such as the permanent status of Crimea, are no longer on the table. Russia also seeks to profit from the lack of unity within the Ukrainian government to continue pushing through its agenda in the international arena. With America once again pre-occupied with the Middle East, and the European Union absorbed in the continuing migrant crisis, Russia’s strategy of deflecting attention may be called successful.

Professor Cameron spoke about the last vital piece in the puzzle of Ukraine’s continuing crisis. He covered the European Union’s perspective on the situation in Ukraine. He highlighted that Europe was dismayed by the lack of progress made in the two years in all major government sectors where reform was necessary. Understandably, Europeans continue to be disappointed that there has not been constitutional reform in the country, that the Minsk II peace agreement has not been fully implemented, and that there was no referendum in Eastern Ukraine to decide the political future of the region. Professor Cameron noted the major concerns in Brussels about the lack of unity in the government and the conflicts between Yatseniuk and Poroshenko factions and various co-accusations of corruption. The EU is also troubled by Ukraine’s tanking economy, with a 12% decline in GDP in 2015, as well as Ukraine’s trade war and default on its debts to Russia. Additionally, the EU is worried about the $17.5 billion bailout from the IMF, since it is unclear whether that money is going to actually make systemic changes, or if it is being wasted on unnecessary projects, or being laundered by corrupt politicians. Despite the bravado rhetoric from Kiev, all of these concerns signal dwindling confidence in Europe that Ukraine can, and is able to, seriously reform.

With many concerns on the table, the panel opened the last half hour of the discussion to questions. During question time, the Ambassador stressed that while the rest of the world, and Europe in particular, might be suffering from “Ukraine fatigue,” what is happening in Ukraine is important to the rest of the world. He reiterated that Ukraine needs lasting systemic changes, and these types of changes are the ones that face the strongest obstacles both from former powerful government elites and from Russia. This seems to be the most critical issue the country must overcome. Whether or not the necessary reforms will occur will become evident in the months to come.