Update: Catalonia on the brink of Article 155 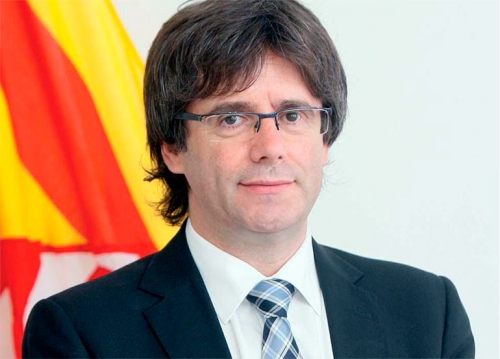 After the Catalan parliament enacted legislation on Sept. 6 calling for a binding referendum on October 1 to decide whether Catalonia should become “an independent state in the form of a republic” and the Spanish Constitutional Court suspended the legislation the next day, the Catalan and Spanish governments appeared headed toward the cliff-edge beyond which they would plummet into a full-blown constitutional crisis.

Now, almost two months later, after Catalonia nevertheless held the referendum, the Spanish government headed by Prime Minister Mariano Rajoy directed President Carles Puigdemont to clarify whether he had declared independence at a session of the Catalan parliament on October 10, Puigdemont refused to do so in two letters to Rajoy last week, and the Spanish government decided Saturday to ask the Senate to approve measures under Article 155 of the Constitution, Rajoy and Puigdemont have, like Thelma and Louise, gone over the cliff-edge, singing as they fell the chant of Tom Petty’s great anthem of defiance, “I Won’t Back Down.”

Article 155 of the Spanish Constitution, rightfully called the “nuclear option” and never before invoked by the national government, stipulates that if an Autonomous Community – Catalonia is one of 17 – doesn’t fulfill its obligations under the Constitution or other laws, or acts in a way that seriously prejudices the general interests of Spain, the government may, following approval by an absolute majority of the Senate, take whatever measures are necessary in order to compel it to meet its obligations or to protect the general interest and, in so doing, may issue instructions to the authorities of the Community.

Rajoy presides over a minority government that includes his center-right Partido Popular (Popular Party, PP) and the liberal Ciudadanos (Citizens, C’s), headed by Albert Rivera, a Catalan but fierce opponent of secession. But although it has less than a majority in the Congress of Deputies, the lower house of the national legislature, the government has a secure majority in the Senate, so whatever it proposes will be adopted when the Senate meets to consider the Article 155 measures on Friday.

Puigdemont, meanwhile, will in all likelihood reiterate in testimony before a Senate commission on Wednesday and in addressing the Catalan parliament Thursday what he said when he addressed the parliament on October 10 – that the Catalan people had determined that Catalonia should become an independent state in the form of a republic but that he had proposed on behalf of the government that it suspend the effects of the declaration of independence so that it might begin “a dialogue without which it is impossible to arrive at an agreed solution.” And he will no doubt once again reiterate his appeal for dialogue and call once again – fruitlessly – for intervention and mediation by the European Union.

But Puigdemont may also go further and call for the Catalan parliament to formally approve, before the Article 155 measures take effect, the “Declaration from the representatives of Catalonia” that he and the 71 other deputies who voted for the independence referendum signed in the parliament lobby after his October 10 speech. And he may call a new election, believing that, in the wake of the landslide vote for independence on October 1, the Rajoy government’s decision to use Article 155, and the massive public demonstrations of support for independence both before and after the referendum, the parties allied in the Junts pel Sí (Together for Yes) coalition – the Partit Demòcrata Europeu Català (Catalan European Democratic Party, PDeCAT) and the Esquerra Republicana de Catalunya (Republican Left, ERC) which together hold 62 of the 135 seats in the parliament and form a minority government that depends on the far-left Candidatura d’Unitat Popular (Popular Unity Candidacy, CUP) for its pro-independence majority – would win a substantial majority. Calling a new election might also enable the new parliament to side-step whatever Article 155 restrictions are placed on the current parliament.

Time is running out. But there is still time to resolve the crisis peacefully. As Iñigo Urkullu, the president of the Basque Autonomous Community and someone who knows about such crises, said on Monday, “This is a political conflict that requires a political solution based on dialogue and negotiations.…The crisis is a political one, a consequence of the lack of a political willingness for dialogue, even though honest dialogue is the only peaceful solution.”

He’s right. And there’s a great deal that could and would be discussed by Madrid and Barcelona if there were an honest dialogue. After all, the recent push to independence arose in large part because in 2010 the Constitutional Court annulled or applied a restrictive interpretation to large portions of a statute approved four years earlier by the Spanish parliament and government that granted additional autonomy to Catalonia and recognized it as a nation. Negotiations could conceivably result in a new Statute of Autonomy that would increase Catalonia’s autonomy and would, if necessary, pass muster with the Constitutional Court by amending the Constitution with regard to the status of Catalonia.

It wouldn’t be independence; but it would be a lot better for Catalonia – and Spain – than the widespread and sustained civil disobedience, economic destabilization, and frequent flashes of violence that would undoubtedly accompany Article 155 rule by Madrid.

David R. Cameron is a professor of political science and director of the Program in European Union Studies at the MacMillan Center.