Update: EU and UK talks on Protocol continue but still no agreement on key issues 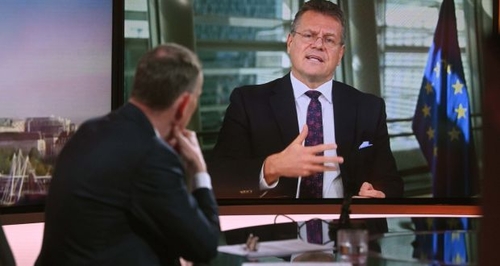 Today, Lord David Frost, the British Cabinet Office Minister, and European Commission Vice President Maroš Šefčovič, the co-chairs of the Joint Committee that oversees implementation of the EU-UK Withdrawal Agreement, met via video conference to take stock of the discussions this week between their teams in regard to the implementation of the Protocol on Ireland/Northern Ireland contained in the Agreement and, in particular, to the proposals put forward to address the difficulties that have arisen in the movement of goods from Great Britain to Northern Ireland. As their tweets after last Friday’s meeting in London and today’s video conference made clear, the teams still have not agreed on measures to alleviate those difficulties and the UK, as a result, still threatens to use the “safeguards” clause of the Protocol to do so unilaterally.

The Protocol sets out the arrangements the EU and UK agreed would be necessary after the UK left the EU in order to address the unique circumstances on the island of Ireland – specifically, those needed to maintain North-South cooperation, avoid a hard land border between the Republic and Northern Ireland, and protect the 1998 Belfast (Good Friday) Agreement in all its dimensions. The arrangements, agreed in 2019 after the Withdrawal Agreement negotiated in 2018 under which the UK would remain in a “single customs territory” with the EU had been rejected three times by the House of Commons, stipulated that while, as previously agreed, Northern Ireland would continue to adhere to the rules and regulations of the EU’s Single Market, the EU’s customs code and border procedures would apply to all goods arriving in Northern Ireland from Great Britain. In effect, the revised Protocol created a border in the Irish Sea for goods moving from Great Britain to Northern Ireland in order to avoid creating either a hard border between Northern Ireland and the Republic or, alternatively, a single customs territory between the UK and the EU.

The Withdrawal Agreement provided for a transition period after the UK left the EU on January 31, 2020 until midnight on December 31, 2020, during which the UK would remain in the EU’s Single Market and Customs Union. Last Christmas Eve, the EU and UK concluded their Trade and Cooperation Agreement (TCA), which was provisionally applied, pending approval by the European Parliament, as of January 1, 2021. That meant that since, as of that date, the UK would no longer be in the Single Market and Customs Union but, in accordance with the Protocol, Northern Ireland would continue to adhere to the rules and regulations of both, all goods and products arriving in Northern Ireland from Great Britain would be subject to the EU’s customs code and procedures.

In anticipation of that moment, in December Šefčovič and Cabinet Office Minister Michael Gove, the co-chairs of the Joint Committee, announced a series of arrangements that would temporarily exempt animals, plants, chilled meats and other agri-food products, medicines, parcels and other goods arriving from Great Britain and destined for use in Northern Ireland from the EU border checks and customs procedures that would otherwise have applied as of midnight on December 31. The exemptions, known as grace periods, were granted to ensure that those goods would continue to be available to the citizens of Northern Ireland without delays or interruptions while businesses adapted to the new arrangements and procedures that would apply after the transition period ended.

The grace periods varied in length but most were for three months and thus scheduled to expire on April 1. Frost, who had been the UK’s chief negotiator of both the 2019 Withdrawal Agreement and the subsequent TCA, was appointed Minister of State in the Cabinet Office and replaced Gove as co-chair of the Joint Committee on March 1, and two days later a ministerial statement was issued that the UK would unilaterally extend the three-month grace period for agri-food goods scheduled to end on April 1 for six months. That prompted the EU’s General Affairs Council to approve an infringement procedure against the UK. Subsequently, another dispute arose over another expiring grace period covering the shipment of chilled meats to Northern Ireland.

The paper argued the significant disruption in trade between Great Britain and Northern Ireland and resulting diversion of trade from Great Britain to Ireland as a source of goods for Northern Ireland, coupled with the societal and economic impact and the political and community instability that had occurred as a result, would justify the UK invoking the Article 16 “Safeguards” clause of the Protocol, which states, “If the application of this Protocol leads to serious economic, societal or environmental difficulties that are liable to persist, or to diversion of trade, the Union or the UK may unilaterally take appropriate safeguard measures.” The paper argued that Article 16 was designed to deal with precisely the type of issues that had arisen in regard to the movement of goods from Great Britain to Northern Ireland. On the other hand, it also noted that, if Article 16 were invoked, it could be applied only to the specific difficulties identified, would be subject to the uncertainties of the as-yet-untested dispute settlement process, and would, at best, be only temporary. For those reasons, it said the UK had concluded that, at least for the time being, it wasn’t appropriate for it to exercise its rights under Article 16, although such action “remains on the table as a possibility in the future if circumstances justify it.” Instead, the paper called for “significant change to the Protocol, through a new balance of arrangements which can operate pragmatically and accord with the unique circumstances of Northern Ireland.” Toward that end, it called for “urgent talks that can try to find a new balance for the Protocol: one that fully respects Northern Ireland’s place in the UK market, while maintaining the integrity of the EU’s own market…These talks need not look at all aspects of the Protocol…The focus should be on the arrangements covering trade in goods and on the overarching institutional framework put in place by the Protocol.”

The paper called for finding ways to remove the burdens on trade in goods within the UK while managing the real risks to the EU’s Single Market, which would mean ensuring that full customs and sanitary and phytosanitary (SPS) health processes are applied only to goods destined for the EU. In addition, it said ways had to be found to ensure that businesses and consumers in Northern Ireland could continue to have access to goods from the rest of the UK on which they have long relied. Importantly, it also said the governance of the Protocol should be “normalized” by having a “normal Treaty framework” such as exists with the TCA rather than an arrangement in which it is policed by EU institutions including the European Court of Justice. A negotiation covering that ground could, the paper said, “ensure that the new settlement that we reach is a true balance of interest: putting the operation of a rebalanced Protocol onto an equitable footing which all sides own and are ready to operate fully, without being a constant source of tension as at present.“

Since then, teams of EU and UK trade experts have been at work on the arrangements proposed by the Commission, and Frost and Šefčovič have met, alternating in London and Brussels, each Friday, although, because of the high and increasing rate of daily Covid infections as well as the threat of the new omicron variant, they met today by video conference. After last week’s meeting in London, Šefčovič tweeted, “Met David Frost in London to discuss the EU’s proposed solutions to facilitate the implementation of the Protocol on IE/NI + boost opportunities on the ground. Emphasis on the supply of medicines. A decisive push is needed to ensure predictability. We’ll meet again next week.” Frost, for his part, tweeted, “European Commission Vice President Šefčovič and I met today in London to take stock of discussions on the Northern Ireland Protocol. We discussed the full range of issues causing difficulties in Northern Ireland. We would still like to find a negotiated solution. But the gap between our positions is still significant and we are ready to use Article 16 to protect the Belfast (Good Friday) Agreement if other solutions cannot be found.”

On Wednesday, Šefčovič, speaking by video, told members of the Northern Ireland Assembly’s Executive Committee that the EU had made an effort to find solutions to the problems involving the movement of goods from Great Britain to Northern Ireland and called on the UK to “reciprocate” the EU’s efforts: “We have been showing flexibility and creativity in finding solutions within the framework of the Protocol….We made an important move towards the UK with far-reaching proposals for solutions. We need the UK government to reciprocate this now, we have no time to lose, and what is most pressing is the need to ensure continued supply of medicines from Great Britain to Northern Ireland….I made a promise during my visit to Belfast in September where I said I would do whatever it takes to solve this very important issue, including amending our own rules, and I will keep my word and our UK partners know that…. I know time is running out and I will push again this Friday in the discussion with Lord Frost to solve this matter. At the same time, I also have to be very, very clear that we are ready to move on our own if that should not be possible to push at this stage on the joint approach.” He mentioned that, after extensive consultations with British and EU drug producers, they had offered guarded approval of the EU’s legislative proposal.

After today’s meeting, Šefčovič tweeted, “Met David Frost via video conference to discuss package of impactful solutions for NI. Time to get medicines across the finish line + show strong political will to advance on the rest. This will translate into real benefits for all communities in NI. We speak again 10 Dec.” Frost for his part issued a statement in which he said, “We covered the full range of outstanding issues and I welcomed the Commission’s professed readiness to make progress on them. I made clear that the UK still wanted to find a negotiated solution if that was possible and was ready to keep working constructively and intensively to that end. Nevertheless the gap between our positions is still significant and progress on many issues has been quite limited. There has been some potential convergence on the medicines issue but agreement has not been reached.. We have been unable so far to consider all the detail of the EU’s proposals in the way we need to for this sensitive, critical, and highly technical area, where solutions must work in practice and genuinely solve the problems. We continue to believe that more progress is needed on customs and SPS arrangements….There have been some constructive talks on subsidy control but the issue remains unresolved, as does the wider issue of governance.” In concluding, he said, “Our position remains as before: that the threshold has been met to use Article 16 safeguards in order to protect the Belfast (Good Friday) Agreement, if solutions cannot be found. I will speak again to Vice President Šefčovič next week and our teams will have intensified talks in the coming days.”

The negotiations will continue. But as Šefčovič said on Wednesday, time is running out—for both sides.