Update on the Russia-Ukraine crisis: Negotiations start next week 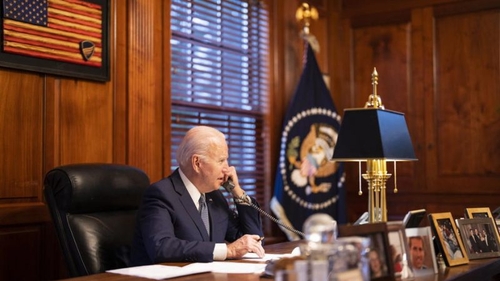 Next week, three separate-but-linked negotiations involving the U.S., NATO, and Russia, with Ukraine in the wings, will get underway in a multilateral effort to resolve the crisis created by the  recent buildup of more than 100,000 Russian troops, accompanied by tanks, artillery and other equipment, near Ukraine. On January 9 and 10, representatives of the U.S. and Russia, led by U.S. Deputy Secretary of State Wendy Sherman and Russian Deputy Foreign Minister Sergei Ryabkov, will meet in Geneva under the umbrella of the Strategic Security Dialogue initiative agreed by Presidents Biden and Putin at their Geneva summit in June. On January 12, the NATO-Russia Council will meet in Brussels. And on January 13, the Permanent Council of the Organization for Security and Co-operation in Europe (OSCE), which includes Russia and Ukraine as well as the U.S. and all other members of NATO, will meet in Vienna.

On December 7, Biden and Putin spoke for two hours in a video call prompted by U.S. and NATO concerns over the buildup—a buildup that was itself prompted by Russia’s concerns that Ukraine, with the support and assistance of the U.S. and NATO, might attempt to retake the territory in eastern Ukraine controlled since 2014 by pro-Russian separatists as well as its longer-term and more strategic concerns that Ukraine might in the not-too-distant future become a member of NATO. The White House read-out of the call said, “the two presidents tasked their teams to follow up, and the U.S. will do so in close coordination with allies and partners.” The Kremlin released a statement that said in part Russia “is seriously interested in receiving reliable, legally binding guarantees ruling out the eastward expansion of NATO” and the deployment of “weapons systems posing a threat to Russia in close proximity” to it and said the presidents had “agreed to task their representatives with entering into detailed consultations on these sensitive issues.”

Two days later, Biden spoke with Ukrainian President Volodymyr Zelenskyy and, according to the White House read-out of the call, “voiced the deep concerns of the U.S. and our European Allies about Russia’s aggressive actions towards Ukraine and made clear that the U.S. and our Allies would respond with strong economic and other measures in the event of a further military intervention. He reaffirmed the United States’ unwavering commitment to Ukraine’s sovereignty and territorial integrity.” He also “made clear that the U.S. and its allies and partners are committed to the principle of ‘no decisions or discussions about Ukraine without Ukraine’.”

The draft agreement on measures to ensure the security of the Russian Federation and member states of NATO would commit the parties to not strengthening their security individually or within international organizations, military alliances, or coalitions at the expense of the security of the other parties and not creating conditions or situations that pose or could be perceived as a threat to the security of other parties. It would commit the states that were members of NATO prior to 1997—the first post-Communist expansion of NATO, involving Poland, Hungary and Czechia, took place in 1999—to not deploying military forces and weapons on the territory of any of the other European states in addition to the forces that were stationed in those states as of 1997. It would commit the parties to not deploying land-based intermediate- and short-range missiles in areas that would allow them to reach the territory of the other parties; would prohibit the member states of NATO from conducting any military activity on the territory of Ukraine as well as other states in Eastern Europe, the South Caucasus, and Central Asia; and would prohibit the NATO member states from conducting military exercises or other military activities above the brigade level in a zone on either side of the border between the Russian Federation and the states allied with it. And of particular relevance for Ukraine, Article 6 would prohibit “any further enlargement of NATO, including the accession of Ukraine as well as other states.”

Two days after giving Donfried the draft treaty and agreement, Russia issued a brief press release in which it said, “The US party was given detailed explanations regarding the logic of the Russian approach, as well as the relevant arguments. We hope that the United States will enter into serious talks with Russia in the near future regarding this matter, which has critical importance for maintaining peace and stability, using the Russian draft treaty and agreement as a starting point.” A week later, the U.S., NATO, Russia and the OSCE announced the sequence of negotiations that will open next week.

Last Thursday, Biden and Putin spoke again by telephone for almost an hour. Subsequently, the White House issued a statement in which it said, “President Biden urged Russia to de-escalate tensions with Ukraine. He made clear that the United States and its allies and partners will respond decisively if Russia further invades Ukraine. President Biden also expressed support for diplomacy, starting early next year with the bilateral Strategic Stability Dialogue, at NATO through the NATO-Russia Council, and at the Organization for Security and Co-operation in Europe. President Biden reiterated that substantive progress in these dialogues can occur only in an environment of de-escalation rather than escalation.” In speaking with reporters the next day,  Biden said, “I made it clear to President Putin that if he makes any more moves, if he goes into Ukraine, we will have severe sanctions. We will increase our presence in Europe, with our NATO Allies, and there will be a heavy price to pay for it. He laid out some of his concerns about NATO and the United States and Europe, and we laid out ours. And we said we’d begin to negotiate some of those issues. But I made it clear that it only could work if he de-escalated….We made it clear that he cannot—I emphasize cannot—move on Ukraine.”

“Both leaders expressed willingness to engage in a serious and substantive dialogue on these issues. It was confirmed that the negotiations would take place first in Geneva on January 9-10 and then as part of the Russia-NATO Council in Brussels on January 12. Negotiations are also to be held at the OSCE on January 13. The presidents agreed to personally supervise these negotiating tracks, especially bilateral, with a focus on reaching results quickly. In this context, Joseph Biden emphasised that Russia and the US shared a special responsibility for ensuring stability in Europe and the whole world and that Washington had no intention of deploying offensive strike weapons in Ukraine. Vladimir Putin gave an exhaustive response to the mention once again by Joseph Biden of the possibility of imposing “large-scale” sanctions in the event of an escalation of the situation around Ukraine. He suggested that this would be a grave error, de facto fraught with the danger of a complete breakdown in Russia-US relations. Overall, the conversation took place in a frank and business-like atmosphere and it was certainly of benefit to both parties. The leaders agreed to continue regular contacts at the highest level.”

Yesterday, Biden spoke again by phone with Zelenskyy. Subsequently, the White House issued a statement which said Biden “made clear that the U.S. and its allies and partners will respond decisively if Russia further invades Ukraine. The leaders expressed support for diplomatic efforts, stating next week with the bilateral Strategic Stability Dialogue, at NATO through the NATO-Russia Council, and at the OSCE. President Biden underscored the commitment of the U.S. and its allies and partners to the principle of “nothing about you without you.” He reaffirmed the U.S.’s commitment to Ukraine’s sovereignty and territorial integrity. He also expressed support for confidence-building measures to de-escalate tensions in Donbas and active diplomacy to advance the implementation of the Minsk Agreements, in support of the Normandy Format.”

The last sentence in the White House statement is an important one. Given the diametrically-opposed “red lines” of the U.S. and NATO—that any nation that wishes to become a member of NATO may do so once it qualifies for membership—and Russia – that Ukraine can never become a member of NATO and NATO must not expand eastward—and the fact that there’s no reason to think that either side will modify, let alone abandon, those “red lines,” the probability of the U.S., NATO and Russia achieving an agreement that would prevent a large-scale Russian military intervention in Ukraine would seem to be very low. But as low as that probability may be, it is nevertheless possible the two sides could reach an agreement that would persuade Russia not to intervene militarily in Ukraine without the U.S. and NATO amending their view that it is up to Ukraine, and only Ukraine, to decide if it wishes to be a member of NATO. One necessary condition for such an agreement—certainly not a sufficient condition but nevertheless a necessary condition—may be the full implementation by Ukraine of the February 2015 Minsk Agreement agreed by President Putin, President Petro Poroshenko of Ukraine, President François Hollande of France, and German Chancellor Angela Merkel. In that agreement, known as Minsk 2—the first Minsk agreement was concluded in September 2014 and called for an OSCE-monitored ceasefire, an exchange of prisoners, and mutual withdrawal of forces and weapons—the leaders agreed to an immediate and full ceasefire; the mutual withdrawal of all heavy weapons to create a wide buffer zone; effective monitoring of the ceasefire and withdrawal of heavy weapons by the OSCE; the release of all hostages and detainees; the withdrawal of all foreign armed groups, weapons and mercenaries from Ukrainian territory to be monitored by the OSCE; unimpeded delivery of humanitarian aid and restoration of social and economic services in affected areas; and, importantly, constitutional reform that would provide for significant decentralization and autonomy for the Donetsk and Luhansk regions and other areas in eastern Ukraine in which substantial portions of the populations are ethnic Russians and identify Russian as their native language; the adoption of permanent laws on the special status of those areas; local elections based on those laws and constitutional reforms; and, once those elections take place, restoration of full control by Ukraine over its border throughout the conflict zones.

Ukraine has been dragging its feet for the last seven years on implementing Minsk 2 and has focused, instead, on strengthening, with U.S. and NATO advice, equipment and financial assistance, its military capabilities; continuing its “frozen conflict” with the pro-Russian separatists who control large portions of the Donetsk and Luhansk regions; and eventually regaining control of that territory. It was the possibility that it might attempt the latter that prompted the Russian buildup of troops and there can be little doubt that, notwithstanding the warnings of serious consequences from Biden, NATO and others, Russia would indeed intervene militarily if Ukraine attempted to do that. Rebuilding its military is fine. But Ukraine needs to realize that any attempt to retake by force the territory in eastern Ukraine controlled by the separatists will only lead to a Russian intervention and possibly the creation of another Abkhazia, this one named Donbas. Ukraine must focus, instead, on implementing Minsk 2. The time for foot-dragging is over.

David R. Cameron is a professor emeritus and lecturer in political science and the former director of the MacMillan Center’s Program in European Union Studies.