What Americans should learn from Belarus 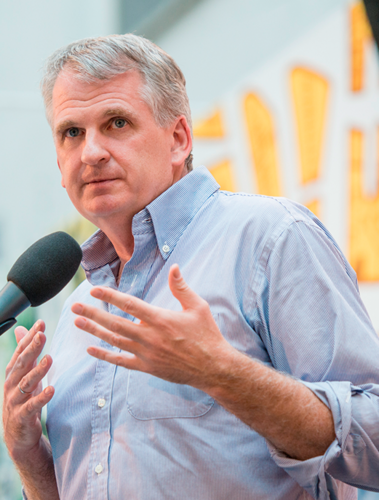 The following opinion piece written by Timothy Snyder, Levin Professor of History and the author of “On Tyranny: Twenty Lessons from the Twentieth Century,” appeared in the Washington Post on August 16:

Those Americans who believe that the Democrats are their best hope for thwarting the rise of authoritarianism must confront a basic question: Given that President Trump intends to spoil the elections if he can’t win them, how do citizens ensure that November’s victors take office? As Kamala D. Harris and Joe Biden dominate the news, we have looked past Belarus, whose courageous citizens show us the way. In this post-Soviet republic, run for a quarter-century by the same man, we have a refreshing example of how to face the worst — and win.

The predicament of Belarusans after the rigged presidential election of Aug. 9 is a sharpened preview of what Americans will face this November. The local dictator, Alexander Lukashenko, responded to the outbreak of covid-19 with magical thinking. As the economy crumbled, his opponents realized that they enjoyed a majority. When Lukashenko claimed an improbable victory after the election, Belarusans took to the streets. They were beaten and detained by riot police; Russian President Vladimir Putin sent his congratulations to Lukashenko. It is not hard to imagine that Trump and Attorney General William P. Barr would be satisfied with a similar turn of events here in November.

Yet the Belarusan story did not end there, because Belarusans were prepared and did not give up. They came out again, all over the country, in smaller groups that were harder to disperse. Avoiding direct clashes with security forces, they made their presence known with the colors they wore, the flags they waved and the posters they held. Onlookers applauded from their apartments, pedestrians flashed the V sign and drivers honked their horns in support.

On Tuesday, Belarusans were horrified by footage of police beating men and threatening to rape women. On Wednesday, parents gathered outside detention centers, demanding to see their children. That same day, women wearing white formed human chains to stop violence, and doctors demonstrated in front of their hospitals. Some policemen filmed themselves throwing their uniforms into the garbage, expressed solidarity with protesters or even changed sides. The minister of internal affairs, roughly the Belarusan equivalent of acting homeland security secretary Chad Wolf, apologized for the beatings and detentions.

On Thursday, four days after the election, some of the detained protesters were released. They had been forced to adopt humiliating positions while in custody and have the red, black and blue of truncheon beatings on their backs, buttocks and legs. Outrage was general. Factory workers went on strike. A factory manager tried in good old Soviet style to call his workers together in support of Lukashenko. They told him that they had all voted for the opposition candidate. Most people had. First, one election official, and then a second, admitted that the official result had been falsified.

Americans have had other things on our minds this past week, but this is no excuse for looking the other way as others defend values we claim to hold dear. Yet even if we missed what happened Minsk, people in Minsk had learned from Minneapolis. The rhetoric and tactics in the cities and towns of Belarus carried echoes of Hong Kong; Khabarovsk, Russia; and Portland, Ore. Protesters around the world increasingly learn from one another.

Just as Trump is already preparing to do, Lukashenko was counting on the support of his cronies among local election officials, police and Russia. We cannot know whether his opponents will succeed: Unlike the United States, where the most effective Russian intervention comes through the Internet, in Belarus, Putin and Lukashenko can threaten an invasion.

As Americans think ahead to November, we should learn from people who have taken risks for democracy, in circumstances more challenging than our own. Belarusans teach us what I would call “the six Ps” of defending an electoral victory against authoritarian chaos: preparation, predominance, protest, peace, persistence and pluralism.

Preparation means understanding that your local authoritarian will spoil the election and planning in advance. Predominance means getting out the vote and winning by a wide margin, so everyone will know that the authoritarian is lying. Protest means taking the streets when the authoritarian makes his move. Peace means keeping demonstrations nonviolent as the regime discredits itself with violence. Persistence means coming back anyway the next day, and the day after that. And pluralism is a summons to groups, such as those Belarusan workers, women and doctors, to make their presence and their feelings known.

Democracy is a value, so it must be valued, and it is a practice, so it must be practiced. If we want it, we must be open to learning from others, and then be prepared to take responsibility for ourselves.