What can European history teach us about Trump’s America? 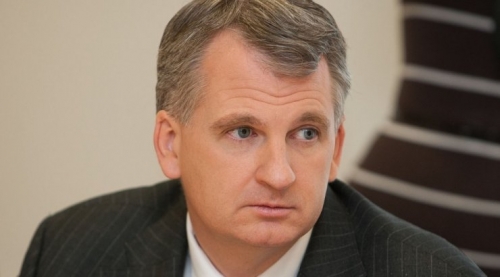 The recent U.S. election raises questions about broader movements that allowed Trump – as well as numerous other leaders around the world – gain popularity. Amid these concerns, Yale undergraduate Declan Kunkel worked with the MacMillan Center and Yale Political Union to co-host Professor Timothy Snyder, the Housum Professor of History at Yale and a permanent fellow at the Institute for Human Science in Vienna, to discuss how lessons from European History could shed new light on Trump’s America. (view video)

Professor Snyder began in broad philosophical strokes by discussing the relationship between politics and history. “History,” he said, “has to be political.” He encouraged the audience to “think historically,” saying “in so far as you think historically you have a political imagination.” He pointed out that because “nothing is entirely old, there is only one history,” which is comforting because “nothing is entirely new either.”

He then discussed different, “anti-historical” ways to view the concept of time. One such method, which he termed the “politics of inevitability,” is characterized by confidence in knowing where the world is headed. Professor Snyder criticized how there is a notion, especially in the West, that the world will work out in the end as all countries inevitably become liberal democracies. “This is such a fallacy,” he said. The politics of inevitability are anti-historical because “you don’t need history because you don’t need imagination… you already know where everything is going to go.” Professor Snyder pushed back against the idea that history trends towards justice by declaring, “There’s no arc of history… Sorry!”

He then discussed the “syndrome of boredom,” which is marked by “the absence of alternatives.” Using the U.S. two-party system as an example, Professor Snyder noted, “If you accept there are no alternatives, politics becomes unbelievably boring.” He then linked the word “neoliberalism” to the syndrome of boredom by calling it “a word of critique that fails to critique” and suggesting that “people say neoliberalism when they mean the lack of alternatives.”

According to Professor Snyder, the United States is leaving the politics of inevitability and headed toward the politics of eternity. Today’s challenge, then, is to “stop from slipping from one to the other.”

Regarding the rise of fascism and communism in 20th century Europe, he noted that “inequality matters a lot.” Fascism promised to protect the national economy from the global one and communism promised to protect the individual against domestic inequality. Though both of these movement were ultimately unsuccessful, he warned against portraying them as inherently bad because then “we forget why those things were attractive.”

Professor Snyder examined different warning signs in a society headed toward the politics of eternity. He talked about the gradual, almost subversive, transformation to a one party system; the de-monopolization of violence as the government begins to support paramilitary groups that are outside the government;  the creation of a “politics of emergency” that allows actors to gain legitimacy by claiming to react against the nonexistent emergency; the “suspension of the state” that is often done by declaring a state of emergency; and finally, Professor Snyder warned against the personification of victims by those in power, such as the Nazis who “put all the negative forms of globalization inside [the Jews].”

He then gave a few general recommendations going forward. Drawing from the lesson learned in World War II, he argued, “you can repair liberalism… by way of economic policy.” Additionally, the end of the second world war proved that countries can work together despite differences. Then, Professor Snyder discussed how Eastern European had to rethink liberal and democratic theory after the war. According to him, they “realized that language… is extremely important.” He pointed to parallels in the contemporary world and called for people to read rather than watch the news. “If you just watch television or your own Facebook feeds,” he said, “you get the same words over and over again and the words start to speak through you, rather than you choosing the words yourself.”

Professor Snyder warned the audience against conformism, which he defined in the context of self-censorship, or when individuals use their gifts to obtain a certain goal that is made desirable by those in power. He said that the moments when freedom is at stake is when “freedom feels awkward.”

He ended the talk with a prognosis. The current generation, he said, has a chance to get people to think historically again. He suggested that there there is no medium between being great and being forgotten by saying, “You’ll be remembered… as a historical generation or not at all.”