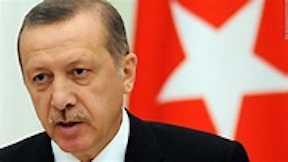 The following article written by Alan Mikhail, Professor of History and Chair of the Department of History, appeared in Time on September 3:

At the end of August, Turkey’s president Recep Tayyip Erdogan celebrated the Islamic New Year with aplomb. Fresh off his conversion of the monumental Haghia Sophia to a mosque, he converted another former Byzantine church, the fourth-century Chora church, one of Istanbul’s oldest Byzantine structures. The day after that he announced the largest ever natural gas depository in the Black Sea. This followed another recent discovery of natural gas fields in the eastern Mediterranean. Both of these areas are hotly contested zones of international competition between the powers around these seas. Later that week he welcomed a delegation of Hamas to Ankara, where he expressed support for Palestinians in the wake of the recent announcement of an agreement between Israel and the UAE.

All of these moves project Erdogan’s vision of Islamist strength into the world. Standing up for Islam at home goes hand in hand with securing natural resources and imposing Turkey’s power abroad. It also goes hand in hand with domestic repression. The Islamic New Year saw Erdogan further tighten his grip on social media freedom and consider pulling Turkey out of what is known, now farcically, as the 2011 Istanbul Convention, a treaty of the Council of Europe that commits countries to protecting women from domestic violence. Democratic peoples in Turkey, the Middle East, and around the world should worry.

Much has been written about Erdogan’s attempts to “resurrect” the Ottoman Empire or to style himself a sultan. There is truth here. But to understand Erdogan’s political agenda and horizon we must be specific about which Ottoman sultan Erdogan strives to be. It is the empire’s ninth sultan, Selim I.

Selim died 500 years ago in 1520. It was during his lifetime that the Ottoman Empire grew from a strong regional power to a gargantuan global empire. For Erdogan, this sultan from half a millennium ago serves his contemporary needs. Selim in many ways functions as Erdogan’s Andrew Jackson, a figure from the past of symbolic use in the present. Selim offers a template for Turkey to become a global political and economic power, with influence from Washington to Beijing, crushing foreign and domestic challengers alike. He helps Erdogan too to make his case for Islam as a cultural and political reservoir of strength, a vital component of the glories of the Ottoman past, which he seeks to emulate in contemporary Turkey against the dominant elite secularism that has reigned since its founding.

We should be wary of Erdogan’s embrace of Selim’s exclusionary vision of Turkish political power. It represents a historical example of strongman politics that led to regional wars, the attempted annihilation of religious minorities, and the monopolization of global economic resources. In addition to his attempts to monopolize natural gas reserves around Turkey, today this takes the form of Erdogan’s foreign military ventures in Libya, Syria, and Yemen. At home, he has gone after Turkey’s Shiite community, Kurds, intellectuals, Christians, journalists, women, and leftists. Erdogan cultivates his own Sunni religiosity to position Islam at the center of Turkey’s domestic agenda, with the church conversions the most potent recent symbols of this. Erdogan’s represents a political logic of zero-sum competition that pits Turkey against Saudi Arabia and Iran for control of the region and over claims of global Islamic leadership.

Erdogan likes Selim because he made Turkish global political power possible. From 1517 through the end of World War I, the Ottoman Empire maintained the geographic shape Selim won for it, dominating the Middle East and the eastern Mediterranean. In 1517, the Ottomans defeated their major rival in the region, the Mamluk Empire based in Cairo, capturing all of its territory in the Middle East and North Africa. This more than doubled the empire’s size. This explosion of the Ottoman Empire into the Middle East turned it into the region’s foremost military and political power and one of the world’s largest states. The Ottomans now controlled the entire eastern half of the Mediterranean and thus dominated the globe’s most important trade routes overland between Europe and Asia and by sea through the Persian Gulf and Red Sea. The Turkish Republic inherited much of that power after the empire’s demise and the republic’s rise in 1923.

While every modern Turkish ruler has distanced himself from the legacy of the Ottoman Empire, and Islam, to attempt to project a more “western,” “secular,” and “modern” face for the republic, Erdogan is the first who has actively embraced the Ottoman past and the empire’s Islamic heritage. Here too Selim proves key to Erdogan’s image of his rule. Selim’s defeat of the Mamluks made the Ottoman Empire a majority Muslim state for the first time in its history, after over two hundred years of being a state whose population was mostly Greek Orthodox. With this victory, Selim became the first Ottoman sultan to rule Mecca and Medina, Islam’s holiest cities, thus earning the title of caliph and cementing the empire’s global Islamic credentials. If Selim was the first Ottoman to be both sultan and caliph, Erdogan is the first republican leader to profess to possessing both titles.

Like President Donald Trump’s purposeful deployment of the symbols of Andrew Jackson—prominently displaying his portrait in the Oval Office and defending his statues—Erdogan has trafficked publicly and specifically in the symbolic politics of Selim in Turkey. His most striking act was to name the recently constructed third bridge over the famous Bosphorus Strait after Selim. Erdogan has also lavished enormous resources on Selim’s tomb and other memorials to his rule. After winning a 2017 constitutional referendum that greatly expanded his powers—a process marred by irregularities—Erdogan made his first public appearance at Selim’s tomb. Staged as a kind of pilgrimage, there Erdogan returned to the long-dead sovereign his kaftan and turban that had been stolen years before. This far-from-subtle first act after winning a referendum that gave him near-limitless power made clear who Erdogan’s role model is.

Erdogan and his Islamist party colleagues regularly describe themselves as the “grandchildren” of the Ottomans. In this very pointed genealogy, Erdogan purposefully skips a generation—that of Turkey’s republican fathers since 1923—to leapfrog back in time to when the Ottomans ruled the globe with their particular brand of Turkish Sunni politics, to Selim’s day when wars and domestic repression led to wealth and territorial power. Recreating a political program akin to Selim’s is a dangerous prospect for Turkey and the Middle East and indeed the world. To make Turkey Ottoman again requires the kind of violence, censorship, and vitriol that Erdogan has indeed shown himself ready to use. The universal lesson here is that calls for returns to perceived greatness, whether in Turkey or in United States, selectively embrace controversial historical figures, mangle their history, and elevate hatred and division.