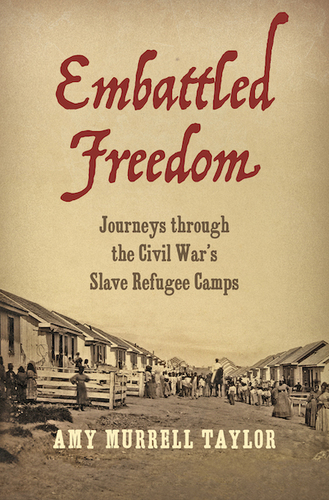 Yale University’s Gilder Lehrman Center for the Study of Slavery, Resistance, and Abolition announces the winner of the 21st annual Frederick Douglass Book Prize. The 2019 winner of the prize is Amy Murrell Taylor for Embattled Freedom: Journeys through the Civil War’s Slave Refugee Camps (University of North Carolina Press). Taylor holds the Theodore A. Hallam Professorship in History at the University of Kentucky.

One of the most coveted awards for the study of global slavery, the Frederick Douglass Book Prize is sponsored jointly by the Gilder Lehrman Institute of American History and the Gilder Lehrman Center for the Study of Slavery, Resistance, and Abolition at the MacMillan Center at Yale University. The $25,000 award for the best book published in English on slavery, resistance, or abolition will be presented to Taylor at a celebration in New York City on February 13, 2020. The celebration also will present a Special Achievement Award to Julius S. Scott’s The Common Wind: Afro-American Currents in the Age of the Haitian Revolution (Verso). Scott is Lecturer of Afroamerican and African Studies, Emeritus, at the University of Michigan.

In addition to Taylor, the other two finalists for the prize were Jessica A. Krug for Fugitive Modernities: Kisama and the Politics of Freedom (Duke University Press) and Brooke N. Newman for “A Dark Inheritance: Blood, Race, and Sex in Colonial Jamaica” (Yale University Press). The February ceremony will recognize all four books for their depth of research, originality, methodological sophistication, and literary merit.

Jury chair Manisha Sinha noted that Amy Murrell Taylor’s Embattled Freedom: Journeys through the Civil War’s Slave Refugee Camps is both beautifully written and “an extraordinary contribution to the history of emancipation and the American Civil War.” Original and nuanced, the book balances triumphant and pessimistic narratives of the wartime destruction of slavery, revealing the stories of individuals that inform the larger history of the thousands of African Americans who made their way to refugee camps. Sinha commented that the  author’s analysis of the “politics of survival”—securing work, finding shelter, battling hunger, clothing bodies, and keeping faith—makes this book a masterwork of research and narration. “Taylor’s meditations on the difficult yet inspirational refugee experience of freedpeople,” said Sinha, “is an outstanding scholarly achievement that carries a timeless message for our own fraught times.” 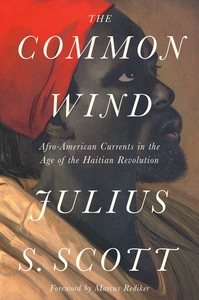 The Frederick Douglass Book Prize jury and review board also recognize the singular impact of Julius Scott’s The Common Wind on the study of slavery, resistance, and abolition. As jury member Vincent Brown observed, “in 1986, when Scott defended his Duke University PhD dissertation, no one spoke of ‘The Black Atlantic.’ Art historian Robert Farris Thompson had named the subject a few years before and it would find full expression in the work of Paul Gilroy, but none could predict that it would become one of the most vibrant subfields in the historical profession.” The dissertation drew upon a wealth of sources to document a turbulent world of news, rumor, and politics during the Age of Revolution in the Americas. It was a work so original and profound, Brown added, that “young history graduate students used to pass it around like an underground mix-tape, inspiring an entire generation to create a new fields of knowledge about the past.” The recent long-awaited publication of The Common Wind as a book heralds the extension of Scott’s influence to a whole new generation of scholars.

The Frederick Douglass Book Prize was established by the Gilder Lehrman Institute and Gilder Lehrman Center in 1999 to stimulate scholarship in the field by honoring outstanding accomplishments. The award is named for Frederick Douglass (1818–1895), the one-time slave who escaped bondage to emerge as one of the great American abolitionists, reformers, writers, and orators of the nineteenth century.

Now celebrating its twenty-fifth year, the Gilder Lehrman Institute of American History was founded in 1994 by Richard Gilder and Lewis E. Lehrman, visionaries and lifelong supporters of American history education. The institute is the leading nonprofit organization dedicated to K-12 history education while also serving the general public. With a focus on primary sources, the Gilder Lehrman Institute illuminates the stories, people, and moments that inspire students of all ages and backgrounds to learn and understand more about history. Through a diverse portfolio of education programs, including the acclaimed Hamilton Education Program, the Gilder Lehrman Institute provides opportunities for more than five million students, 40,000 teachers, and 23,000 schools worldwide. The Institute’s programs have been recognized by awards from the White House, the National Endowment for the Humanities, the Organization of American Historians, and the Council of Independent Colleges. For further information, visit gilderlehrman.org or call (646) 366-9666.