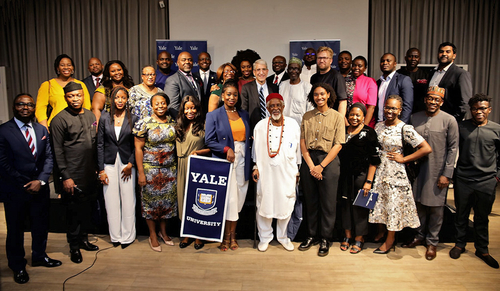 Yale University President Peter Salovey arrived in Nigeria Jan. 15 to continue his leadership of the Yale Africa Initiative, a long-term, university-wide commitment to enhance Yale’s ongoing bilateral engagement with African institutions and to bring African scholarship, research, and education at Yale into sharper focus. Over four days, he will participate with university collaborators in meetings, events, tours, and other activities to build and strengthen Yale’s research and educational partnerships across the continent.

“In a world that is growing in complexity and becoming more interrelated, successful universities will embrace global networks and exchanges,” Salovey said as he arrived in Lagos, Nigeria’s biggest city, with a delegation of Yale faculty and staff members. “While in Nigeria, home to the continent’s largest economy, I am looking forward to meeting with some truly extraordinary people. With this visit I hope to build on Yale’s robust relationships in Nigeria and other nations in Africa to strengthen education, research, and scholarship in the global community.”

The forum is part of a flagship program established in 2015 and sponsored by Yale in partnership with Fundación Mujeres por África and Banco Santander. It aims to amplify the effectiveness and influence of women in African governments by serving as a catalyst for open dialogue and fostering mentoring relationships between one generation of African women leaders and the next.

The forum will feature personal leadership testimonials from a panel of program alumni. They include Obiageli Ezekwesili (from Nigeria), N’Diaye Ramatoulaye Diallo (Mali), Maria Kiwanuka (Uganda), Remi Sonaiya (Nigeria), and Nana Oye Lithur (Ghana). The discussion will be moderated by Olabosipo Sawyerr-Bassey, SOM 2007, from Nigeria, and Stephanie Busari, a journalist and editor at CNN International, based in Nigeria. A special session of the program will focus on reaffirming the commitment to and developing leadership approaches toward the achievement of the UN sustainable development goals.

The forum will conclude with remarks from Obiageli Ezekwesili, Richard von Weizsäcker Fellow at the Robert Bosch Academy in Berlin, presidential candidate in Nigeria’s 2019 election, and former vice president for the World Bank’s Africa Region.

Salovey’s trip also includes a visit to the Lagos campus of Pan Atlantic University, where he will meet with Enase Okonedo, dean of Lagos Business School, and members of the school’s leadership team. Salovey will deliver a lecture to students, faculty, and invited guests on the topic of “Emotional Intelligence and Leadership in Business.” Following his talk, Salovey will participate in a question-and-answer session with audience members.

The Lagos Business School, along with three other schools in Africa, is a member of the Global Network for Advanced Management, a network of over 30 business schools around the world launched in 2012 by Yale and other institutions.

While in Lagos, Salovey also will meet with officials to finalize plans to expand the HAPPINESS Project (Health Action for Psychiatric Problems In Nigeria including Epilepsy and Substances), an ongoing Yale partnership with the government of Imo State, Nigeria. This pioneering program aims to increase access to effective, evidence-based treatments for mental and neurological disorders in underserved areas of the country, using technology and existing care infrastructure.

The HAPPINESS project oversees the training of primary care workers in rural communities to screen for, assess, and manage these disorders in their communities. Initiated in 2018, the project is a collaboration between Yale School of Medicine’s Department of Psychiatry and Imo State University Teaching Hospital. It is supported by the Yale Global Mental Health Program, CBM International, and the Imo State Primary Health Care Development Agency.

Yale has three alumni clubs across Africa — in Nigeria, Ghana, and South Africa. During Salovey’s visit, he will participate in a networking reception with officials and members of the Yale Club of Nigeria. The event will include Haroun Adamu (Yale College Class of 1970) and Lawrence Fubara Anga (Yale College Class of 1980), the president and vice president, respectively, of the Yale Club of Nigeria.

Early in his trip, Salovey will visit Heirs Holding, a pan-African financial services institution, where he will discuss African entrepreneurship with the CEO of the Tony Elumelu Foundation, Ifeyinwa Ugochukwu. Salovey will also visit Techpoint, the largest tech media agency in Africa, where he will participate in a town hall-style meeting and interactive discussion with key leaders in the Lagos technology entrepreneurship ecosystem.

Back in New Haven, plans are underway for a 2021 exhibition at the Yale University Art Gallery dedicated to the work of the 20th-century Nigerian sculptor Bámgbóyè. It will feature a number of works on loan from Nigeria’s National Museum, which Salovey will tour with Edith Ekunke, head of museums for the National Commission for Museums and Monuments; Omotayo Adeboye, curator at the National Museum; and James Green, assistant curator of African art at Yale University Art Gallery. The group will discuss a planned collaborative research and conservation project, in partnership with Yale’s Institute for the Preservation of Cultural Heritage, which will involve in-depth research into the works on loan along with the training of National Museum conservation staff in Lagos and New Haven.

The Yale Africa Initiative is a commitment announced by Salovey in his inaugural remarks in 2013 to foster new directions in research on Africa, and to identify new partnerships and deepen current ones, all while transforming the educational experiences and career opportunities of students at Yale and in Africa. Through the Yale Africa Initiative, Yale continues to leverage the power of partnerships and global networks across the continent to create new knowledge in science, public health, business, and other disciplines — and to improve lives around the globe.