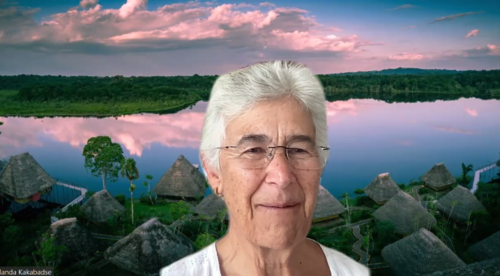 On March 11, CLAIS presented an exchange between two policy leaders to shed light on the climate crisis in Latin America. Panelist Yolanda Kakabadse and moderator Jessica Faieta convened over Zoom as part of the Latin American Policy Leader Series. They answered live questions from dozens of guests from Yale and throughout the Americas, speaking in Spanish with live interpretation.

The session, titled “The Impact of Climate Change in Latin America,” was introduced by Claudia Valeggia, CLAIS Chair and Professor of Anthropology. Valeggia presented the panelists by giving background information about their work and experience as leaders of climate policy in Latin America and gave thanks to the supporters and co-sponsors of the event including the George Herbert Walker, Jr. Lecture Fund, CLAIS, the Fox International Fellowship, the Program on Peace and Development, and the Yale Office of International Affairs.

Yolanda Kakabadse, former  minister of the environment for Ecuador and former president of World Wildlife Fund International, took center stage by addressing the necessity for a reconstruction of the perspctive from which climate change is viewed. Calling for sustainability, Kakabadse mentioned the discrepancy between the desire for “returning to normalcy” from the COVID-19 pandemic and the desire for the implementation of new sustainable practices.  Kakabadse emphasized the connotation of the word “change” and used it to express the importance of calling the climactic phenomena we see today a climate crisis rather than climate change. Kakabadse also claimed that changing the perspective of urgency over the climate crisis can be attributed to the inaccessibility of scientific information on the subject, where articles and research carried out are worded in unintelligible language that the regular citizen cannot understand, and therefore cannot act on.

Faieta and Kakabadse then focused on the unhealthy consumer culture of the Anthropocene. They addressed the stark and needless waste that comes from consumer culture in the Americas where people are buying 3 for the price of 1 only to satisfy an unconscious economic desire to spend money and consume products. The speakers also addressed the sustainability and ethics of agricultural production techniques and food processing, shipping, storage, and waste systems in use by restaurants and food delivery processes.

On various occasions through the talk, Kakabadse called attention to the richness of Latin American land, resources, and biodiversity. She emphasized the comparative pulchritude of the region and articulated the mistreatment of the environment on the part of organizations, production processes, and general consumers. Nearing the end of the event, Kakabadse made it clear that to address the climate crisis properly, Latin America would have to improve on four things: awareness and consciousness about the region’s environmental richness, recognizable and accessible science and research, industrial sustainability practices, and promotion of safe consumerism with new technologies.

The panel discussion ended with the moderation of various questions from the Q&A function on Zoom answered live by Yolanda Kakabadse. These questions covered topics like the role of government in conservation and sustainability practices and the role of the student and educator in the successful promotion of sustainability.

Kakabadse’s finishing remark made it clear that the climate crisis does not have borders and that it is the duty of everyone to think and work together on how to best to conserve Latin America’s biodiversity for future generations.