Book Launch - Toward Xenopolis: Visions from the Borderland 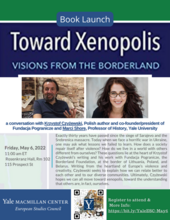 Toward Xenopolis - A conversation with Krzystof Czyżewski and Marci Shore
Exactly thirty years have passed since the siege of Sarajevo and the Srebrenica massacre. Today when we face a horrific war in Ukraine, one may ask what lessons we failed to learn.
How does a society repair itself after violence? How do we live in a world with others different from ourselves? These questions lie at the heart of Krzystof Czyżewski’s writing and his work with Fundacja Pogranicze, the Borderland Foundation, at the border of Lithuania, Poland, and Belarus. Writing from the heartland of Europe’s violence and creativity, Czyżewski seeks to explain how we can relate better to each other and to our diverse communities. Ultimately, Czyżewski hopes we can all move toward xenopolis, toward the understanding that others are, in fact, ourselves.
Please join us for a conversation with Krzystof Czyżewski and Marci Shore, Professor of History at Yale University
Krzystof Czyżewski is a practitioner of ideas, writer, philosopher, culture animator, theatre director, editor. He is co-founder and president of the Borderland Foundation (1990) and director of the Centre “Borderland of Arts, Cultures and Nations” in Sejny. Together with his team, in Krasnogruda on the Polish-Lithuanian border he revitalized a manor house once belonged to Czesław Miłosz family, and initiated there an International Center for Dialog (2011). Among his books are: The Path of the Borderland (2001), Line of Return (2008), Trust & Identity: A Handbook of Dialog (2011), Miłosz – Dialog – Borderland (2013), Miłosz. A Connective Tissue (2014), The Krasnogruda Bridge. A Bridge-Builder’s Toolkit (2016), A Small Center of the World. Notes of the Practitioner of Ides (2017, Tischner Award for the best essayist book of the year), Żegaryszki (2018, haiku poems), and Towar Xenopolis (2019). Initiator of intercultural dialogue programs in Europe, Caucasus, Israel, Central Asia, Indonesia, Bhutan and USA. Teacher and lecturer, a visiting professor of Rutgers University and University of Bologna. He received the title of the Ambassador of European Year of Intercultural Dialog (Brussels). He is a laureate of Dan David Prize 2014 and Irena Sendlerowa Prize 2015. Together with the Borderland team he is the 2018 Princess Margriet European Award for Culture (Amsterdam) laureate.
Register to attend (in-person): https://bit.ly/YaleESC-EventRegistration
Location: Rosenkranz Hall, Rm 102, 115 Prospect St.
Open to the Community: one must be vaccinated for Covid-19 and asymptomatic. Registration is required. Attendees are recommended to wear a mask
The event is presented by the European Studies Council of the Yale MacMillan Center