CMES Colloquium: The Writers’ ‘Preschool’: The Writers’ Union, Cultural Intermediaries, and the Making of a Soviet Public in Uzbekistan 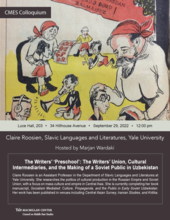 Hosted by Marjan Wardaki
Claire Roosien is an Assistant Professor in the Department of Slavic Languages and Literatures at Yale University. She researches the politics of cultural production in the Russian Empire and Soviet Union, with a focus on mass culture and empire in Central Asia. She is currently completing her book manuscript, Socialism Mediated: Culture, Propaganda, and the Public in Early Soviet Uzbekistan. Her work has been published in venues including Central Asian Survey, Iranian Studies, and Kritika.