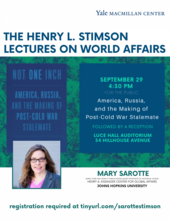 Mary Elise Sarotte is the inaugural holder of the Marie-Josée and Henry R. Kravis Distinguished Professorship of Historical Studies at Johns Hopkins School of Advanced International Studies (SAIS). Sarotte earned her AB in History and Science at Harvard and her PhD in History at Yale University. She is the author or editor of six books, including most recently ‘Not One Inch: America, Russia, and the Making of Post-Cold War Stalemate’, along with ‘The Collapse: The Accidental Opening of the Berlin Wall’ and ‘1989: The Struggle to Create Post-Cold War Europe’, both of which were selected as Financial Times Books of the Year, among other distinctions and awards. Following graduate school, Sarotte served as a White House Fellow, then joined the faculty of the University of Cambridge, where she received tenure before accepting an offer to return to the United States and teach at the University of Southern California. Sarotte is a former Humboldt Scholar, a former member of the Institute for Advanced Study in Princeton, an associate at Harvard University’s Center for European Studies, and a member of the Council on Foreign Relations.
Dr. Sarotte will deliver three lectures this year related to her book ‘Not One Inch: America, Russia, and the Making of Post-Cold War Stalemate’. This event will be followed by a small reception.
The Stimson Lecture Series is held in honor of Henry L. Stimson, Yale College 1889, an attorney and statesman whose government service culminated with his tenure as secretary of war during World War II. Since 1998, the MacMillan Center and the Yale University Press have collaborated to bring distinguished diplomats and foreign policy experts to the Center to lecture on their books that are published by the Yale Press.